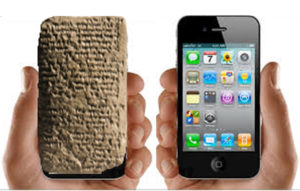 I recently received a letter (not in email; a paper letter) from one of my granddaughters. It is a treasure that will keep, as I have for many years with all handwritten letters and post cards. But this one was in printed letters. They don’t teach cursive writing in elementary and secondary schools any more.

There was a time when it was said—and it was said mostly of women—that “she writes a fine hand.” Good handwriting used to be an index of good breeding, or good education (as well as good hand-to-eye coordination); well-formed words were considered the proper vehicle for well-chosen words. Here we a speaking (or I am typing) of the cursive hand, which I recently learned came about because early inks had a tendency to make blots when the pen was lifted from the paper, so printed letters were messy. Learning that fact reminded me of how the nuns taught “penmanship” (should be penwomanship) in elementary school, where good writing was closely related to composure and self-control, maybe even godliness.

In my Roman Catholic elementary school we were given a rough, soft, brownish paper and required to buy pens that took an inserted “nib” that had a tip like a stiletto. There were inkwells in our desks that I learned were for more than dunking girls’ pigtails into. Practicing the “Palmer Method” swooping letters on this paper without blotting or tearing straight through the ink-sponging paper required the dexterity of a pediatric surgeon, or delicate touch of a girlish hand (I truly believe this is the origin of young boys’ hatred of girls). Without the right pen angle, the exact pressure, and the carefully-dipped amount of ink my brownish toilet-paper half sheets looked like Rorschach images. The wonder is that I ever wrote again (something my readers regret I overcame). But the ballpoint pen came along (the nuns claimed it was invented by the Devil) and I was rescued. Still, I prefer writing with a very good fountain pen; something about that liquid ink that soaks into the fiber of the paper has a fresco feeling to it.

In 1989, the first time I taught at the University of Paris I opened my first class as usual with a recitation about my academic requirements. When I got to the point where I noted that written assignments had to be submitted in doublespaced type there was an audible gasp in the room. When I asked what the problem was I discovered that only a few of the nearly 100 students I had in the class owned a typewriter. French students were still submitting their work hand written. Their penmanship was generally quite good (although distinctively French in form) and I was amused that they used white-out over errors and changes because they submitted their work in ink. I wonder whether computers have finally overtaken handwriting in French universities.* Back at American universities typewriters were commonplace and computers we’re making typewriters obsolete (and soon dictation software might make key entering obsolete). One outcome of this was that computer-processed written assignments produced work spellchecked and delivered in attractive fonts, bold for emphasis and italics. Profs now had to get past the aesthetics to discover that much of it was the same old bullshit and sloppy thinking. When students write these days (when required to write at all) it seems that mostly print (block lettering referred to as “manuscript”).

For me making good letters also means making good letters in the epistolary sense of the word. I annoy my friends and relatives by asking them to send me postcards when they are traveling. I know that it forces them to write in addition to buying a postcard and stamps and finding a post box—all that could be avoided by sending a text or an email with a smartphone digital photo attached. I don’t just want to keep them from becoming lazy bastards, but my motives are much more existential.

Shortly after my wife, Patty passed away in 1985, we discovered that she had saved all the letters that I wrote to her back in a time before cell phones, texting, and email. During our dating years in college, we were separated into different Upstate New York cities over Summer vacations and we wrote letters to each other almost daily. (It was a long distance call, and those calls were expensive.) So it was a double shock as not only had I no idea she had preserved my letters to her over the years in a shoebox, I could not remember what I had done with those she wrote to me. They were lost. From just having her letters I could infer some things she had written to me; but it isn’t the same as having those letters. Since then I have not only kept safe those letters but every piece of mail I have received from family and friends in the years since. It’s not just the words; it’s also the very physicality of the document.

I first noted the changes taking place in epistolary communications in a piece I wrote while on sabbatical in Hong Kong.

POSTCARDS AND THE NEW MODEM OF COMMUNICATION

In 1997 I bought a tattered old postcard from a street vendor in Hong Kong. Its postal cancellation mark reads July 1, 1907.** Addressed in faded ink to a Dr. Chan in Edinburgh, Scotland, the message side is crammed with vertical Chinese ideographs. The profile of King Edward VII adorns the “hape’ny” (one-half penny) postage stamp. Somehow, sometime, the card made its way back to Hong Kong, perhaps with Dr. Chan.

Surely this postcard got to Edinburgh by steamer, maybe taking months to reach Dr. Chan (doctor of what, I wonder?) in his cold flat where it warmed him with some “news from home.” But how did it get back to Hong Kong? As part of his personal effects? By ship, or later by plane? And When? And where has it been all these years, during two world wars, the rise of Hong Kong to a great world city? Did it sleep away some ninety years in an attic somewhere, a desk drawer, tucked in a book? And how did it end up with a street vendor of philatelic flotsam?

There’s s snapshot of some past lives retained in that old postcard; like the way a fossil retains something of its “author”. It’s a record of time and sentiments gone by. That postcard is a relic of a medium of communication that I couldn’t help but contrast with my laptop computer, which was with me to assist in my work over a few months in Hong Kong. The computer would also be my primary mode of communication with family and friends back home. For the first time in a couple of decades of travel, I would be “on line”. No more trips to the post office or Amex; my new mode of communication would be “modem communication.”

It is difficult to gainsay the ease and speed of E-mail. Each day I would log on and read mail from my daughters, or various friends, keeping current with affairs at home as if I were in fact “at home.” I could even set up a private chat group with family and friends and exchange news in real time. And E-mail became especially valuable when my father had a serious illness and I needed to be in close contact with the family.

But as with most technologies there is a down side: The magician has his price. For me, so much of the allure of travel is related to being in a different time and place. The ubiquity of cyberspace, and instantaneous communication through it, remove some of the sense of geographic and temporal distance. The low cost of E-mail means that the mundane and trivial matters that used to be left behind now can follow one around the globe. Did I want to be reminded about that root canal appointment after having spent an afternoon exploring Kyoto?

Then there is what might be referred to as the “aesthetic” of traditional (or “snail”) mail. Electronic mail just doesn’t lend itself to certain sentiments. The kinesthetic of typing is not at all like putting pen to paper, and selecting “bold” and “italics” for “I love you” seems like the equivalent of sending plastic flowers. Adding an emoticon or typed smiley-face doesn’t help either.

E-mail is mail stripped to its essentials and. in the end, most of us dump it or leave it buried somewhere on our hard-drive. It’s mail that hasn’t had the experience of actual travel; it hasn’t been canceled, and shipped, fondled, mangled, and carried around in a pocket for days, or used as a bookmark. Email may have content; but it lacks substance. There’s no coffee spill on it from that cafe in Sienna, no stamp that says Marrakech, or Mandalay, no envelope from The Hotel Metropole, or a postcard picture of the place to which the words “wish you were here” actually refers.

I’ll probably continue to travel with my laptop and modem, but I won’t be leaving my pen at home either. I rather like the idea that somebody in the year 2073 might discover one of my postcards in a street stall in some foreign city and wonder, as I do about Dr, Chan, what dimension of time and space its author might be traveling through.***

When I was living in London in 1979 mail deliveries were twice a day in central London. Literally, “the postman always rang twice.” If I needed to make an international call I had to go to the post office and the operator there would take the number and I would sit until she directed me to one of the phone booths inside the post office and she would connect the call. One spoke very fast in those days; the calls were expensive. People in post offices n Europe in those days also did banking, paid their bills, and conducted local governmental transactions like paying fees and licenses. These days, every function from long distance phone calls to paying licenses, and more, can be conducted from an electronic device the size of a playing card. A message can be spoken into text and images attached rather than being described.

Such are the marvels of an age in which there are no longer phones booths, fewer mailboxes, and in which the gift of a fountain pen is almost as anachronistic as a snuff box. Email, Facebook, Twiitter, Instagram and other social media “apps” have vastly expanded and inflated communication that was once confined to the handwritten missive. In the end, it is the content of communication that matters. But it is communication deprived of touch of paper, the anticipation of delivery, the connection with time and place and, in cursive or even print, the distinctiveness of a fine hand.

* I might also point out here that at the time it was typical that Applications for jobs in France we’re required to be submitted in and written form as many corporations employed pseudoscience graphoanalysts to evaluate the personalities of applicants by means of they’re handwriting. See, Clapp, Mon Cahier de Paris (2015).

** Coincidentally, I was living in Hong Kong at the time, on a sabbatical studying the “handover” of Hong Kong to the PRC on July 1, 1997—exactly 90 years to the day of the date of that postcard.

Ahhh now I know why you presented the “Palmer Award” ….and wanted everything typed double space.

Eventually, all is revealed. Well, almost all.