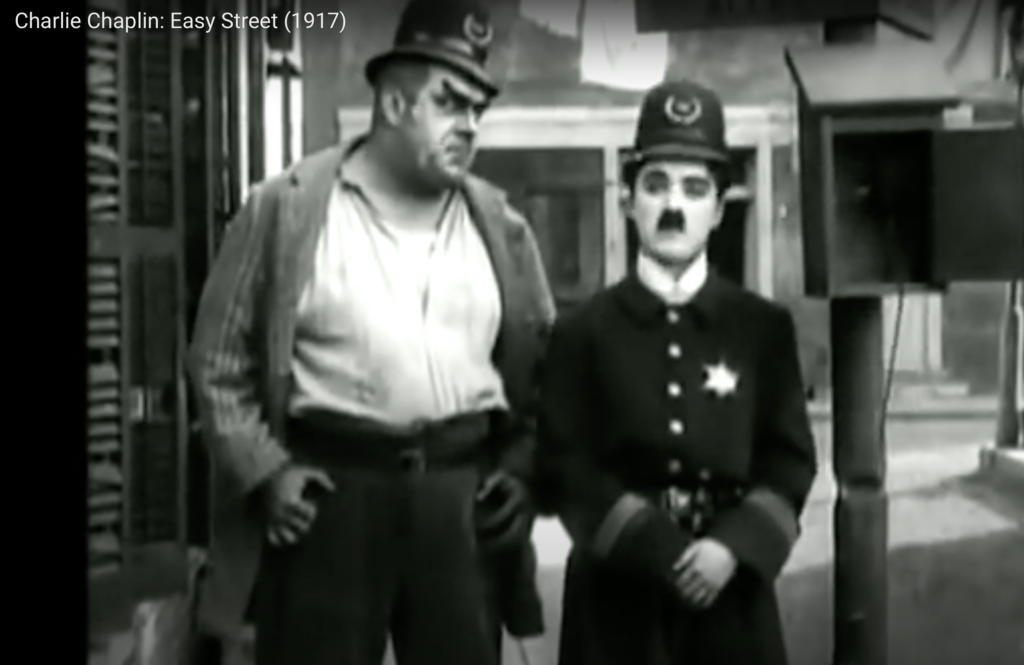 In obvious deference to the widespread civil disturbances in America’s cities ignited this time by the heinous murder of African-American George Floyd by members of the Minneapolis Police Force, the long-running propagandistic television show Cops was finally canceled. But drama is essentially about conflict and cops figure deep into the history of American media. One of the first examples to which I was exposed what’s from an 8mm print my father had of a 1917 Mutual short film by Charlie Chaplin called Easy Street.

Americans were just becoming accustomed to viewing aspects of their culture portrayed on Silver screens, and nobody was more masterful at exploring the themes that were central to that culture then Charlie Chaplin. In Easy Street he brings together to putatively countervailing elements of that culture– –violence and religion– –that are more complementary than conflicting.  The 24-minute silent film, which can be viewed in its entirety here, pulls no punches in making the points that the origins of America’s municipal police forces might have been to “protect and serve” but that their protection was in service of the person and property of the better-off classes and the orderliness of city streets.  The police serve the establishment, just as they do today, and the primary threat to that establishment remains, as it was then immigrants and minorities.

The cops of Easy Street are anything but the militarized-robocops of contemporary America. In Chaplin’s view, they are no match for the unruly, scrapping immigrant denizens of the early American slum.  They’re beaten and humiliated by violent mobs who were still wearing their beards and European attire, Andrew contest one another over scraps, with the spoils going to the meanest and the biggest. [these are essentially the same types of semi-barbaric characters Chaplin’s little tramp character had to outwit in another comic mutual he made around the same time, The Immigrant.

Chaplin comes into the scenario as an illiterate little tramp who first tries to rip off the collection box from a crude rescue mission, and then finds himself signing up as a policeman who is assigned to a beat on Easy Street, a neighborhood with a menagerie of the desperate and uncivilized controlled by the shifting hegemony of cops and bullies. The police seemed just as inadequate to maintain social order in those days.  Chaplin’s scenario includes theft, spousal abuse, family dysfunction, street riots, and drug abuse.  There is a mutual disrespect between the police and those they are supposed to protect and serve.

Become Gallons are mostly derived from policemen Chaplin’s and Encounter with the ruling neighborhood bully, who is first placed under arrest with the assistance of streetlight gas and eventually subdued by the application of a heavy cast iron stove, which is the most lethal police weapon of the moment. With the worst bully of the community sufficiently chastised entrance formed into a law-abiding citizen—and the neighborhood den of drink, drugs, and iniquity transformed into a proper place of worship, all is easy on Easy Street. Chaplin gets the girl, and those disorderly foreigners are hammered into obedient, churchgoing Americans.

A former denizen of the slums of East London, Chaplin is, of course sticking his finger right in the eye of the establishment in America even as he has them laughing. JA Groover Hoover hated his guts and did everything he could to run them out of the country for making Americans laugh at themselves. But the core of Chaplin’s success was that he understood what was going on, and he knew how to use his comic genius to pretend that he was either going along with it, or satirizing it, or both. Many comedians have said that at the core of genuine humor is the truth. The truth of Easy Street is that American law enforcement, and probably law-enforcement everywhere, and beginning with Rome’s praetorian guard, through the Ottoman sultan’s Janissaries, to today’s militarized urban robocops owe their allegiances to established power. Anyone challenging them knows there will be no easy streets.