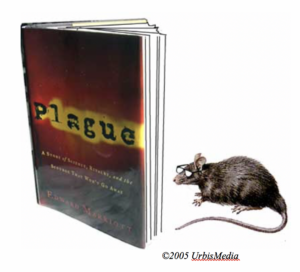 The novel coronavirus has provided me with the time and recommended social isolation to return to a subject that has interested me from my boyhood days. Call me wacky, weird, or wonderful, but I have always been interested in the plague. I was a young boy when I read The Decameron, Defoe, and even chunks of Pepys’ diaries of London in 1666, to feed my curiosity about the bubonic/pneumonic plague.  I think it might be that I was also intrigued with rats, which, as we know, carry fleas that kills them and can infect humans with bubonic plague.*

Plague or zoonosis caused by various bacilli and viruses may owe much to the proximity and relationships between people and animals.  The emergence of these bugs and pesky immune system butt-kickers just might be Nature’s way of admonishing us for overtaking too much of other species’ habitat and exploiting them as a food source. And when it comes to our suspicions about unidentified flying objects we may have more to fear from a sneeze of pneumonic droplets than an aerial insurgency of great critters fascinated with our genitalia. In the constant battle between our medical ingenuity and the souped-up Darwinian mutational gymnastics of microscopic monsters we received periodic reminders that we might not be the most adaptive life form, or not meek enough to qualify as inheritors of the Earth. If war is the appropriate metaphor, these microbes are the Taliban of our immune systems.

One of the many curious practices that struck me during the couple of years I spent in Hong Kong was that there were two different medical systems operating side by side.  Chinese medicine, with its “humors,” acupuncture, reflexology, and pharmacological recipes that can resemble garden sweepings and taste like compost, continues to service the medical needs mostly of the Chinese residents, with some brave gweilo patients who are regarded as a homeopathic alternative.  Second is Western medicine of the sort familiar to us, with modern hospitals, advanced diagnoses and treatments, is also to be found in facilities such as Queen Mary’s Hospital.

But modern medical practice in Hong Kong has one significant difference from that we would recognize.  Physicians not only write prescriptions, they also act as the pharmacies that dispense and sell drugs.  It is not too difficult to discern the potential for abuse in this arrangement.   Mrs. Wang’s illness might not really indicate an Rx for an expensive antibiotic, but the doctor is also in the business of selling drugs.

One particular abuse of this system is exactly that—the over-prescription of antibiotics in Hong Kong.  Antibiotics are commonly prescribed, for example, for common colds and sniffles, for which they are virtually useless because colds are viruses.  In fact, the practice is “bad medicine” because there is now a concern that Hong Kong residents may be all but immune to antibiotics and, should a bacterial infection get hold of their compromised immune systems, there might be no effective defense.

Add to this that Southern China has long been an incubator for new viruses.  Many poor farmers live with their livestock, the Chinese have a taste for exotic animals, and there are extremely high densities of population that exacerbate transmission.  Little wonder that we call the viruses generated there the “Asian Flu,” or “Hong Kong Flu.”  More recently, SARS was nearly one of its exports.

The current plague is viral, but revisiting the outbreak of bubonic plague, which gave the disease the discovery of its cause and the name of its discoverer, is worth a look back.

Edward Marriott’s Plague (2002) centers on a bubonic plague outbreak in Hong Kong in 1894.  Bubonic plague is a bacillus, so there was the prospect of hunting it down through microscopy and finding a cure or vaccine if its etiology could be discovered.  Amazingly, the rat flea was still not identified as the culprit at this late date.  Plague has been around since rats and has had many outbreaks and much has been written about them.  But what makes this account interesting is the rivalry between two epidemiological researchers, Alexandre Yersin, a reserved, humble Frenchman, and Kitasato Shibasaburo, a renowned and egotistical Japanese.

What was known was that plague was usually presaged by the appearance of dead rats.  Hong Kong was producing a lot of rodents in 1894, especially in a section of town called Tai Ping Shan, a squalid section of filthy, crowded tenements along a steep slope.  Soon after, when the rats were all dead and their fleas needed something else to bite, people started showing the characteristic “buboes,” high fevers, and then horrible deaths and the black tongues that gave the disease its name of “The Black Death” in the 14th century.  Bubonic can mutate into pneumonic plague, a communicable, and hence more virulent by-product.

In Marriott’s stirring account there are also the ubiquitous scourges of bigotry, politics, and racism at play in Hong Kong.  Kitasato was warmly welcomed by the British medical authorities (this was nearly fifty years before the Japanese invaded Hong Kong, and the Japanese were highly regarded).  Yersin, however, was French; enough said.  The British medical officer stonewalled him at every turn.  Yet Yersin was the only one who apparently had any real concern for the health of the Chinese (the British abused Chinese patients, at one point, sequestering them in a filthy derelict ship in the harbor).  He had done research in Burma, where he learned the language.

Nevertheless, it was Yersin, doing research almost entirely on his own (he even had to steal cadavers because the British would not release them to him) who isolated the bacillus.  Kitasato, with his large staff, access to cadavers, and a large laboratory in the west end of Hong Kong called Kennedy Town, claimed to have first discovered the bug, but it turned out he had jumped the gun so he could submit his findings to a medical journal and add to his renown (the journal later had to print a retraction).  Yersin developed a vaccine, but it did not prove very successful. Nevertheless, Yersin received the dubious honor of having one of the deadliest communicable diseases named after him.

Plague continues to be an interesting subject for me because—again, metaphorically, like war—it exposes the best and worst in the behavior of our species. Pathogenic microbes have been around since the beginning of life on earth and, as we have evolved, they have found ways of doing so right along with us. The place they have caused are referenced in the earliest literature, called down upon us by divine powers from those in the Old Testament to Homer in The Iliad, to scourge the Byzantine Christians, and probably wiping out remote populations that we never got to hear about. Like the bubonic plague, most of their victims never got to figure out what it was that was killing them and probably, there were religious and/or political leaders, like Donald Trump in his inclination to blame the Chinese, who have exploited plagues for political purposes. Indeed, biologists warn us today that the defrosting permafrost of the earth Mike released all sorts of new pathogens as “punishment” for cooking the planet.  One can only speculate on the possibilities of the global infections acting as a detonator causus belli in an international competition for diminished resources.**

Today there are still outbreaks of Yersinia pestis, even in the USA, but mostly in the Third World.  Contemporary antibiotics are capable of controlling the disease if one has not developed an immunity to effective prescriptions.

I have read other works on bubonic plague, notably Defoe (A Journal of the Plague Year), and Zinser (Rats, Lice and History), but this book came closer to home for me—at least the home I had in Hong Kong in 2000-2001.  It turns out that Tai Ping Shan Street (Big Peace Mountain Street) is still there, about four blocks from the apartment I rented.  In fact, I had often walked through it on my way to the nearby Man Mo Temple and the antique shops in the vicinity. In addition to not getting juiced up on antibiotics by Hong Kong doctors, I kept a sharp eye for any dead rats.

*They are also quite fascinating creatures that are more like us than you might care to admit.  See, https://aeon.co/essays/why-dont-rats-get-the-same-ethical-protections-as-primates.

**Beware, this date, Donald Trump has declared himself a “war president” against what he refers to as  “the Chinese virus,” despite the risk to his bone-spur.

Did you visit the wet markets while in China?

Several,in Beijing and Shanghai. In Hong Kong, I walked through one every day on my way to campus.