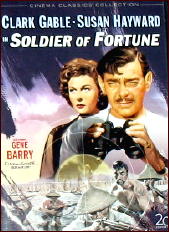 I loaded my CD of Soldier of Fortune again the other night. It certainly is not a movie of much renown, certainly on nobody’s “great films” list, not even mine for that matter. But it is one of those films that makes an existential connection with me, one that invites for me a deconstructive impulse.

I have written a fair amount about movies from the POV of both what social factors that influenced their production and what influence they have had on how we view society, and in my particular orbit of interest, cities and urban life. I refer here (shamelessly) to my 2013 book, The American City in the Cinema.

Soldier of Fortune occupies a special spot because it is a story set in Hong Kong, a town for which I have a particular affection, perhaps because my first novel was set there.[1] It is also a city that almost literally changes form overnight, such that any fiction motion picture that involves exterior location filming also becomes “documentary.” Soldier of Fortune involves shots of Hong Kong streets with buildings and atmospheres that no longer exist and a waterfront that disappeared years ago. As a city with precious little buildable space, new construction typically involves destruction. Hong Kong therefore has little concern with nostalgia, and urban preservationists have a hard task.

Soldier of Fortune falls into a limited post WWII genre I call “red scare” films. Like Blood Alley (1955, with John Wayne and Lauren Bacall), Love is a Many-Splendored Thing (1955, William Holden and Jennifer Jones), and The Bridges of Toko-Ri (1954, William Holden and Grace Kelly), it was released just five years after the Communist revolution of 1949 in the atmosphere of the House Un-American Activities Hearings anti-communist witch hunt of leftists in the motion picture industry.

Soldier stars an aging Clark Gable as American trader/mercenary Hank Lee, and Susan Hayward as Mrs. Jane Hoyt, whose photojournalist husband (Gene Barry) is imprisoned by the “commies” somewhere up the Pearl River. Not untypical of this genre the British, who rule the Crown colony, are subjected to mild ridicule (in this case for not being able to retrieve Hoyt). So dashing Hank Lee who resides in a mansion on the Peak and has a private junk-gunboat has to be called into the rather lame plot by getting him to fall for Mrs. Hoyt with the assistance of Hank’s adopted Chinese boy/cupid who lives with Lee, showing the soldier of fortune’s soft side. There is little doubt that romantic sparks will ignite a relationship between Hank and Mrs. Hoyt.

But production-wise it was to be a two-continent romance; owing to divorce proceedings she was in with husband Lex Barker Hayward was concerned she might lose child custody and never set foot in the Crown Colony and consequently played her scenes on sets and exteriors in Hollywood or was rear projection-screened or doubled into other scenes. So, for the film buff it is interesting to observe how this movie is edited together with scenes from the interior of Hong Kong’s famous Peninsula Hotel[2], where Hayward is doubled, or where her scenes with American-Chinese actor Richard Loo on a ferry are shot on a soundstage.

Gable played several of his scenes on both sides of the Pacific, for which we can give thanks for the views and B-roll of the genuine and long gone Hong Kong of early 1950s. These are the redeeming elements of a that story quickly loses plausibility with gratuitous Falstaffian interludes of bar fights in Kowloon, the easy rescue of Mr. Hoyt who with seeming gratitude turns his wife over to Mr. Lee. Hollywood was clearly not going to take down the Chinese communists with this sort of cinema.

But Soldier of Fortune did provide a form of redemption for the film’s director, Edward Dmytryk. By the late 1940s, Dmytryk was considered one of Hollywood’s new directing talents, but the House Un-American Activities Committee took a hand in his career. Dmytryk had been a Communist Party member briefly during World War II; he became was one of the so-called “Hollywood Ten” who refused to cooperate with HUAC and had their careers disrupted or ruined as a result. The committee threw him in prison for refusing to cooperate, and after having spent several months behind bars, Dmytryk decided to cooperate, and testified again before the Committee, this time giving the names of people he said were Communists. Perhaps it was a form penance that he took the anti-communist Soldier of Fortune assignment, although the movie comes off a rather soft in its portrayal of the new masters of the mainland.

Finally, in 2013, I made a sort of movie pilgrimage to the only remaining “location” of Soldier of Fortune, the mansion non the Peak that served as the home of Hank Lee in the film. Originally named “Hei Lo”, King Yin Lei was built by Mr. Shum Yat-chor and Mrs. Shum Li Po-lun in 1937. Mr. Shum Yat-chor was a notable merchant and philanthropist in Xinhui of Guangdong Province. The building was sold in 1978 to Mr. Yeo (Yow) Chei Man and his son Mr. Yow Mok-shing, who renamed the building as “King Yin Lei”. The building was resold to its previous owner in August 2007.[3] 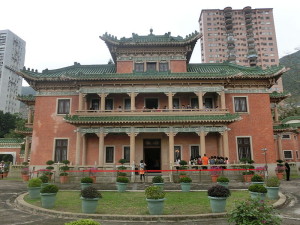 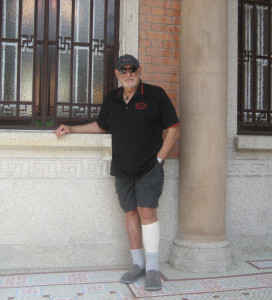 It is doubtful that any interiors of the mansion were used in the film, as these are scenes in which Hayward appears. At various times the mansion has been threatened with demolition, since its location and remarkable views of Victoria Harbour and Kowloon would make for a profitable ream estate development. For the present it appears to remain under the protection of preservationist authorities and, as long there are CDs of Soldier of Fortune, it will have a place in Hong Kong’s cinematic history as well.

[1] For Goodness Sake: A Novel of the Afterlife of Suzie Wong (BambooBooks, 2008).  See also my screenplay of this story.

[2] It was reported that Gable stayed at the renowned hotel, but upset staff by throwing parties and even cooking hotdogs in his room.

[3] The building has been a popular spot for taking photographs by visitors. As the Peak area was a traditional residence of foreigners, the location of King Yin Lei symbolizes the rise of the Chinese merchant class. It also represents an earlier phase of Hong Kong history when the upper-class residential area took shape in the Mid-levels.

Interesting story… also interesting in regard to the challenges for urban preservationists in the ever-evolving HK landscape. Thanks Jim.

Thanks, Matt. A master photographer would appreciate what goes into “getting the shot.”

Thanks, Matt. A master photographer would appreciate what goes into “getting the shot.”