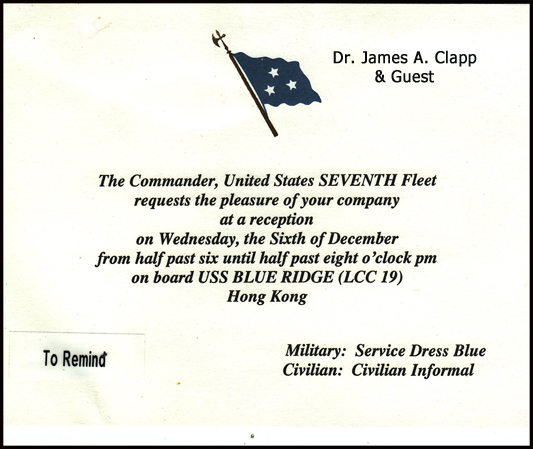 Back in Fall of 2000, when I was a Fulbrighter teaching at Lingnan University in the New Territories of Hong Kong I used to take the fifty-minute bus ride from Tuen Mun into Hong Kong almost every weekend. But one day, for variety, I decided to take the ferry that goes through the western reaches of Victoria Harbour into Central Hong Kong. It was a foggy morning and the visibility was very low, so when we were passing by the flank of a huge aircraft carrier I am first mistook it for an island until I discerning the large number 74 looming above.

Later, when got my computer a search turned up that it was the US air craft carrier CV 74, the John C. Stennis. Right there, in Hong Kong Harbour, was the military might of America, and symbol of American racism. What must it me like, I wondered, for an African-American sailor to serve in a ship named after the notorious segregationist Senator John C. Stennis of Mississippi?

In December I received a communication from the American Consulate in Hong Kong that included an invitation to a reception aboard the USS Blue Ridge, the command ship of the U.S. Seventh Fleet. It reminded me that, as a Fulbright Scholar, I was a representative of my country in China. I was expected to attend.

I did. But I will return to that. Fast forward to 2015 and I am back n San Diego reading in Foreign Policy (Nov/Dec 2015) a article by James Bamford which he begins: “ in May, the US defense department invited a CNN team onto the Navy’s newest, most fistic aided spy plane, the P-8A Poseidon. After taking off from Clark airbase in the Philippines, pilots flew the aircraft near three islands in the South China Sea, where Chinese reclamation and military building projects are taking place. The operation, however, wasn’t just intended to collect intelligence. It appears it was also meant to provoke a hostile reaction from China and, thanks to the news cameras on board, Use that response for propaganda—to blatantly tell the world that America thinks China’s territorial claims are illegal and dangerous. The Chinese sent eight strong warnings to the plane. “This is the Chinese navy,” said one radio operator. “Please go away…to avoid misunderstanding.”

Maybe a nice “misunderstanding” is just what the US military is looking for. After all, they are pretty good at it, going all the way back that fake incident with the sinking of its own cruiser the USS Maine in 1898 as a pretext for starting the Spanish-American war. The U.S. Navy is quite good at such fakes and returned to the ruse with the Tonkin Incident in 1964 with the supposed North Vietnamese attack on the U.S. destroyer Maddox, to crank the excuse for ten years of illegal, useless war before finding a mode of “honorable” surrender. Of course, when you can’t pull off the old “shiperooski” there’s always ginning up the “weapons of mass destruction” deception to get a war started. America, it’s the nation-state equivalent of that drunk asshole you once encountered at some bar who takes bumping his elbow as an excuse to throw a sucker-punch.

One can only imagine what a causus belli would be invoked if the Chinese parked one of their warships in New York harbor, or flew one of their spy planes over Hawaii, Guam, Diego Garcia, or for that matter any of the hundreds of naval and other military bases that America has scattered all over the world, many of them threateningly close to China. Remember how close we got to nuclear war with the USSR back in the Cuban Missile Crisis? We couldn’t even admit that we had to trade off some of those missiles we had in Turkey that were staring at the commies. But that’s us, we’re special, exceptional, the self-anointed guardians of the good, true and beautiful in the world that has evolved into the planet’s playground bully. We are entitled top go anywhere with our ships and spy planes to prevent China from its “enormous land grab” as the toady CNN reporter aboard dutifully reported, adding that “It’s hard to see how this tension doesn’t escalate going forward.”

The U.S. and China have been in a pushing and shoving contest in these Yellow Sea and South China Sea for a several years now. There as that American EP-3 spy plane that collided with a Chinese military jet near Hainan in 2001. The Chinese pilot died, but it probably averted a war that the EP-3 managed to land at Hainan and its twenty-four crew were released. This is now standard U.S. provocative procedure: stick your nose in where it doesn’t belong with your ships and planes, and put “advisors” with the side you support in some civil war in a conflict zone S.E. Asia or Central America until you take some casualties and, bingo, you got yourself a nice little war to keep those Pentagon and DOD budgets nice and fat. War is good business.

Back in 2001 I and my date were picked up and Hong Kong’s Fenwick Pier by a Navy launch and ferried out the Blue Ridge anchored in the Western harbour.* We climbed aboard and made our way up several staircases—each with a smiling, saluting young sailor at the landings—to the main deck where a quite good orchestra was already playing and an open bar and sumptuous buffet were available, all being served by our young men and women in uniform. A variety of well-dressed Westerners and Chinese civilians mingled with the upper military brass in some sort of diplomatic circle jerk whose meaning ad utility escaped me. It was my tax dollars at work, this time making small talk, not war. Unless, of course, we were to be mysteriously sunk as a pretext for a war with the People’s Republic of China.