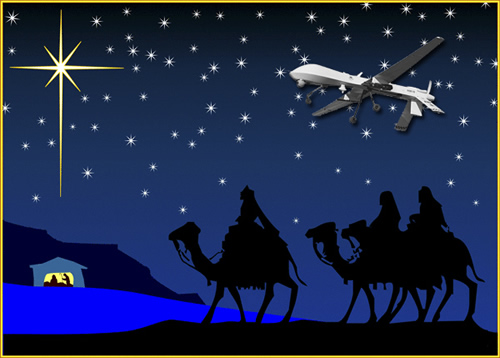 There has been a lot of chatter the past few years about a “war on Christmas.” Most of us secular humanists have been blamed for it and have regarded this pseudo war as just another fiction by the usual suspects: Jesus freaks, political opportunists, Fox News nutjobs and the always reliable Rev. Pat Robinson. But, in fact, evidence has recently come to light in the form of a leaked video record of some recent CIA Predator drone activity in the vicinity of the Holy Land. DCJ has obtained a transcript of that and is making available to its readers. Warning: contains strong language, sexual situations, and animal destruction.

PLACE: Room behind a door marked XD/25 in the basement of an old casino on the outskirts of Las Vegas. Two men sit at banks of large computer monitors. Litre bottles of Mountain Dew and cans of Monster, bags of Doritos litter desks illuminated only by the screens and there is a strong whiff of cannabis in the atmosphere. The screens show high-altitude drone camera night views of a Middle Eastern landscape.

ScroogeTape1: “Where, Droney? I can’t make out shit thanks to the glare of that freakin’ Star of Bethlehem or whatever.”

BeezleBub753: Now pull back a little to the northeast. See that little road by that orchard?

ScroogeTape1: “Bingo, I’m on ’em. Three of ‘em. Yo, think those are the three wise motherfuckers Intel put us onto?

ScroogeTape1: “What’s the ROE [rules of engagement] on those guys.”

BeezleBub753: “They’re supposed to be moving coke, frankenpot and meth to AQ [Al Qaeda] outposts. And we’re supposed to check for camels . . . and I got camels. Whaddaya think I should use?”

ScroogeTape1: “I’d go with a ‘Humper9’; it locks onto camel methane emissions [flatulence of the ‘ship of the desert’].

BeezleBub753: “Think we should give ‘em a real climax?”

ScroogeTape1: “Nah, we better save our stash; might need it for the main target. You loiter here and I’m gonna mosey over toward town. Toss me a bag of Doritos.”

[There is about a 12 minute interlude as the drone cameras search the green-hued landscape below.]

ScroogeTape1: Hey, think I got our target. Just like the Intel said: old guy leading a donkey with a woman on it. Just heading into town.” [The camera pulls in and we can see Mary and Joseph heading down an alley and into a barn.] “This is gonna be a tough one; some collateral with some sheep and cows and the donkey.”

ScroogeTape1: “A ‘HerodX3’; specially designed for de-messiah missions. Looks like it’s time—lock and load. Here we go.” We see the flash of the missile as it leaves the drone and then follow its camera as it closes on the target. Then a snowy screen. The switch to the drone camera shows a good part of the neighborhood leveled and smoldering.

BeezleBub753: “Halleluiah! So long one Messiah and a bunch of shopping days before Christmas.

ScroogeTape1: “Nah, they’ll just find some other kid and start all over.”

BeezleBub753: “Think so? Well at least its job security for us. This War on Christmas thing might be better than the War on Terror . . . “

BeezleBub753: “You’re on. Some Lesbian Assassins 4?

ScroogeTape1: “My Pred was just taken out by some freakin’ red missile or somthin’. Like a bunch of brown things with horns on the front, man. Last thing I saw was a red light in the nose comin’ at me.”

BeezleBub753: “WTF, dude! Look at my screen! Here it comes again! Oh, shit, man! That red light is coming straight at my Pred now! Christ, is that some fat guy riding that thing! What the hell is this, Dr. Strangelove? . . . Ka-fucking-boom! There goes my Pred, too.

[At this point the video of both screens go black]