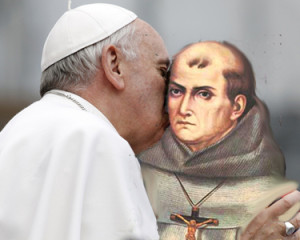 Like a rock (of ages) star, Pope Francis landed Washington today to rave previews. No question, this pope has charisma to spare after the last two duds, and Holy Mother Church is actually holding out some hope that Francis might be able to attract some of the faithful back from their exile of embarrassment and disgust brought upon it by its pederast priests. (Good luck with that.)

No question, Francis is a rather likable guy, a man of the people who plunges into crowds, kisses babies like a politician, seems to care for more about the poor than big donors, has hopeful things to say about gays and women who have had abortions and even Catholics who have divorced. And, with the opinions he has expressed about capitalism and about climate change, He is the first pope since the equally revered John XXIII, who appears to have what the Church called back in John’s day an apertura a sinestra.

Even for auto excommunicated Catholics like myself, Francis has been a rather pleasant surprise (although from the beginning I wasn’t ready to swallow the whole Eucharistic wafer). No way that I’m coming back into the fold, but at least he has made things a little more interesting. One part of that interest is in observing Vaticanazzi trying to explain the phenomenon of his pope. Of particular interest to me is that a candidate explanation is that he is the first pope since the 17th century to come from one of the religious orders, and in this case he is the first “Jesuit pope.”

To non-Catholics, and many Catholics as well, that explanation might not explain much. But to a graduate of Jesuit schools, and someone who has had occasion to delve into the history of the Society of Jesus, it explains a lot. Here I am going to borrow from myself, more specifically from my (shameless promotion alert) recent novel, Stumbling Blocks and Stepping Stones* about Jesuits.

The Jesuits are [the Church’s] black-robed “godslingers”—not cloistered monks trying to pray a better world into being, or parish priests readying for bingo night—but worldly men of action who follow St. Francis Xavier’s motto Ignem Mittere in Terram, willing to commit metaphysical arson, to “set the world on fire” in service of Loyola’s loftier anthem, Ad Majorem Dei Gloriam.

The “Jebbies” always had balls (though not necessarily after meeting up with Mohawks and Hurons in the 17th C). They were the sort who would point to that part of the bleachers where they were going to hit a home run. They had not been daunted by Hindus in Goa, Buddhists in Canton, or animists in Quebec, or even some really weird aboriginals in the Amazon, like the Tupi-Guarani (loose trans., “mean motherfuckers”). If you want a prayer-chain, then supplicate a nun or a monk; if you want to extend the roads that lead to Rome, dispatch the Jesuits. Men like Jogues, Goupil and Brébeuf, who would saunter into Huron country in winter and feel fortunate if they came back with most of their appendages and maybe a few “soul scalps” hanging from the belts of their raggedy soutaines. Men like Manuel de Norbrega, or Antonio Ruiz de Montoya, who would brave venomous snakes and poison-tipped arrows in South American rain forests, foraging for souls and fomenting rebellion against even Catholic overlords. These were guys like Matteo Ricci, cleverly ingratiating himself to the Emperor of China with western philosophy and technology. These were guys like Francis Xavier who founded a Church that had the balls to threaten the sovereignty of the Japanese Shogun and get twenty-six Jebbies and converts crucified on a hill in Nagasaki.

Not all Jesuits dallied with martyrdom. Some were confessors, counselors and confidants of royalty and the politically powerful. They would have laughed at the notion of the separation of church and state. From the confessional they influenced finance and policy and conflated the “greater glory of God” with the greater gilding of their clients.

Small wonder that there were, and still are, those who despised and feared these black-attired legionnaires of the Church. Interestingly, although there have always been Protestants who saw the Jesuits as enemies, it was often their co-religionists, fellow Catholics, who regarded Jesuits with extreme suspicion and opprobrium. The Society of Jesus was fierce and effective competition for the other legions of the church, Dominicans, Benedictines, Franciscans, Piarists, and other orders. Jesuits not only formed attachments with secular authority, but also seemed to have special access to the corridors of the Vatican.

The Society of Jesus also competed with other religious orders (as well as the Protestants) through their missions, as they did with the Spanish orders in New Spain and the Franciscans in the Orient. Although they were often the first to venture into new territory in search of souls and commercial opportunities, they were sometimes beat out by other orders. For example, the Franciscans were in Western China well before the Jesuits. They were in Mongolia in the early 14th C, but apparently their connections there ended in 1368. That figures; the Franciscans were the Church’s “Mild Bunch.” Their founder, St. Francis is often represented being kind to animals. When they got to China, where the people eat any beast they can chop up and throw in a wok, the Franciscans probably left, gagging. It was the Jesuits, arriving with Matteo Ricci, who made the most effective inroads into China. These factors were certainly responsible for envy from the other religious orders, but perhaps the primary basis for this envy was the Jesuit educational system.

“Give us a boy until age seven and we well show you the man.” So confident in bending the will of young men to theirs; so goes the Jesuit boast. There is more than a grain of truth to it. It is sometimes surprisingly easy for one “Jesuit product” to spot another, even if they are from different times and places. By the time Jesuits decided to open a high school in my town there were already Jesuit high schools, colleges and seminaries all over the world. There must be hundreds of schools named after Xavier and Loyola, and not just in the West, but in places like Nagasaki, Macao, Bombay, and on numerous Southern Pacific islands. I don’t know whether their effect is always the same on the young men who study with the Jesuits, but they do seem to imbue their charges, at whatever ages they get them, with a sense of ambition, purpose and service.

The Jesuits are men of action, not contemplation; they get things done, sometimes setting them “on fire.” This is no doubt why they have made enemies over the centuries, even at times angering the Church that they serve. They have been prohibited, expelled, and executed, but they have prevailed, and their influence carries forward in the men (and women) they have taught. They are not shy about telling you that and, if you want to be part of their process, you have to subscribe to their rules.

So just how much Jesuit, and how much “Franciscan,” is this Pope Francis? How clever at manipulating public relations and political power is he, and how much is he a member of the “mild bunch”? Or is he both? One must be gratified that he is taking on poverty, immigration, capitalism, and climate change; but he hasn’t dumped those bishops that protected predatory priests, and much of the old Church doctrine remains in place. And now one has to wonder if he has completely forgotten his Jesuit roots. On his visit to the good ole US of A, his bad ole Roman Catholic Church will canonize the Spanish Franciscan, Fr. Junipero Serra, who worked for the Inquisition and founded several California missions in the mid-18th C that were basically slave colonies. Is he bent on “setting fire to the earth”, or just his credibility?

No way, Francis, I ain’t coming back.

*What, you haven’t purchased your copy yet?

Vol.96.7: CRAPITALISM: ON THE PRIVATIZATION OF EVERYTHING