Vol.96.7: CRAPITALISM: ON THE PRIVATIZATION OF EVERYTHING 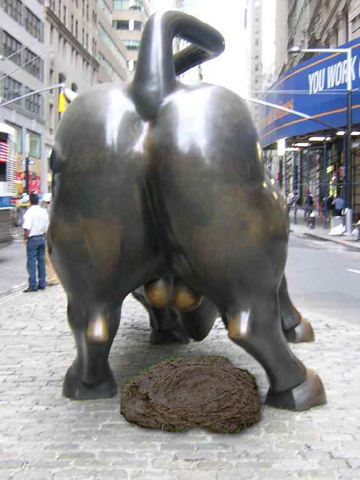 No wonder there has been such a furor over the ACA—it perhaps presages a full single-payer government health care system—one lucrative area that the private sector would love to control for profit. The ACA is far from ideal, more of a “deal” that Obama made with the insurance companies that have long enjoyed their insurgency into American healthcare, skimming their profits and denying service to bloat their share price. Under ACA they are still doing just fine, thank you, even of they can no longer sentence you with a “pre-existing condition.” But a truly public health care system, like a government single-payer system of the sort that exists in many other countries, would deprive capitalists of the enormous profitability of sickness, pain, and suffering.

But I’m getting ahead of my theme: Capitalism. It’s a term that is piously intoned by Republican presidential wannabes with the same reverence as Christianity, with which, for those in love with the gospel of prosperity, it is often conflated. Never mind that Jesus sounded a lot more lie Karl Marx than Adam Smith. Fundamentally, capitalism is about owning stuff, especially the means of production. The classical four factors of production are: land, labor, capital, and entrepreneurship. In the typical situation, land (that is, factories and raw materials as well as machinery), capital (finance), and entrepreneurship (patents and ideas), have been owned by capitalists and their stockholders. This is not to say that they have not also in various times and places, owned labor as well. Recall, that slavery is condoned in the Old Testament, and was the basis for the entire economy of the southern United States. This is not to say that “wage slavery” is still not widespread; corporations and politicians continue to destroy unions and a workers rights, fight increases in minimum wages and overtime pay and sick leave, while increasing management compensation, bonuses, and stock and severance packages.

In the interests of being “fair and balanced,” we will put in for the record here that socialism is of course the ownership of the means of production by the state, rather than by private enterprise, a state of affairs that is not without its own set of difficulties, and which is itself not immune to the possibilities for labor enslavement.

But capitalism is also about something else, markets. Capitalism needs something to feed upon and, while we know that it produces consumer goods like cars, refrigerators, computers, and toasters, these are not the only things from which some profits and increases in stock shares can be squeezed. Indeed looking for new markets beyond traditional consumer goods, many of which are now being produced offshore (having been moved there in order to glean higher profits from lower labor costs) is now a major search for the capitalists who want to “have it all.”

So the capitalists, and their minions in the GOP and useful idiots like Libetarians, have taken aim, like a snake eying a mouse, on the public sector. Yup, that’s right, government, or at least governmental functions. The first thing to do is to tear down public confidence in what is public (read “regulations ” and “taxes”), which has become a bad word since it was vilified by St. Ronnie. An entire political party has been ideologically given over to the enterprise of trash-talking government (while running for its well-paid governmental offices, of course) and to transferring governmental functions and responsibilities to their friends on Wall Street.

Crime Pays. Thanks again to St. Ronnie the number of people convicted of drug offenses has gone up and the federal prison population has increased — almost 790 percent since 1980, when there were only about 25,000 inmates. Today, there are more than 215,000. The so-called “war on drugs” (a nice enterprise in it’s own right) could also be called the “war on (mostly minority) drug users to fill up prisons” with the resulting overcrowding that “justifies” the construction of privately-run prisons-for-profit. Now America has the dubious honor of having more people in prison than any other nation.   If we are such a “great nation,” as we are continuously told by those bent on its ruin, why do we have so many people in prison? Because it’s such good business.

Like War. Despite the fact that the United States has a defense budget that is larger then the next sixteen defense budgets of other countries in total, we are constantly told by our war mongers that United States is at a defensive disadvantage. With a superiority in every aspect of defense save for a standing army, the maintenance of nearly 800 military bases throughout the world, in addition to fleets of aircraft carriers and nuclear submarines, as well as being the world’s largest arms dealer, war is America’s biggest business. In fact, it only gets bigger. George Bush’s wars in Iraq and Afghanistan, employed large numbers of private corporations and contractors, like KBR, a subsidiary of Halliburton, in which his vice president, Dick Cheney, owns a substantial interest, proved to be an enormously profitable enterprise financed by the American taxpayer “off the books” with Chinese financing. Nothing was more ironic than the American military destroying the oil-producing infrastructure of Iraq and then contracting with its own American corporations to rebuild it. As part of that process American arms manufacturers and defense contractors and mercenaries probably enjoyed the largest transfer of wealth from the bottom to the top 1% in the nation’s history. War is supposed to be the responsibility of Congress, but don’t kid yourself, it is the responsibility of the lobbyists of the defense contractors and war profiteers. It is no longer a public function, but a business opportunity. “Some powerful people make their living with the production of arms. It’s the industry of death”. (Pope Francis)

And Tests. Perhaps the most insidious and potentially most socially damaging corporate-capitalist insurgency into the public realm has been the systematic attack upon public education. Overall, education is our highest public expenditure. So there is a lot of money to be made from education if it can be turned from Public expenditure to private profit. Which is exactly what the public the private sector has been doing, first by denigrating public schools as “failures,” and then offering charter schools as the alternative. Of course, there needs to be a gimmick by which one can lend some notion of veracity to this assertion, and this is where testing comes into play. Testing results, for anyone who has been in education is one of the most easily rigged outcomes.   Even the Obama administration and Secretary of Education Arne Duncan, have fallen for this canard with the ridiculous Association of test scores with actual learning under their program “a race to the top. The result has been a siphoning off of public funds from public schools to private profit charter schools, a strategy that further weakens public schools, still responsible for students with learning disabilities and other issues, In order to render the “failure, close quotes of public education as a self-fulfilling prophecy. At the post secondary level has been the establishment of a vast number of private profit so called “universities” that feed off of government loans for students who end up with little prospect (and a lot of debt) for “degrees” that are little more than vocational training. We, the taxpayers, and up paying for the profit these diploma mills make and which they pour into further advertising and student recruitment.

The idea that government is an evil thing out to tax away all your hard earned wealth and to transfer it to immigrants and layabouts predates the gospel of Saint Ronnie, but the “great communicator” of falsehoods, fables and other ideological bullshit, gave it its biggest boost. The idea has evolved from eliminating the government to private enterprise becoming the government. Soon enough everything will be for sale, and the market will determine its price. But don’t call it socialism . . . fascism maybe?

The market is always providing us with its wondrous blessings, whether its bundled cable, oligopolistic airlines, banks that create housing bubbles and destroy jobs and media corporations that have become whores for politics. And, let’s not leave out, in the same week that Pope Francis said to the U.S. congress: “I would encourage you to keep in mind all those people around us who are trapped in a cycle of poverty. They too need to be given hope [,]” one of our pharmaceutical companies, Turing Pharmaceuticals, a start-up run by a former hedge fund manager, acquired a drug called Daraprim, that is the standard of care for treating a life-threatening parasitic infection and immediately raised the price to $750 a tablet from $13.50, bringing the annual cost of treatment for some patients to hundreds of thousands of dollars.

Soon crapitalists might own everything. Then the only thing to worry about is, what will we do without a government to bail out crapitalism when it chokes on its own greed.

See also: 92.4 the case for government