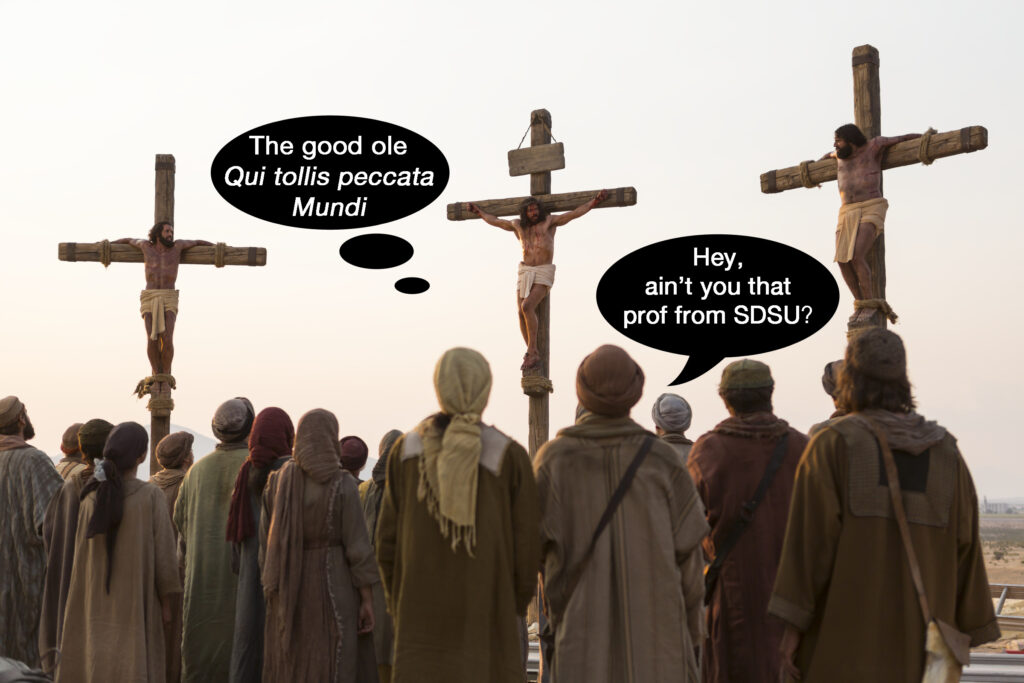 Recently, I read a sample from a new book titled I Wish I’d Been There, by Byron Hollingshead, that is a composite volume of essays by “twenty historians bring to life dramatic events that changed America.” I suspect that it is natural for historians to wish they could actually witness the historical events that most interest them.

I used to give the same assignment, in a slightly different manner, to my graduate students in my seminar in Urban Theory. I wanted to get their impressions at the beginning of the course so they could compare them with how they thought and felt at the end of the course. They were simple questions, like “A city is like a ________?” And, “Cities originate because ___________?; Cities die because ________?”

I confess that I was always most curious about these last two questions. Some students chose the future, sometimes way off in some Star Trek time and place. But more chose the past, sometimes a recent past like the rock concert at Woodstock, or the assassination of Dr. King. Sometimes a significant historical event like the landing at D-Day, for this signing of the Declaration of Independence. Strangely, I don’t remember any of them ever choosing to be with Armstrong and Aldrin at the moon landing, which would’ve been a choice of mine.

I would go around the class asking them the reasons for their choices, and then I would say that it was interesting to me that over the years of doing this questionnaire there had never been a student who chose the same time and place in the past as I would have chosen.

Obviously, they wanted to know my choice. And I would answer that I would be most curious to be on the hill outside Jerusalem, at a nonspecific date that was allegedly a Friday sometime in the year that was supposedly 33 A.D. It was not necessary of course for me to specifically add more detail, except that I was saying that my reason for this choice was that I could not think of a more significant date and event in the history of Western civilization from which nearly everything was subsequently changed. Moreover, from a factual basis, it was perhaps the greatest mystery in the history of Western civilization as to precisely what happened–if it happened at all. But I was ready to be there.

I have seen that day re-created from the imaginations (and I can include the imaginations of the authors of the Gospels, men who were also not present at that historical location and occasion) of novelists, painters, and filmmakers. Its prime element—a crucified man on a cross of wood—is one of the most ubiquitous religious symbols in the world. But no one there seems to have written an eyewitness account, or an account of the events––if my choice would allow me to stay the weekend––two mornings later at a tomb somewhere in Jerusalem.

I confess that I have probably thought more about that long-ago weekend in Jerusalem then should merit my attention. But no weekend in my life, not even that one that I spent in a hotel room in Corfu with . . . well, never mind, has made such an impression upon me.  It has been referred two in print in film as “the greatest story ever told,” yet it has not been told by anyone who might’ve been on that hill on that Friday afternoon back when–– allegedly––a rebellious Jewish rabbi was crucified.

Christianity is a religion encourages its adherents to be good, like Christ himself. It also tells us that God the father had his son died upon the cross to redeem the sins of those who believe in him.  So, if we are good, and do not commit sins, Jesus died on the cross for nothing. Ironically, to have a truly “saved” Christian religious experience one needs to do some bad things. One can logically see, this is a freakin’ paradoxical religion.*

Anyway, it didn’t take long for the Christians to become corrupted and do more than a fair amount of sinning. In a relatively short period of time, they came to understand that becoming the official faith of a strong secular power conferred immense benefits wealth, authority and privilege and license to enforce their retention. And in a relatively short period of time, it was not Christians who were hanging on crosses but those who Christians considered heretics and nonbelievers were also tortured and burned at the stake for their unwillingness to conform. Christianity enforced its position with crusades, inquisitions, outright theft, and dogma of metaphysical terror—pretty much the same shit it prefers to use today. Holy Mother Church, as the Roman Catholic Church referred to itself quickly became an institution whose behavior was exactly the opposite of the virtues Christ professed to represent. The guy hanging up on the cross––the son of God who should have been all-knowing, because he too was God––presumably was providing a plenary indulgence for all of these future sins.  What a marvelous religious institution, one could have the power of the wealth and the ability to arrogate them to itself to the practice of war and murder, with the comforting knowledge that such behaviors were forgivable because they secured an advanced the interests of Holy Mother Church. According to his deified status, Jesus should have understood this paradox constituted putatively unconditional redemption.

But apparently, he did not. If I had gotten to Jerusalem the night before and managed to locate the son of God in the garden of Gethsemane, I likely would have overheard his crisis of doubt about what was going to happen to him the next day. Jesus may have been aware of that, but he seemed unconvinced that it was necessary to achieve this purpose in such a sanguinary manner. Why? It seems he was asking his old man, this is a ridiculous process by which I get the shit kicked out of me and hung up on across so that the sins of the world can be forgiven? What the fuck is it with that? And who can blame him and for asking? Lama sabachthani.Yeah, I would like to of been there; I parlay-vous a little Aramaic.

But for those of you who can’t get there, one can always try to get a feel for what really happened that long-ago day by loading up a DVD of Mel Gibson’s The Passion of the Christ. I prefer to watch it at home rather than in a theater full of born-again Christians. Although it always requires wiping the blood off my television (gives plasma TV another layer of meaning).

As I was reading the reminder that it was only for home viewing I was reminded of a story of when Oscar Wilde was taking his exams at Oxford (or was it Cambridge?). In any case, it was an oral exam, in Greek, and the passage he was given to translate into (or was it from?) the language that gave Christ his name, was the “passion of Christ.” (Not the Christ, as Mr. Gibson likes to stress the Messianic.) The story goes that Wilde was so proficient at Greek that the committee said they heard enough before he finished the part about the garden of Gethsemane.  But Wilde asked if he could continue translating for a while longer. The committee consented to this, but stopped him again, somewhere around the scourging of Christ, and told him that it was more than sufficient to pass. He asked again if he could continue, but was told he could not. At which Wilde said in a disappointed tone: “I did so want to know how things turned out.” Cheeky, Irish bugger.

Gibson is clearly terrified that if we aren’t convinced that Jesus suffered the worst death of any human being before or since we will not believe that he was supposed to be dying for our sins. So we get a movie that would better have been titled Beating the Bejeezus Out of Jesus, a self-defeating project of gallons of theatre blood and gore that goes on, and on, and on, for two hours, until we realize that we are being punished for Mel’s sins. Worse still, it is hackneyed and hokey filmmaking. Everybody, of course, looks like what they are supposed to look like, a tall and handsome Christ, sneering Pharisees, Roman soldiers who could double as Soprano thugs, Mary and Mary Magdalene are decked out as nuns, and then there is the Devil (how did he get in this thing?), who looks like Boy George with his shaved eyebrows. The dialogue is in Aramaic (or was it Urdu? Who can tell?) and Latin, of which I caught a couple of words and phrases because it was pronounced like, well, Aramaic. In any case, it’s a blessing, since having to read the subtitles does divert the eye from the carnage.

Since we know Jerusalem as a rather crumbly ancient city Gibson apparently figured it looked that way in Christ’s time as well. A little anachronism is acceptable, I guess, as artistic license. But when the high priests tossed Judas a purse of thirty pieces of silver, did the purse actually float through the air in slow motion? Subtlety is not Mel forte, and he really likes to overcrank that camera; we get Christ being flailed in slo-mo, falling a good half dozen times in slo-mo (dust and pieces of flesh flying about in slo-mo), the pounding of nails in slo-mo, sometimes we get some subjective camera, some ground-level angles, some overheads, bust mostly slo-mo, lots of slo-mo. We actually end up wishing for the ending we all know is coming (but when we are stuck in slo-mo!?). By the time Caviezel (Christ) gets to the mount he looks so much like raw hamburger they might be having a barbeque rather than a crucifixion.

Christ finally, and mercifully, succumbs, the skies darken, the Temple starts crumbling, even the Devil, who showed up at the crucifixion with a grotesque little kid leftover from a David Lynch film, is thrown back into Hell, in slo-mo. We get a closing shot of a naked and unmarked Christ walking out of his tomb, and that’s it. The passion of the Mel is over and sins are expunged.

Well, not so fast there, centurion. There’s the controversy over Gibson’s portrayal of the Jews as Christ-killers (once again). The Romans get off easy, too, as do the reluctant Pilate and the brutal buffoons who do the dirty work for the Jews. There’s enough of it to confirm for his prime audience that Christ really wasn’t a Jew, he was the Christ, and those Jews preferred Barabbas, who looks like a drooling, snaggled-toothed madman, to theChrist.

People flocked to the theaters to see Gibson’s film. He made millions and will make more on the DVD, which many churches bought it in lots for the faithful. But I have to wonder how many people are going to say for the second, third or fourth time: “Hey, let’s make some popcorn, slip into our jammies, turn on the DVD player, and watch Roman soldiers beat the bejeezus out of the Christ for a couple of hours. If you’re one those masochists, you might want to invite Oscar Wilde over. But don’t spoil it by telling him how it ends.

*More elaborate treatment of the paradoxes of Christianity, both Roman Catholic and its spinoffs, can be found in Sebastian Gerard, The Babo Gospels, Essays and Parables on Faith and Reason(2017)