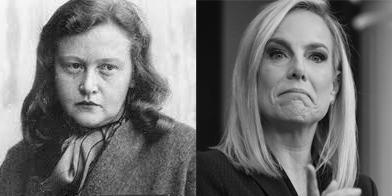 Trump might be the true face of America that was always there, right from the beginning, lurking in the shadows behind the curtain of arrogance that saw the nation as exceptional, morally superior, and historically-messianic in its divinely-ordained purpose. Trump’s MAGA theme only raised the question of “when was America great?”

Here is Trump’s garden troll Attorney General Himmler, Jeff Sessions claiming that accusations that his family-fracturing border policy smacked of Nazism:  “Well, this is a real exaggeration of course. In Nazi Germany, they were keeping the Jews from leaving the country.”  Well, not quite, little Himmler.  Jews were exported to Poland, being a largely anti-Semitic country also, who were not all that welcoming.  But other Jews were actually allowed to leave Deutschland; they just had to leave all their possessions behind to be appropriated by the Nazis.  The “Final Solution” was a form of armed robbery.  But, what the hölle, Heinrich Sessions ain’t much one for facts.

But once again the Trump administration has caused me to wonder how the hölledid Hitler and the Nazis come into being? How, could almost an entire people turn itself over to the whims of a madman, even to the point of taking oaths of loyalty even to death. Narcissistic tyrants love loyalty.  It could never happen in America, I grew up thinking. But, curiously, America has had its peeking-through -the-curtains Hitlerian candidates, surprisingly close and warped into the fabric of the American success story.  Among these were the like of Joseph Kennedy, scion of one political dynasty, who as ambassador to England, was a defeatist and anti-Semite who counseled appeasement to Hitler to the point that he had to resign. British MP, Josiah Wedgewood, said of Kennedy:  “We have a rich man, untrained in diplomacy, unlearned in history and politics, who is a great publicity seeker and who apparently is ambitious to be the first Catholic president of the U.S

Then how about George Bush’sgrandfather, the late US senator Prescott Bush?  This scion of another American political dynasty was a director and shareholder of companies that profited from their involvement with the financial backers of Nazi Germany and armament companies like Thyssen. Newly discovered files in the US National Archives confirm that a firm of which Prescott Bush was a director was involved with the financial architects of Nazism, such that his company’s assets were eventually seized in 1942 under the Trading with the Enemy Act.  The Bush dealings might even have profited from slave laborers at Auschwitz.

Henry Ford was an avowed admirer of Hitler, and together GM and Ford played a predominant role in producing the military trucks that carried German troops across Europe. After the war, both auto companies demanded and received reparations for damage to their German plants caused by allied bombing.

America has always had a bit of an erection for authoritarian systems.  It has been mostly those pesky immigrants who have bought into the star-spangled bullshit.

So putting immigrant children into concentration camps pretty much what we should have come to expect from a guy who thinks there are some “good” Neo-Nazis in America. Trump is somewhat from the same soil of these family dynasties of American “self-made” aristocracy.  Fundamentally, they did not give a shit for the “American dream” that anyone can make it here, because they were quite prepared to do whatever it took, including selling out on their country.  Like Trump they didn’t give a rat’s ass about democracy and were closer to the model of the MAFIA.  There was, and is, nothing great about these families other than their audacious self-interest.

The prevailing trope is that Trump is a political aberration, but he is not that far out. There is no doubt that his behavior is outside the bounds of almost all American political experience. He is especially so in his contrast with his immediate predecessor, an ineffectual weakling who almost completely squandered two administrations trying to be the most genial African American guy you will ever meet. Trump, in contrast, doesn’t mind at all being the most arrogant, entitled narcissist sonofabitch that you will ever meet and, unlike the first Black president, he isn’t interested in being your friend.

“Trump isn’t us” is the typical response. He isn’t America. “He doesn’t represent our values,” we almost desperately cry out to the rest of the world. “He was a mistake, a product of Russian meddling.” And now, he is not an example of the failure of our wonderful democracy, or to use his own words, of our fall from greatness, but of some sinister collusion between his political operatives and an enemy foreign power intent on controlling a us. Somehow this must be corrected.   And, to do this we must call upon our wonderful justice system and its FBI to set things right. I hear this mantra every night repeated on one MSNBC station after another, and read it on numerous Internet postings the following day.

But a little voice in the back of my mind keeps whispering “bullshit.”  Political corruption is a rot that infects the entire system, just as it has infected the entire Republican Party.  Yet, it’s the weakness of the left side of the polity that concerns me most; it’s what’s left over from the feckless, disappointing, Obama years a.  It’s that bullshit adage of the democrats that “when they go low, we go high.”  It’s looking more like “When they go low, we go down.”

America can’t fix itself.  Obama had brains but no balls and Trump is the opposite. Obama seemed more intent upon building his reputation, on proving, but failing, that having an African-American President would not lead to the worst of our national racist fears.  But Trump is proving it’s much easier to build reputation on the personality of a scoundrel rather than that of Mr. Rogers—especially when almost half the country is angry White racists.  Media find scoundrels, chaos, and reality shows more entertaining, and profitable, and a national reality show’s profit to production cost ratio is irresistible, especially when its star delivers the script in daily tweets.

The reality is that Obama was certainly not the face of America, nor would Hilary have been. The true, albeit, brash, ugly face of America is the visage of Donald Trump. His is the face of our racism, chauvinism, greed, misogyny, bellicosity, and ignorance. This is what America has been in its past, and what it is in its present.  This is what America and its history represents to much of the world. It is neither a democracy nor an enlightened nation in which all of its people are considered equal. It is much more a reflection of the morality of Trump himself, a place of winners and losers, a place where winning– –where the end of winning justifies any means to achieve it– –that is what in Trumpian terms, makes America great. There is no transcendent truth about America being a nation of exceptional characteristics and promise, of liberty, justice, and equality for all. That is the reality show America, what represents itself as our reality, but which those in power smirk about.

Ridding ourselves of Trump will not solve the problem of Trump. He will remain behind like the smile of the Cheshire cat, well-represented in the white supremacist, gun-toting, election rigging, courts, and stacked legislatures.  He will remain, beneath the surface, residing in the sly, nudge-nudge/wink-wink sub-world of American racism, and camouflaged in the hypocritical Christianity, and the uncontested faith in capitalist greed.

When I consider how things might end with Trump—I mean end for all of us—I recollect that bit of newsreel of Hitler outside the Reichesbunker in the very last days of May 1945, the Fuhrer reviewing a little line of his last “troops,” a motley group of frightened Hitlerjugend who would be going out to be slaughtered by hardened Russian regulars.  Hitler didn’t give a sheisse for those kids, or for that matter Germany.  Germany had let him down, didn’t win it all for the Fuhrer, despite his abominably stupid military decisions.  It will be no different with Donny “5 Deferment” Trump.

Yes, we have reached our Brandenburg Gate.  It has been over seventy years since the end of the Third Reich and generations of Germans have had to carry the stain of it.  We have been quite good at disguising our ugly racist, genocidal past thus far, but in its social DNA finally found full-grown expression in the form of Donald Trump, and we will pay for that for a long, long time.

Now, if you will all stand and join in singing our National Anthem. Oops!  I meant The Horst Wessel Song.

*Some readers might find the use of the term “bitch” is uncomfortably misogynist.  Sorry about that; sometimes there is a more apt word.

Well said, and so very sad.