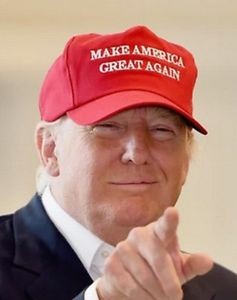 It has been about seven months now since blowhard Donald Trump announced his intention to “make America great again” as President of the United States. Although I have not followed his progress toward that aim closely as near as I can tell no one in the not so great American media has put the question to Trump a to just when he thinks America was great. I have not heard or read a single question from our inquiring journalists, whose whoring for ratings would certainly not let them offend such a compelling reality TV star.

So the hat with the “Make America Great Again” embroidery sits safely atop the bleached dead wombat Trump doo, never, it appears to provoke the question of when American was indeed great.

Well, here’s the answer: It never was great. America has had its laudable moments, but for the most part, by almost any measure, historically, morally, politically, or otherwise, America is not only not great, but it probably never will be. This probably borders on treason to some faux patriots, so I imagine that the FBI will be pressing Apple to provide a way for them to hack into my iPhone. After all, how can you be a great country if you’re government does not have the ability to spy on its citizens.

Right from the “get go” America was not great, even when it was a colony of the also not great Great Britain. Appropriation of the lands of indigenous residents, and subsequent near extermination of the native peoples was merely an extension of British colonial behavior that, if anything, was elaborated with independence. The hypocrites that had settled here to achieve religious freedom were soon conducting witch hunts and seeking advantage over other faiths. Our one great faith is hypocrisy.

Speaking of hyprocisy, completely laughable is that the men (and it was just men) who owned and exploited other human beings could pen that “all men are created equal.” Slavery, America’s original sin, is the sin that keeps on giving, through the Civil War, emancipation, Jim Crow, lynchings, right on up to the rampant discrimination and police executions of today.

Trump’s America was little better at equality in the theme that is the signature of his candidacy—immigration. Forget all that bullshit the Emma Lazarus wrote about the Statue of Liberty. We never “welcomed” the huddled masses, but needed cheap labor. We never became the “melting pot” of social assimilation that civics textbooks crow about. America remains white dominated and one of the most racist countries in the world.

By Trumpian criteria we might achieve a measure of greatness. He first of all considers the ability to bully other nations as essential, an extension of his own personality. He would expand the already bloated $800 billion military budget that is larger than the next sixteen countries combined so that American can maintain its imperialistic 800 military bases around the world and continue to profiteer as the world’s largest arms dealer. Of course, keeping the country at war(s) somewhere is also good for the ”defense” business. Closely allied with this business model is pumping the fear factor that our precious America—that is always characterized as the “greatest country in the history of the world”—is under constant siege by forces that “hate our freedom” and threaten the political joke we call “democracy” and the religious faith that ordained our exceptional historical position in world history.* So add the huge homeland security budget to the paranoia that rules the American mind and has been used to justify torture (Trump would expand torture and approves of killing suspects family members) and extraordinary renditions. What most Americans who never leave our shores do not realize that much of the world regards us as a nation of braggarts and bullies that very much conform to the persona of Donald Trump.

In America, capitalist profit trumps everything.

Everything is grist for the capitalist’s mill. Not content to have insurance companies rig bets on our health care, and drug companies turn government financed research into their overpriced pharmaceuticals, Wall Street is relentless in searching for new ways to squeeze greater profits to sequester in their offshore bank accounts. They would love to grab off Social Security, but they have already succeeded in turning prisons, with the assistance of mandatory sentencing, into highly profitable new business ventures that have resulted in some two million Americans, more than any other country in the world, behind bars. Firearms, another profitable enterprise, assisted by government and NRA-fueled paranoia, results in some 30,000 gun deaths each years, making terrorist deaths a tiny fraction.

America used to have a good public education system until the profit ghouls decided the destroy it by accusing public schools of failure and substituting profitable charter schools that siphoned public school expenditures (to self-fulfill the prophecy). Post secondary schools, their budgets bloated with obscene administrative salaries now result in higher education costs that saddle graduates with debt that can last longer than their professional careers.

And then there is the insidious destruction of the barrier between church and state that not only feeds the ridiculous notion that America is “God’s country” and conflates the flag and the cross, but feeds the fundamentalist Christian religious intolerance that undermines the rights of women and minorities, and feeds the paranoia that we are in some endless state of crusade to preserve our idiotic endtimes religious fantasies.

This is hardly an exhaustive list of the reasons that America has never been, is not now, and is unlikely to ever be a great nation. Yet there will continue to be politicians, Trump not alone among them, who will continue to spout this fallacy that is unsupportable historically, morally, or by almost any other measure. Just to address anticipated objections I agree that there have been times when America has done some great things and there have been some leaders who have done some things we can point to with pride. But we are nothing special as a people and a nation, and thinking we are and behaving as though we are exceptional and entitled to bully other nations with our self-delusion is the surest indication that we are not a great nation, but the national image Donald Trump.*Although if you are white, and perhaps name Bundy, and hate our government, you will be recorded a free pass.

*Although if you are white, and perhaps named Bundy, and hate our government, you will be accorded a free pass.