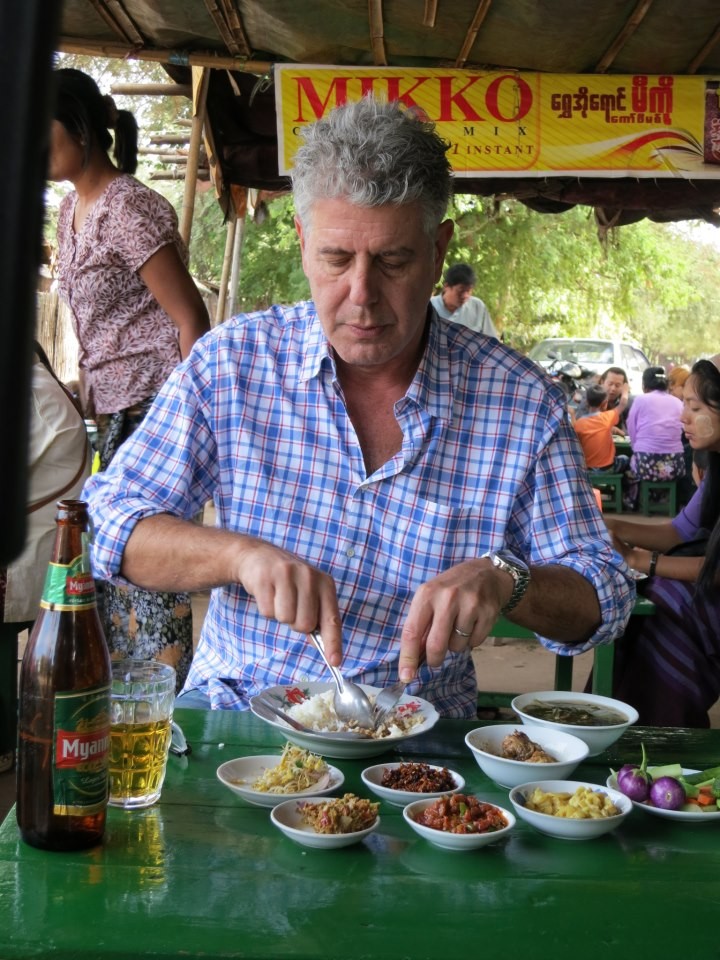 The obit/tributes to Anthony Bourdain continue to pour in.  As a former tour guide, independent traveler and resident abroad it is almost reflexive to draw some contrasts with our different “styles” of travel, as well as some of the similarities.  Bourdain communicated his stories, impressions and opinions about the places and peoples he visited through the immediacy of television (he referred to himself once primarily as an essayist).  But what he did was some where between edges of documentary and reality television. Bourdain was the camera’s subject, injected in to the tableaux of this or that foreign locale as the farenghi, gweilo, lo wai, gaijin, the foreign “other” with a hip and humble American coolness that often clashed with the “ugly-American” image of his country and its tourists.  But essentially it was “performance” and he did it with a non—judgmental participation that submitted and engaged in sort of a fascinating movable agape that dined at the hedonistic altar or street-food gastronomy.

There is something of the dramatic implication now in Bourdain’s biographical “dates”:  Born, New jersey; Died, France.  The epitaph won’t say “how” that came to be.  Not like the grave I once found in a Hong Kong military cemetery for a client on one of my tours, or the, or “drowned in the Bass Strait at age 23” that was on a marker in church yard in Hobart, Tasmania, or the cenotaphs in places of mass graves of war dead and Holocaust victims.  It is a bit of a stretch to imply Bourdain’s demise was in the “line of duty” of, say, a journalist on dangerous assignment, or a traveler-scientist felled by accident or illness in some precarious back of beyond.  The closest one could get is references Bourdain made to “loneliness” of being abroad for extended periods.  Travel can involve periods of loneliness and homesickness, but Bourdain has also been open about other “demons“ in a past that involved substance abuse.  I suspect the involvement of more than loneliness.  Yet the romantic in me almost wishes there might have been a more apt and dramatic arc to the chef’s self-shortened, picaresque life—a poison dart from a Borneo primitive, a sky or scuba-diving ending, a bullet from a Congolese rebel, anything “in the line of work” other than choking on a still-squirming octopus leg. But he took his reasons with him that will forever be considered “tragic” rather than being carried out on his shield.

Although we are both travelers there are certainly differences between my style of travel and Bourdain’s. While he was the subject of his programs, in front of the camera, I was not. Indeed, my purpose was intentionally low profile, fitting in, but unobtrusively. Bourdain was casual and self-possessed in his on-camera approach, but on is still always “on,” conscious that one is speaking to two audiences, those across the table at a pho shack in Hanoi, and the folks back home. It had to be a slightly disingenuous conviviality.  He did it very well, but it must have been a strain.

There are other differences. I for one am a rather modest drinker, and even more so a far more finicky eater than Bourdain.  I have seen him eat the equivalent of roadkill that each time reminds me of a rule of travel that I have subscribed to ever since I spent an entire day in terror that to be a good guest at a Bedouin compound in the Libyan desert of Northern Egypt.  I was in fear that I might have to and just a delicacy of sheep’s eyes.* It was on that occasion that I devised my rule that: it is the better choice to risk insulting your host by declining his vittles, then to puke all over him. But as it turned out on that occasion, there is a; rule I discovered: where you can lie or flatter your way out of a regurgitative ingestion, there is no moral penalty in doing it. As it happened, the visitation with the Bedouin tribe took place during the daytime hours of Ramadan and when the headman said that his women were preparing food for my companion and me, I declined by insisting on respecting their fasting hours. A little religious bullshit and, bingo, no sheep’s eyes, no vomit.

In similar circumstances, Bourdain, might have just tucked in and complemented that they were the best sheep’s eyes he has had since those fried goat’s balls he ate in Algeria. Then again, there is at least one occasion that I can recall on which Bourdain was willing to offend his host. I can’t recall quite where he was, perhaps in some outpost of the British Empire, but he was with a small group at table, Champagne was poured, and a suggestion of one of the group was to toast the Queen.  Bourdain began to raise is glass to his mouth, then frowned and dropped it downward. “I hate aristocracy,” he said, and didn’t drink. I loved that. I have nothing but contempt for those blue blooded bastards that think the world is their private preserve of exploitation.  Let them be offended.  Let them eat sheep’s eyes.

I am writing about Mr. Bourdain, of course, because it is all in the news that he took his own life a few days ago in a small hotel near Strasbourg. I just don’t get that. I remembered being slightly depressed in Strasbourg one time, but that was only because we had missed their renowned season of white asparagus by a week or so. I don’t mean to trivialize Bourdain’s final act in any way, but I can’t imagine that food, which was major aspect of his program could have had anything to do with it.

Bourdain’s medium of communication about his travels was his television programs. Mine, as it turned out, as the written word, travel books, essays and film and book reviews, and some graphics.  Some of it was even about the adventure of eating abroad. Not that I didn’t attempt television.**

It is true that travel can be both arduous and lonely, and this speculation caused me to reflect upon occasions in my own travel experienceson which I seem to have experienced loneliness. Before that, however, I should state that those are occasions were quite different then the circumstances under which Bourdain traveled. As part of his program he was always with a production crew and was always scheduled to be meeting with chefs and other locals as part of the production features of this program. Companionship, conversation, and more must’ve been fairly readily available to him. On two particular occasions, one in Paris, and another in Hong Kong, I spent periods of up to a year living alone in a cramped flat and often going for days without contact or conversation with anyone that I knew. These were times before cell phones and cheap international rates, (in Paris) before email, and was only reading and letter writing to fill the evening hours. Anyone who has done this sort of travel knows that it is possible to experience an acute loneliness or homesickness even in the most crowded cities.

On the other hand, as I explore in my book on travel, The Stranger Is Me, Journeys and Self Discoveries,there is a degree of loneliness that is to be sought out in foreign travel, a sense of being the stranger, the alien, a frisson of danger, and the experience of self-reliance. Travel on television is not that.  Although Bourdain might have come as close as possible with the medium to conveying its sensual and social elements. Part of foreign travel is being out of one’s familiar, comfortable element.  That is how the experience of travel becomes an introspective learning experience; If you come home from a trip the same person that left, you really haven’t been anywhere.

Foreign travel done this way might sometime approach art.  Travel wasn’t always for leisure or education and the word is a cognate of travail, which was for a very long time a better descriptive for what was uncomfortable, arduous, and downright dangerous. It probably wasn’t until the era of the Grand Tour in the 18thCentury that travel turned to being a bit more fun, but even then there were dangers that included highway robbery, food poisoning, and sexually transmitted diseases. So, for a long time travel was a byproduct of other activities: war, famine, persecution, and trade. But most foreign travel today is, or can be, a voyage of discovery.

Still, there comes a day for all of us that is our last day of terrestrial travel, when there is only one, final (I presume) departure to oblivion or some sandy celestial beach where Jesus is walking on the water. Bourdain now knows that destination.  I hope he finds something more appealing to eat there than sheep eyes and goat balls.

*See my essay, “The Winds at Fifty,” in The Stranger is Me.

**I had actually designed at one-time a travel program that was nearly picked up by PBS. But the format was different than No Reservationsor Parts Unknown. Titled Americans Abroad, it involved our finding Americans who had lived in foreign places for many years and become authorities on the local culture, who would be used as our ”guides.” It was a program that I designed with the late Denis Sanders You can read the treatment for the first program, “an American priest in Rome,” in my book, This Urban Life.PBS demurred. After Denis died I took another shot at travel programming for public TV with my proposal for The Compleat Traveler.You can get an idea of how both un-Rick Steves and un-Bourdain I would have been had this program ever got off the ground. Here’s the promo.

Enjoyed this journal entry . You packed lots into it. I need to order ‘The Stranger Is Me, Journeys and Self Discoveries’. The topic of loneliness you touch on is, I know, complex to say the least and we humans are complex animals. Be it feeling lonely while traveling abroad, or right here in a crowded busy city …the feeling is derivative of some many things. Some people thrive on being alone, others desperate at such a prospect. As for Bourdain I can only imagine his loneliness and pain…his eyes betrayed his smile…the camera caught that.

You are so right about how the “camera caught” Bourdain’s inner torment. Technically, he was not out there as an independent traveler, but was on camera–not really “alone”. So I think the loneliness/depression was part of his baggage, not derivative of the travel/travel subject experience (which might even have insulated him from the self-destructive urge–until it could no longer). But he left us wondering.