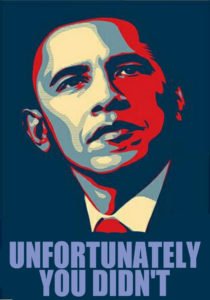 I have written nearly two dozen pieces about you and your presidency in these pages. But this is the first (and probably last) addressed directly to you. Like a lot of liberal-progressives I had a lot of hope and confidence for your presidency. But that went downhill pretty fast and never really recovered. I used to wait with eager anticipation for your speeches when you were first campaigning for the presidency. You were so refreshing following the bumbling Bush and so assured in contrast to the vacillating McCain. But by your second administration I could barely make it through one of your speeches, and for the last three years I made sure to avoid your hollow rhetoric altogether.

My imagined reincarnation of FDR had turned out to be a colossal disappointment. I couldn’t get through your self-congratulatory farewell address in Chicago. It is hard for me to admit that I am not sorry to see you go despite the fact that you will be followed by a megalomaniac tyrant you partly enabled. You were supposed to usher in a new and lasting progressive era in America. Admittedly, our country’s abiding racism must have been frustrating, but you seemed to endure it with perhaps a bit too much equanimity by my reckoning. You never seemed to learn that you don’t win over racists by playing golf with them (even if you’re the Black caddy). So before I must turn my concerns to my contempt for the man you called your “successor” I must finally deal with my disappointment with you.

I have tried to find a summary for my disappointment and I think it begins with losing respect for a guy who endured (if not invited) disrespect from his political opposition. It seemed that, no matter how much insult and obstruction the likes of McConnell and Boehner heaped on you, you always tried to play nice, but they played you. If you act like a Bozo you get no respect. You blew most of your administration trying make friends with people who disrespected you and, unfortunately you lost the respect of a lot of people who did respect you.

Although you cannot be blamed for America’s racism, you were not a great leader, even of your party (under you it got clobbered in congressional races and lost more states to Republican majorities in state houses and governor’s offices). You have not been a great leader of Black people either (Christ, you all but ignored the poisoning of the children of Flint, Michigan and the cop carnage of Black men and women). You were cautious, anything but audacious, a get-along guy with a need to belong, a nudger. You came into office with soaring rhetoric and great promise, but it turned out to be illusory, something that really wasn’t there. You seemed to enjoy bestowing presidential medals on certain people who have exhibited acts of courage but have a callous side for whistleblowers and those who stand up for unpopular causes (Chelsea Manning languished in solitary for months and still is in prison; and you have done little to commute the sentences of young Black and Hispanic young men who have had their lives ruined by a phony “war on drugs” that you also have done nothing about. And Guantanamo? Gimme a break.)

You and Michelle liked to say during the recent Hillary v. Trump campaign “when they go low, we go high.” Sounds noble; but “low” won. Too many times it seemed you were more concerned with image than efficacy. For example, you graciously greeted Trump at the White House and expressed the wish that his presidency would bed “successful.” Trump’s agenda! Successful? WTF! Typical “weenie,” Obama. The guy whose electoral success owes to a five-year campaign against the legitimacy of your American birth, the guy who is going to—as promised—to deconstruct and trash everything that is the so-called “Obama legacy,” perhaps leaving POTUS No. 44 with the sole distinction of being the first Black man to be President, and nothing more? If Trump and his minions get their way it will be the end of LGBT rights, DOMA might return, along with torture and more surveillance, and repeal of any executive orders—an almost complete erasure. So much for staying on your high horse; you won’t bed able to see much of your precious “legacy” from there.

But let’s back up and see what composes that legacy.

You began it by letting Bush and Cheney walk; some BS about how we needed to deal with the future and let bygones be. It was the beginning of Bush 2.0, which you followed by appointing Bush-Cheney supporters Robert Gates to head DOD (who later dumped on you in his memoir) and James Comey as FBI Director, the latter proving your character judgment when Comey sandbagged Hillary Clinton’s campaign with two damning announcements about her emails.

Ah, but that wasn’t enough. You had to adopt all the Wall street boys from Bush’s crash the economy administration—Summers, Geithner, Bernake and the lot. Nothing like keeping the foxes in the hen house so that the first order of business would be to kowtow to the “too bjg to fail” axiom rather than the stimulus of the real economy. Your paltry 800 billion stimulus explains much of the reason for the flaccid recovery that allowed Trump to carry the rust belt states. This was the same half-assed, half measure approach to things you applied when it came to the ACA—preemptively tossing “single payer” off the table and building an (originally Republican) impossible contraption that kept the skim-off insurance companies squarely in the mix. If there was any doubt by then that you are a neo-lib of the first rank Obamacare settled that. Those nice insurance companies played along right up to Hillary’s campaign, then they started jacking the premiums and deductibles.

Then there was that joke of a Nobel Peace Prize. I remember very well the day you stood before the corps of cadets at West Pont and announced an increase of 30,000 troops to Afghanistan. It was the day I knew I had been conned by all his rhetoric about ending Bush’s Middle Eastern adventure. You did subsequently withdraw troops from Iraq, but left bases there and Haliburton and the their profiteers are still cleaning up. In any case you found a new way of expanding US “military” influence in the region through the CIA’s drone assassinations in Yemen, Somalia, Lybia and elsewhere that didn’t involve commitment of troops, but has involved the reported hundreds of innocent collateral victims. Then there was that dramatic taking out of Osama bin Laden by a SEAL team(s), probably strategically unnecessary, but good Commander-in-Chief public relations. Indeed, your affection for the military was reflected in your farewell address in which you said the “highest honor” of your service in office was as Commander-in-Chief. The (ahem) Nobel Peace Prize recipient authorized the dropping of over 26,000 bombs on seven Muslim countries in 2016 (up from 23K in 2015).

Then there was your enhancement of the Surveillance State, the whole Homeland Security apparatus of the Bush-Cheney administration, authorizing spying on (no doubt) many of the same people who voted for you, and probably violating the Constitution that he used to teach about. We just love you strong-arming our phone companies and Internet providers for information about us every time some nut job shoots up a school or blows up a nightclub and you call it the “war on terrorism.”

On Social Policy you legacy is a little bit better, especially with LGBT constituencies. But some of these policies, like repealing DADT, or DOMA—not to trivialize them—are the low-hanging fruit. On the big issues, such as affordable housing, the expenses of higher education, and climate change, not so good. And where elementary and secondary education are concerned you got right into lock step with Bush’s “no child left behind” bullshit with your “race tom the top” bullshit and the ruination of public schools. Trump’s new Education Secretary won’t have to make many changes to further the destruction.

I will also not miss your fondness for ending your speeches with the standard “God Bless America.” (God sure did, with Donald Trump.) Unfortunately, you seemed to rely more upon prayer (as a regular attendee at Congressional “prayer breakfasts”) than on decisive secular action. Where was that action when the Bundy-ites occupied a Federal facility in Oregon? Nada.

So long, Barry. You really didn’t make much of a difference, at least the difference that needed to be made. Now it’s off to writing that book with the huge advance and making those six-figure speeches, stroking that “legacy.” Recently, an article in GQ alleges that you will go down as one of America’s greatest presidents. That’s about as big a laugh as your peace prize.I frankly don’t see how anyone could put you in the same class as Lincoln, FDR, or LBJ, despite your self-congratulatory farewell speech in Chicago.

Unfortunately, when the Trumpies finish erasing your modest accomplishments I think you will go down as that first (and maybe last) Black President whose tenure served to remind us that we are one of the greatest racist nations. Otherwise your presidency will not be much missed from this quarter, especially since your lack of boldness and vision, and failure to deliver on promise must also be called to account for the circumstances responsible for the election of a successor who might well make us remember more fondly your disappointing presidency. Too bad you lacked the “right stuff” to deflect this country from the course that has led to Trump.   I feel I have been conned. Now it’s time for those dupes who voted for Trump to have that feeling. Only this time it’s going to be retrograde. It is said that people get the government they deserve. Let’s get on with America’s descent into the sludge of self-destructed empires.