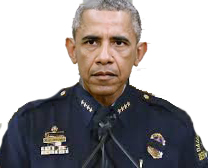 American cops have long had an uneasy relationship with Barack Obama (maybe because it has been difficult for them to pull him over for a broken tail light). There’s a lot of right wing rhetoric out there from the President “hating cops” to, as was claimed by Jim Pasco, executive director of the National Fraternal Order of Police, after six law enforcement leaders met with President Obama today, that Obama “has never walked in a police officer’s shoes.” Naturally, Steve Inskeep, NPR’s interviewer who is too much in love with his own voice, neglected to ask Office Pasco if he has ever walked around in American city streets in Black skin. With the Dallas aftermath and the endless string of encomia to the police deference is the order of the day.

Unfortunately, it is for Mr. Obama as well (or as usual). The same NPR story reported that the President, notorious for kowtowing to politicians who hold him in contempt, bent over for the good officers, with an unbelievably stupid false equivalency. Perhaps anticipating post presidency incident with a broken tail light, Obama decided it was a good idea to state that he considers the Dallas police massacre a “hate crime” like the hate crime of Dylann Roof in Charleston. Roof killed nine African-American church goers, a cohort that it difficult to determine any commonality with American police who not only have killed dozens of African-Americans since that incident, but who have done so with complete legal impunity. To equate Micah Johnson’s vicious crime of revenge with a clear hate crime is not only a political deflection, but to bury its message—violence begets violence.

What is clear is that this public relations meeting between a President who can be relied upon to back down and the “brotherhood” associations for the police is that police are unlikely to clean out the racists they have in their forces, or to take a sane stance toward American gun culture and the laws that underwrite it. Denial begets denial. There is a reason behind the militarization of American police forces captained by officers who uniform up as four-star generals with chests bedecked with campaign ribbons—cops believe they are at war. And, if you happen to be Black, a broken tail light is a causus belli. It’s going to take a lot more than a bullshit song and dance of the President playing Jets to Officer Krupke to stop the mayhem.