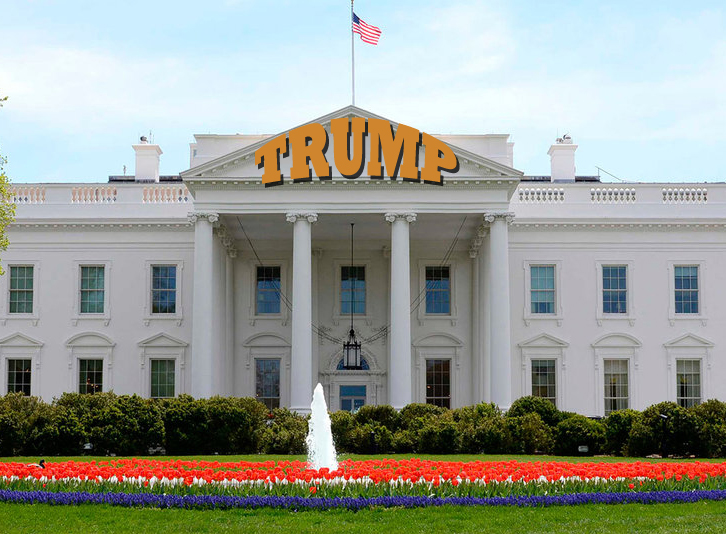 Several of my correspondents have communicated to me that, like me, they have desisted in their use of media since November 9. One has even taken to tossing her newspaper directly from doorstep to trash bin. I no longer take a paper, but I have not looked at any programs of MSNBC (Hayes, Maddow, O’Donnell) since they managed to miss everything. NPR, another regular of mine, I have also been avoiding, although I did accidentally catch a Steve Inskeep (Finnish for “I am in love with my own voice”) interview with a Trump spokesperson that convinced me that NPR will fall right into line with normalizing the new regime. (If you don’t roll over you might not get access next time.) Audiobooks are my chosen replacement for the bad punditry and kiss-ass journalism that just lets the lies and bullshit go unchallenged and sound “truthy.”

The “motto” I have had within sight of my desk since my days in grad school has always forced me to engage its harsh reality before I ever wrote a word. Panta rei kai ouden menai. I keep in the original Greek from Heraclitus: “all things change, nothing remains the same.” It places one squarely in the present and notifies one that the moment we momentarily possess is process, not permanence, and we will never have that moment again, nor could we ever be in exactly that kind of a moment again. One cannot step into the same river twice, nor will one be the same person.

ΠΑΝΤΑ ΡΕΙ ΚΑΙ ΟΥΔΕΝ ΜΕΝΑΙ.  So be it. It had a special poignancy this past November 9, when a man for whom “reality” is whatever he says it is, was elected on the promise of returning America to a time and circumstance that exists (like Muslims dancing non rooftops in New Jersey) in his imagination. Astonishingly, there were enough voters willing to join his fantasy and its appeal to their hatred, racism, misogyny, and delusion. Just seven decades after helping to defeat fascism in Europe the self-anointed “greatest country on earth” has managed to find a way to embrace authoritarianism. Panta rei kai ouden menai. “What goes around, comes around,” the popular colloquialism has it. Well, if you accept Heraclitus, one has to add—“not quite.” And here the implications are of great significance and consequence.

To ignore Heraclitus is to invite disaster.

The last era of fascism was brought about in a world rocked with economic depression. America managed to avoid the appeals of authoritarianism and false promises of past eras of greatness, not that there was not some concern [see Meet John Doe]. Sensible, progressive economic and social policies prevailed. Paradoxically, fascism did contribute to pulling us out of the depression by creating a world war that fired the economy to full blast.

But VE and VJ Day engendered a new normal obedient to Heraclitus. The very economic and structural advances that came from the New Deal and WWII set in motion a military-industrial complex and an anti-communism paranoia that now imperials the world with nuclear armaments, failed states and international terrorism, relationships between genders, races, and faiths are evolving and vastly different than they ever were, pandemic disease and disaster from environmental change are engendering global population movements upsetting. Global economics have completely altered corporate production and former trade relationships, shifting much of the world’s wealth into the hands of the few and creating great swaths of unemployment and poverty. There is no possible return to the status quo ante.

Yet, much of the world wants to hold Heraclitus at bay, embracing authoritarian regimes in China, India, Russia, Turkey, and elsewhere in religious fundamentalist states. They all promise past “greatness” and base their militarism on alleged threats to their culture, faith and hegemony. Fascist regimes are always paranoid. And now America, a state with military bases bin 180 countries, the world’s largest Navy, Air Force, number of nuclear warheads, with a commander-in-chief who maintains we are under threat, man whose belligerence is unconcealed and legendary.

Trump’s electoral victory also proved that things are never exactly the same by a quantum leap. Trump’s leap was to take his mastery of the medium of television and his audacity of unreality and turn them into positive political capital. The oxymoronic “reality” shows, most of them based on rural, anti-intellectual, Christian fundamentalist views and norms, had conditioned the American public to receive the most blatant untruths, bigotry, sexism, anti-science, a rejection of anything that conflicted with their fixed, biblically assured view

That big red swath that bled from the rural states into Pennsylvania, Ohio and Michigan to give Trump his victory is what is sometimes called the “fly over” America that the Democrat liberal coastal elitists failed to understand and appeal to. This is primarily the White, Christian fundamentalist, conservative America that, in fact, would never accept the representation of Democrats because Democrats represent everything they hate and detest—Blacks, Hispanics, Muslims, LGBTs, uppity women, intellectuals, evolution and climate scientists, atheists and bureaucrats. Republicans will never make common cause with these demographic cohorts because they regard them as anti-American and the enemy in a culture war they have been fighting pretty much since Brown v. The Board of Education. But I would add one more descriptive: they are rural, White, Christian Fundamentalist, conservative hypocrites. They hate government but take more Federal aid in farm price supports, rural infrastructure programs, welfare, social security and food stamps without which they would fall into abject poverty. They are far more government program dependent than the minorities they like to blame for entitlement deficits and special attention. The states they live in receive far more than they give in taxes. The failed economy that they blame on liberals is actually the result of their consistent voting for trickle-down economics for nearly forty years, and their jobs that have decamped for factories abroad are not the result of government trade policies but their sacred capitalist corporations seeking high profits from lower wages. They have embraced wholeheartedly wars to keep the hated communists and Muslims at bay and turned the American military into “love the troops” fetish that results in the pumping of hundreds of billions into a defense industry that has also become the world’s largest arms dealer. And, of course, when it comes their attitudes toward those different from them and of different beliefs they are the ultimate hypocrite Christians.

Now they rejoice in thinking they have one of their own in power—a New York born over-privileged bully-brat who faked his religiosity and regularly changes trophy wives, established a fake university, and a raft of failed products he had produced offshore. He pays less taxes than they do and probably privately regards them with contempt. But all that trumped a possible woman president to follow the Black president they abhorred, even policies like health care and higher minimum wags. The final hyprocrisy: allowing themselves to be conned by the big city who promises them a return to a time that, if it ever was, now only exists in their reality show deluded imaginations. Trump played them for the fools they are, like a slick carny barker at a country fair. He never needed, or wanted to get close to them. The rallies were “huuuge,” orchestrated with the “get him (her) out,” “blame the media,” “lock her up” chants, and he will likely have no more use for them now than he had for the Trump University suckers he conned. This was not so much an election as it was a sale, by a salesman whose first public act as President-elect was to settle $25 million on a suit against his faux “university.” There will be buyer’s remorse.

Most of Trump’s supporters want to go back to what they think America once was, or what they imagine it was. They want a leader who will prove Heraclitus wrong. They want their jobs back from China, Mexico, Indonesia and India, and from automation and cybernation—and they are not getting them back. They want to pretend that climate is not a concern, but Nature doesn’t give a rat’s ass for their self-delusion. They want to believe that America needs to be walled off to Mexicans and Muslims who want to take their jobs and install sharia law, but these are false threats, delusions that only feed their bigotry and scapegoatism. They want women to shut up, bake cookies and obey men. They want LGBT people to, what?, go away, or be exterminated. They want their guns unregulated and their (so-called) Christianity co-equal with government.

And most of all they want their country to be White, and ruled by Whites.

But the question that now prevails—the biggest question of portent for American (and Heraclitus)—is whether this election is the last gasp, a phase that America almost had to go through, for the residue of a history that never dealt completely or honestly with the ugly racist dimensions of Christianity and capitalism. Or, is it the first phase of what will be a long and insidious form of “friendly” fascism that controls all the elements that confer authoritarian political power.

One thing is for certain—ΠΑΝΤΑ ΡΕΙ ΚΑΙ ΟΥΔΕΝ ΜΕΝΑΙ—either circumstance will not remain the same, only the direction of inevitable change is uncertain.

Relax and stay healthy. We’ll survive. They’ll self-destruct. It will be over soon.

What’s worrisome is how much collateral damage there will be from their self-destruction.