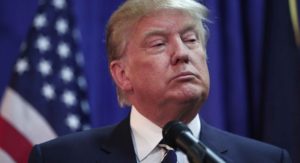 I have travelled to over seventy countries, explored hundreds of cities and spent years living abroad in England, France and Hong Kong, enough to confer some understanding of what foreigners think of America and Americans. It is not consonant with the hubristic self-regard in which we hold ourselves. There are those who like and admire some of us and some things about America; but I have encountered plenty who see us as the arrogant, boastful yahoos waving flags at the Olympics and expecting everyone to kowtow to what we allege is not only “the greatest nation on earth,” but the greatest nation in history,” “God’s country.” Now we are a country that falsely claims we will be returned to a former “greatness.” What former greatness?

Take a slice of American history, for example. America likes to celebrate its “greatest generation” for “winning WWII.” But travel to Russia, and don’t expect a big round of applause where the war memorials call it the “1941-1945 War” and where the military and civilian casualties numbered over 26,000,000, compared to a little over 400,000 American military losses, and where the equivalent of Rosie the Riveter was Ludmylla the fighter ace or Sonia the tank commander. And it was a war against fascism that America had to be dragged and mugged into fighting (but at least we managed to keep our African-American and Japanese soldiers well-segregated from their White regiments to protect and preserve the “American way of life”). That “greatest” generation fought bravely to defeat the Axis; but it also produced the leadership that gave us the military-industrial complex and the Vietnam War. It has also given us an imperialistic foreign policy that has resulted in an American military presence (as was proudly announced on yesterday’s Veteran’s Day) in 175 countries.

Travel has allowed me to see Auschwitz and Dachau, Stalin’s prisons, museums to the Holocaust and the Rape of Nanking, to walk the killing Fields of Cambodia and slave quarters in the American South, to step into the sands that Israelis and Arabs killed each other over. I’ve been at ground zero in Nagasaki and Hiroshima, Pearl Harbor and the World Trade Center. I could go on, but it would only belabor the point that there is not a lot greatness out there, historically or current, far more is conspicuous for its absence. Not much from us, or anybody else. “Pride goeth before a fall,” scripture tells us, and it often does.

But there is a lesson in all the atrocitry, slaughter and inhumanity—that its authorship, it etiology, is most often in pride and proclamations of “greatness,” of the superiority and exceptionalism of one culture, political system, or faith, over all others. It first festers in historical revisionism, and always simmers in the fear and division that one’s national greatness is under assault from those who “hate or freedom” or would multiculturally adulterate our ethnic and racial purity. The political shibboleths are always laced with “unity” and “equality”; but the wink-wink-nudge-nudge is always it’s “them” or “us.” This was the Trump realpolitik that all the pollsters and pundits failed to discern. They read the confidence of the white supremicists and the Black-Lives-Matter-and-Obama-hating racists as an anomalous residue of a time “past,” and the bold, scarcely-disguised racism of candidate Trump as the ravings of a sure-to-be-rejected egotistical lunatic. Wrong.

With the election of Donald Trump as the most prominent American the world will know we have finally shown the true face of America, and it isn’t pretty; it is ugly and sinister. Hillary Clinton may have won the popular vote, but the reality is that there were a sufficient number of angry, White, bigots to elect a lying, narcissistic, racist to the highest office in the land. The Trump election has at least done the service of showing the world that the election of Barack Obama was an anomalous blip in what had been mistakenly thought to be the “end” of America’s racist history. In fact, even a educated, not-uppity, approval-needy Black man in the White House only served to expose the virulence of an abiding racism that had grown desperate under the demographic threat of the loss of White supremacy to immigration. By luck or prescience Trump saw and seized his moment in which he was able to prove that no racist dog whistle, no insult to women or veterans, no lie, no depth of ignorance would deter an ignorant constituency baked in reality show delusion from its fascistic desire to make America white again. Indeed, paradoxically, there had been eight years of Obama’s appeasing political weakness and lack of vision to abet the coup d’etat. The old forces had proven it possible to stifle or force compliance from the Black President eager to be accepted, eager not to be mistaken for John Boehner’s caddy on the golf course.

For some the election of Trump has been an occasion of lamentations. For others, a signal of a new accommodation, a sweet surrender to a new normal. To these I say to hell with you, since hell is what you will get anyway. I say WAR! Decent Americans need to oppose, frustrate, the Trump agenda at every level and by every means. If they want to play by the “end justifies the means” rule then so must we. I do not give a rat’s ass for the Obama axiom “when they go low, we go high.” We can play just as dirty and go them ne better. We have thought we were “above all that” and Obama has shown what it costs. Trump is not going to make nice, no matter how sweetly (Kenyan-born Muslim communist) Obama welcomed him to the Oval office. Trump didn’t run on niceness, and neither are his constituents nice. He is a small-minded, vindictive bastard and he will not be gracious in victory.

This happened not just because Trump led a highly-motivated bunch of ruthless racists to victory. It also happened because Democrats have been a bunch of stupid weenies with a weak leader in the White House, because they proved they were a part of the despised “establishment” with Obama’s and Clinton’s Wall Street connections, with the DNC sand-bagging of the candidacy of Bernie Sanders (at which point I probably wasn’t the only person to cancel my contributions), and with egregiously mistakenly betting it could ride Obama’s 53 percent approval rating to an Obama 2.0 victory. Now their party might be screwed for several cycles.

Call me cynical. But I embrace my disparagement, if that is the price of living with truth. In these pages I have written about a creeping fascism in America and now it appears to have arrived, ratified by our over-glorified electoral system.

But there is some hope. Authoritarian leadership is always subject to overreach and, as tyrants from Caesar to Hitler have shown us, they don’t always expire peacefully in their beds. Often, it is their very followers who are happy to assist them on they way. Mt. Trump will need to take heed of such history. To promise more than one can delivers to a slavering, armed, angry, bigoted mob that will regard compromise as betrayal can be a risky business.

Years ago I read Lederer and Burdick’s The Ugly American. It is a political thriller, but the title made me more self-conscious as a foreign traveler. I was eight months travelling all over Europe in 1979 and 1980, Ronald Reagan had just been elected President, which I regarded as embarrassing, and I certainly did not want to be seen as an ugly American. So embarrassed was I, in fact, to be an American, that I purchased two Canadian flag stickers which I applied to my suitcase and my camera bag. I subsequently endured the embarrassment of being in Europe, Africa and Asia during he Bush-Cheney administrations, but the Trump presidency will take things to a new low that I would not have thought possible. To be an American abroad will be to suffer through the humiliation of awkward questions, snide remarks, a shameful feeling when displaying your passport, and that awful stain of being regarded, like your President, as an ugly American.

The anglophile me wants to retreat to England, the rest of me doesn’t want to show my face outside the country.

A bit of a dilemma. There’s the Brexit mentality to deal with in England these days, and i was living in London when Maggie Thatcher was elected PM (although I am mot making an equivalence with Trump). The liberal, open places to run to ae shrinking.