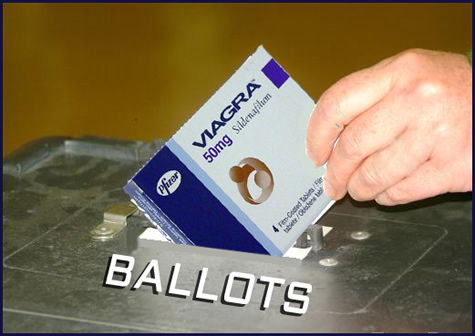 Preamble: Less than two weeks before a Clinton or a Trump presidency I went back to take a look at how I was feeling about American politics and the electoral system in the first Obama administration. As you will see my disillusionment had already set in. These days the talk is all about Hillary’s emails, Donald’s gropey little paws and elections being “rigged,” proof that “electile dysfunction” begins well above the belt. Anyway, some things have changed, too many remain the same, and some cautious prognostications have come close to true.

The latest iterations of the Cialis commercials have obviously take a heed of the focus groups: guys just are resisting doing what is the mantra that all the pharmaceutical companies employ to push their drugs—“Ask Your Doctor.” Guys apparently don’t even want to talk about this with the guy in the white coat. So now the commercials basically say, “Hey, get some balls, man. Get in there and ask your doctor to Rx you some of the blue booster.”

Whatever the salutary functions of these medicaments, all is not right with a nation of guys who are “ready when that special moment arrives.” Indeed, if an apt metaphor is called for, it is more like the panicky feeling of one of those guys who are “lasting more than four hours and should seek immediate medical assistance.” I won’t push the parallels any further except to remark that, after Watergate, witnessing Jimmy Carter screwed by the dirty dealings with Iran of the Reagan people, the blatant theft of Florida in 2000 by the Bush gang, and the character assassination of John Kerry in 2004, not to mention the influence of special interest money in numerous legislative races, and California’s suicidal obsession with the initiative process, America’s elections are approximating the “free and fair” standards of Pakistan or Iran.

There has always been the myth in American lore that our so-called democracy was self-correcting; that there is a providential equilibrium that exists between the swings of the pendulum that trace the arcs of American ideology from Right and Left. That was supposed to be the comforting secret of an informed people with universal suffrage. If that self-inflicted joke didn’t die in 2000 then we will never get it. Actually, there is no equilibrium; things never stay the same. Panta rei kai ouden menai, our old friend Heraclitus used to say. Look at it this way, the pendulum might trace roughly the same arc; but the pendulum itself has shifted well to the Right of where it used to be.

It is especially easy to see this in both the language and conduct of political behavior. Right-wing political persuasion has effectively captured the linguistic high ground, as well as the volume button, on political discourse in America. Words like “liberal” and “progressive” are uttered as expletives by the Right, handled with tongs by the media, and unspoken at all by the few politicians who would fit the description. The associations between those terms—that describe the same ideological views that were responsible for our Constitution and Bill of Rights—have become associated with socialism and secularism (both of which are already salutary parts of our society) but everything from child abuse to alien abductions. Meanwhile, nobody dares to put a photo of an American soldier with his legs blown off next to the word “conservatism.”

In consequence, we have the travesty we have witnessed since the Obama election: an almost obsequious and pleading attempt at bi-partisanship where there is absolutely none to be achieved; a rolling over to Wall Streets threats that they are ”too big to fail”; a weak and spineless national health bill; back burner-ing of climate legislation; hardly a peep about Guantanamo or DADT; and what promises to be a laughable bill to re-install safeguard regulations on the financial institutions. Oh, and did I mention that the Defense budget and the two Bush/Obama wars are “off the table” as far as reducing the budget deficit that they contribute most to.

Scare Cards. Increasingly, Democratic Party fund raising organizations are employing little terror tactics. A not untypical email missive might use a quote from some right wing jerk, a Palin or Rand Paul, or those old standbys Limbaugh and Beck, along with the message that if I don’t donate they will be elected or their odious views will replace the Constitution. I don’t like it when the scare card is played on me, especially because it seems to be to be serving the purpose of moving the emotion so far into Nazi-Boogieman-land that it serves the additional purpose of camouflaging that the Democratic Party has devolved into a bunch of cringing weenies and Bratwurst Obama is a non-leader who as retained many of the players and most of the policies of the Bush Administration I thought I was contributing to expunge last time.

So how are people likely to regard the chances of their electoral participation having any meaningful effect on the people and issues that matter to them? It’s not all that much of a sample, but everyone I know who was uplifted by the last election now slams the receiver down when the Democratic fund raisers call. We now find ourselves in the perhaps unprecedented political position in America where both sides—the disaffected liberals, and the idiot Teabaggers—both want to throw out the rascally useless incumbents. Both the Left and the extreme Right are experiencing electile dysfunction.

For someone who has been politically aware pretty much since the second Eisenhower administration and suffered through Nixon-Reagan-Bush-Bush, to arrive at the credibility of electile dysfunction on the heels of what we thought and hoped was a genuine sea change in American politics is to be ideologically whip-sawed. It is one form of disappointment to lose (or be robbed of) an election that goes to the likes of one of those creeps immediately above. It is quite a different sort of disappointment to think you have finally seen things turn around and rather than doing a one-eighty, do a three-sixty. (OK, three-fifty, but we are pretty much right back where Bush and Cheney left us.) Audacious hope unfulfilled is much closer to despair. It might be better to have loved and lost than to never have loved at all, but the result is still that you feel like a loser.

Ask Your Doctor? Maybe he would counsel political celibacy. Forget the Obama pill; the moment will probably never be right with him again. The excuses are getting tired: he had to deal with the huge leftover Bush problems, the economy melted down, he’ll deliver in his second administration, he has a headache, etc. etc. Screw that, thank you. You don’t continue a trillion dollar misadventure in Iraq and Afghanistan, throwing borrowed money into the sand, when you desperately need it to resuscitate an economy that was destroyed by “off the table” spending and Wall Street greed. He’s a talker, not a walker.

Some of my political confidants think that the Teabaggers and Arizona racists are the biggest problem and that we might even see a hard turn to a Rightwing-Libertarian atmosphere in the next general election. But I don’t see them doing that much more damage than the people I voted for and contributed to are already doing by omission and spineless “leadership.” I don’t see the rabble and the babble taking over, and I don’t care to hear such fear-mongering prognostications from the DNC when they call to say they want me back. Two things have to happen for the whackos to take over: they have to harmonize their cacophony and find a leader who can conduct it and, people like me have to prefer political celibacy because the last time wasn’t good for us. Rather, I think that the Obama continuance of the Bush administration is likely to continue the country’s slide into a “new normal” of a more depleted middle class, and larger “proletariat” with poorer jobs, education, housing, and health. The struggles in America a will be not so much to climb upwards as to keep from falling downwards.

Then again, I have to keep reminding myself that I am not debating ideology and issues in a seminar room; that, in the political world, most people care more about what they prefer to believe in than what they need to know.

I’ve been wrong before.* I sure feel like I was when I poked out my absentee ballot chads in November of 2008. I’m not even sure that, when it comes to electile dysfunction, you should “ask [this] doctor.”

*I just can’t seem to remember when that was.