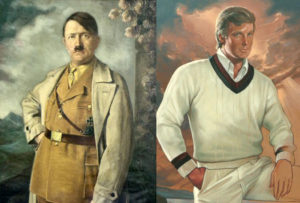 Growing up in the years immediately following the end of WWII I came to not only wonder how an evil country like Nazi Germany that followed a minster like Adolf Hitler could come into being. My next thought was, as most any American would agree, that such a regime could never happen in America. I was mistaken; I just didn’t realize how mistaken. Indeed, the elements of a fascist America always laid just beneath the surface of my country’s veneer of self-aggrandizement and denial—the slavery, the Native American holocaust, the lebensraum of geographic expansion, the Aryan white supremacy, the scapegoating of Jews and other minorities, the glorification of the military. What we lacked, ironically thanks to our social diversity, was the ethnic solidarity and attitude of victimization, or we might have gotten closer at times before the emergence of the like of Donald Trump.

When the Republican nominee for President was asked, after he denigrated the “gold star” Khan family, whether he had ever made any “sacrifices” for his country, the Vietnam dodger and fake charity contributor replied without irony or hesitation that he had “built many buildings”. Huh? That must be where he acquired the bone spur on his foot that kept him out of Vietnam.   And the terror of all those bankruptcies. Oh, the sacrifice.

At least Adolf served in WWI and got himself thrown in the clink for his Munich political activities, where he wrote (or dictated) Mein Kampf. The Fuhrer had a lot of faults, but at least he had a pair. Adolf was also a little weird in the sex department, although probably in a different way than the groper-mysogynist Mr. Drumpf. And the Furher never produced offspring, but might have approved of those Aryan SS bookends sired by the Donald.

So the similarities between Hitler and Drumpf go just so far and, since the latter is unlikely to get his reich, we will probably never get to know whether he turns the world in to some horrendous reality show of throwing Hillary into Guantanamo and Muslims and Mexicans into death camps, all ending in nuclear Armageddon over his avenging some slight by a woman he groped. There is a good chance we will dodge this bullet and Drumpf will retreat into his tower to contemplate how he can assuage his ego and plot his revenge. But that big “L” for “loser” will be emblazoned on his scowling brow forever, and put there by a woman. He could take Adolf’s exit (but that takes a pair, too).

What’s more disconcerting is that this narcissistic prick managed to coalesce something in America—a set of contemporary trends with deep-seated character flaws—that might augur that not only is America never likely to be “great” (whatever that effing means), it never was and never will be. What Drumpf managed to do was to surface all the ugly, dark side of America and give it a political constituency. His toxic brew started right at the core of America’s fundamental hypocrisy—that ”all men are created equal” the philosophical reality show that ran right along side slavery, genocide, nativism and class divisions. His “birther” movement was founded on a solid soil of racism that didn’t even require a yellow star of identification. The rest fell conveniently into place: America under assault from 911 to jihadist insurgents and “job-grabbing Mexicans,” Black Lives Matter “street thugs,” sneaky dealing Chinese–all to cover an economy brought near to ruin by endless wars, ruinous tax policies and Wall Street unfettered. America needed a strong Furher, a Duce, a Putin to take charge and set things aright.

But even if all of these variables were not in alignment there is the most distressing component of America’s too easy flirtations with fascism—that there are enough abysmally stupid Americans so easily conned by the likes of Donald Drumpf. That in the 21st century, only seven decades after having fought history’s greatest war against fascism and militarism, there would be enough Americans ready to vote their fears, ignorance, bigotry and religious prejudice for the closest political figure to Adolf Hitler since the burning of the Reichstag. This would not have been possible without the complicity of a major political party whose political ends justified any means, from dog-whistling racial prejudice and scapegoating Mexicans and Muslims, to corrupting politics with religion, to rigging the electoral system, destroying public education, creating a private prison system and filling it with minorities, allowing banks and financial institutions to manipulate the economy for their own greedy bends, to support of militarism and endless wars, etc., etc.

And finally, even to the surprise and regret of that major political party, its Faustian bargain with its extreme right has produced its own nominee from Hell.

Perhaps the most concerning aspect of the Drumpf candidacy has been the way it has torn away the scab that covers the ugly truth beneath the chauvinist rhetoric that fogs American political discourse in the public arena, especially that which falsely evokes some notion that America is, was, or might ever be “great.” It has unleashed, in the economic sluggishness, globalism, fear of terrorists and Blacks insisting that their lives matter, changing ethnic demographics, a stew of “crisis” that has unleashed and emboldened the white supremacists, misogynists and Christian zealots. One can almost hear the beat of the jackboots on the Dallas streets, giving metre to the Horst Wessel lied replacing the Star-Spangled Banner before the Super Bowl. Their furher already threatens expulsions, torture, religious rejections, assassinations and jailing his political opponent, to Nuremburg-like cheers of approval and thuggish behavior.

Also worrisome is that a Drumpf presidency would align with a world of increasingly authoritarian regimes: Russia, China, Iran, Syria, Turkey, Israel, Egypt, Philippines, India and Pakistan, North Korea, among others, where “the enemy of my enemy is my friend” is the tenuous rule of diplomacy to keep nuclear arsenals shuttered. The world has long been sliding in this direction and America is no exception. America would be even less a “leader” and peacemaker in a Drumpf regime that would mirror its corporate antecedents, a street gang mentality ruled by unfair advantage, brute strength and, in full keeping with the personality of its leader, vengeance against any entity that might make it a “loser.” There might be nothing more dangerous in a nuclear-armed world than a guy who dreads being a loser. Drumpf is fundamentally a punitive man. Any examination of his “policies” is illustrative of that fact: Mexican immigrants would be summarily exported; Muslims would be categorically excluded; Black activists would be imprisoned; ISIS and the Iranians would be vanquished; even his opponent in the election would be locked up.

There is no reward in Dumpf’s fascist, punitive America. He never speaks of what will be achieved—other than the mantra that we are going to live in a reality show constructed on some fantasy time of American “greatness.” Drumpf is a man who is driven to settle scores, to avenge slights. His agenda is an enemies list of scapegoats.   He has devoted his life to building gaudy hotels, casinos, beauty pageants and a reality show. This is not a man with a social conscience or much of a worldview beyond celebrity and a glitzy cult mof personality. Yet Drumpf is, ironically, right about his claim that America is in decline—if totally wrong as to the reasons for that decline.
Nothing would accelerate and exacerbate that decline than a Drumpf presidency. This is because, other than gilded toilet seats, casino chandeliers, and the next Miss USA, Drumpf is a man bereft of vision and possibility. He has only the rear-view vision of some mythic past “great America” that appears to harken to a time when only white property-owners were allowed to vote and govern. But there is no vision, no hopeful, positive future, only a grim, dark program of elimination, prohibition, perhaps extermination of those very elements that are indispensible in pushing—usually with reluctance—this country toward betterment, much less “greatness.” These are the elements of diversity that come with the immigration of Hispanics, Asians, and yes, Muslims, that are the infusion of new blood and energy. The xenophobic knuckle-draggers who have bought Drumpf’s con job on them will learn that he ill be unable to rig and bully the economy the way he might some real estate deal, or get their jobs back from the countries where he has his own commodities manufactured.

When Drumpf does indeed become a loser—at least politically—his acolytes and followers will remain ignorant, armed and angry, if not more so. Some talk openly of rebellion, civil war, even “taking out” a President Hillary. Were Drumpf to be elected his presidency would only serve to prove that his constituents had been conned. The harsh facts are that there is little or nothing that Drumpf can do to redress the fundamental economic complaints of his followers. The “great” America he harkens was never destined to be more than a passing period. The happy post WWII factory worker and mine or farm worker heading to work with his lunch bucket and a high school education was already heading for extinction in economic evolution. Automatation, cybernation, IT, busted unions, globalization and climate change upset their world as concussively as that meteor did the lives of the dinosaurs. Employment in manufacturing and agriculture has remained flat for several decades and Drumpf’s adoring “lower-educated” constituents are going nowhere in the new economy other than Trump University. Thanks to the other pillar of their economic faith—capitalism—their remaining manly jobs, exported by their beloved corporate CEOs to China, Mexico and Indonesia for higher profits and asset values, are not coming back to the rusting industrial wastelands of Michigan, Ohio, and Pennsylvania. And Drumpf isn’t getting them back. The two economic areas that hold some promise for those displaced steel workers and coal miners—public infrastructure (remember the WPA and the CCC?), and, related, green energy—are likely to fall afoul of right-wing fiscal parsimony and climate change denial.

This is the perversity of capitalistic economic systems; they feed on novelty that feeds the consumption on which the system relies for its growth. Drumpf might serve up Mexicans, Muslims, and women as the job competitors for his white working class jobs, but it is their beloved capitalism that has screwed them over, not these scapegoats. Live by the market; die by the market.

Drumpf is in many respects the arrival of the final prophet of neo-liberalism, trumpeting that his reputed success in real estate is the economic model for the nation, that the Constitution can be substituted by The Art of the Deal and that hortatory diplomacy can be replaced by the equivalent of schoolyard bullying. There is no longer, beyond the military in his view, any need for a public sphere; with an unregulated market and the moral guidance of a Christianized social system the golden city on a hill will glitter in the sun unobscured by pollution and sinking in a rising sea.

Here is where they put the probability as of Sunday of each candidate winning the election:

As the old religious adage has it: “From your bookie’s mouth to God’s ear.”

I will assume you are referencing this morning’s news, and not my posting.

Prof Clapp, take me to Italy with you please!

We might have a little room somewhere at the villa. Of course, you will not be required to convert to Catholicism,but Thursday will be your day to cook.

I’m ready, so many options and I do a fair Risotto ai funghi