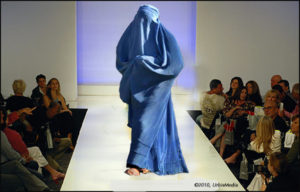 The French are into their current version of l’affaire Dreyfus, having recently come up with a law banning the “burkina,” or the bathing costume designed for Muslim women to retain some of that modesty “bag of laundry” look while bathing (or laundering) themselves at French beaches. Some beach cities have refused to comply. Burkinis were not specified in the bans, but the order simply states that beachwear must be respectful of good public manners and the principle of secularism. That sounds reasonable enough, but remember, this is France (or think America and Benghazi hearings). Actually, it is a rather sticky philosophical issue and getting out of it can be like getting out of a wet burkini with stuck zipper. I learned that when I first addressed this issue six years ago with the burqa. But my opinions remain pretty much the same. Hence, my reprise of that post. 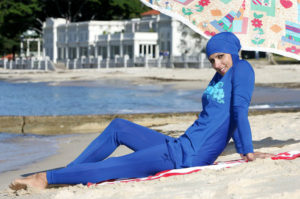 Burkini, baring it all.

The French Senate on Tuesday overwhelmingly passed a bill banning the burqa-style Islamic veil on public streets and other places. The measure affects less than 2,000 women, but it has been widely seen as a symbolic defense of French values. But which French values? The freedom of women to dress as they please? Religious tolerance? Multi-cultural tolerance? Freedom of speech and expression? Public safety? If you listen to and read the debates about this matter, you can see that the French are being, well, French. But we have some people who would approve of banning sombreros in Arizona, so maybe we ought to listen up.

Wherever these couple thousand pedestrian laundry bags might be offending some French sensibilities, across town there are likely a couple hundred anorexic zombies strutting down a runway in front of flashbulbs and fashionistas giving offense to women in general. Nobody is proposing to ban this ludicrous display masquerading as an “art form.” (Well, I am, but who in hell listens to me.) In fact, I’m for banning them both—the burqa and the runway. Despite the fact that I would like to see several Republican and Tea Bag women politicians permanently in full burqa, I see both the burqa and the runway as crimes against the freedom and dignity of women.

I have gone dervishly round and round with the burqa thing. It’s about cultural freedom; it’s about oppression of women; it’s about religious freedom. It’s about tolerance. It’s about freedom of speech and expression. It’s about public safety. I don’t need to elaborate these fairly obvious dimensions of the debate, except for public safety, which refers to the terrorist advantage that burqa concealment affords.

Of course, the call for prohibition comes from quarters that are historically against cultural diversity, immigration, and religions they find threatening. I realize that to say that I do not disfavor banning the burqa (as explained below) I might be considered their political ally. I am not; my reasons are not their reasons.

There are similar issues with respect to the runway, a “religious”/cultural practice that worships narcissism, is putatively about freedom of expression, but really is about a clique of flaming gay guys having fun making women look like some fantasy image they have of themselves, and is a public safety issue when you make them wear six-inch stiletto heels and walk like they are in hemorrhoidal distress. But the issues with respect to the rights and freedoms of women do not obtain in the case of the “fashion industry.”

Recognizing that there is the dilemma of banning a way of dressing—the burqa— that some women might truly prefer to wear I would not be in disfavor of banning them so long as they remain (and how can you really tell) what Muslim men require their women to wear. So long as the burqa exists in the same cultural environment that permits or requires the honor killing, maiming, and genital mutilation of women and girls, the burqa is socially suspect. You can always find (culturally conditioned, or terrified) Muslim women who will attest that they love the burqa and even clitoral excision (although perhaps not a face full of acid).

While I recognize that the banning of burqas appear to have been engendered (mostly) by Mon. Sarkozy and the French political Right, I make my case from the Left. That is, I come down, I believe sufficiently and appropriately as the governmental interventionist in this issue. I feel that it is appropriate for the public sector and the public interest to prohibit private social customs (be they religious or cultural) that inhibit or restrict the rights of the individual citizen in freedom of speech, expression, or assembly. States have done this with child labor laws, the franchise and other laws, and I find this issue in the same constitutional zone.

Now, as to the Runway.   As mentioned above, I don’t think we have quite the same issues of political and social philosophy involved here. And, in the interests of full disclosure, I must say that I have had nothing but contempt for this so-called “industry” that makes nothing of social utility for the billions that is expended on it, since my daughters started buying Elle, Mademoiselle and Vogue to look at pictures and ads designed to make them feel inadequate. So I think it is women who need to ban the runway, not the state. Women need to stand up for themselves and tell the fashion-fascist flamer-designers and the devil wears Prada bitch (oh, I’m gonna hear about that) to go sit on pointy rocks or get a real job, one that doesn’t exploit the insecurities in women to satisfy their own insecurities.

It might not be too much of a stretch to compare insecure Muslim men with insecure flamer-fashion designers, out to exercise control over women in compensation for what they cannot control in themselves. In the case if Muslim men (at least the Middle Eastern version) it is that they have been denied, for historical reasons too lengthy to go into here, political hegemony in their own lands and political life. Ruled by foreign powers since Greek and Roman eras, and tyrants, dictators and religious autocrats, and with scarcely any civil law, they have been left with their clans and families as the only social institutions over which they can express the power of their manhood. It has reached perhaps its nadir in the Taliban. [A relevant aside: I remember very well from some years ago a fellow tour guide, also named “Jimmy,” and a Nubian Egyptian, telling me as we chatted in some town along the Nile, that we Americans will rue the day that we let our women have freedom (he related that he beat his wives with regularity to let them know who was boss), and that it will be the downfall of Amrican society. And he said this before Sarah Palin became a political figure.] Of flamer self-loathing I probably don’t need to say anything (or maybe I just shouldn’t) except that the same sort of acting-out and confused identity issues extend well beyond some homosexuals and the faschion profession. Take a look at the fans at a professional; football game, or a gathering of Teabaggers.

There still is one way burqa-loving Muslim women might get to wear their preferred laundry bag fashion. They need to get some flamer-designer to put together a show of “the very latest, and hottest” burqas, made of expensive materials, and with some Italian or French label them and, of course, lest we forget, the “approval” on the appropriate magazine covers of the Vogue-bitch. (oh, I think I’m really gonna hear about this.)