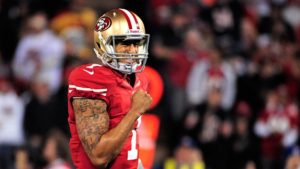 Finally, FINALLY! Somebody stood up–well sat down— to that whore to American militarism, capitalism and right-wing political values, the NFL. Colin Kaepernik remaining seated during one of the most shitty pieces of music and hymns to warfare, the National Anthem, is not just a protest against the enduring racism of this country, but also, by association to the organization that mirrors a plantation whose slaves whack their brains together to increase ownership profits and sell trucks, beer, pizza and erectile dysfunction drugs.

But before all that begins the viewer must endure the “O say can you see …” screeched out by some has been or wannabe while a field size flag is unfurled and some Iraq vet is trotted out on prosthetic limbs for the tear-jerker surprise re-union with his family. “Thank you for your service, Sgt. Suggs of Mobile Alabama. By the way, the earliest VA appointment we could get you is October 31, 2019.” Remember, this is a joint production of the NFL and the DOD– –it’s equal opportunity exploitation.

So Collin Kaepernik sits on his bench self-exiled in the wilderness from what is far more characterized by right wing touts and Trump supporters like Tom Brady, Peyton Manning, and Mike Ditka. How dare he besmirch “The greatest country on earth” moaned the usual faux patriot suck-ups and ass-kissers. How dare a highly paid professional, mixed-race athlete express his dissatisfaction with the racist behavior of his government. “Objectionable,” said Josh Earnest, spokesperson for his fellow mixed-race, but empty-scrotumed, President.

“O say can you see …”? Oh yeah, Colin and I can see fine. And from where we sit it doesn’t look like much we should stand for.

You can sit with Colin, too.

Right on Papa! I am with Colin too. Last time I checked being American allows you the freedom to speak (or in this case sit down). Perhaps that concept of freedom is lost on those “patriotic” a-holes.