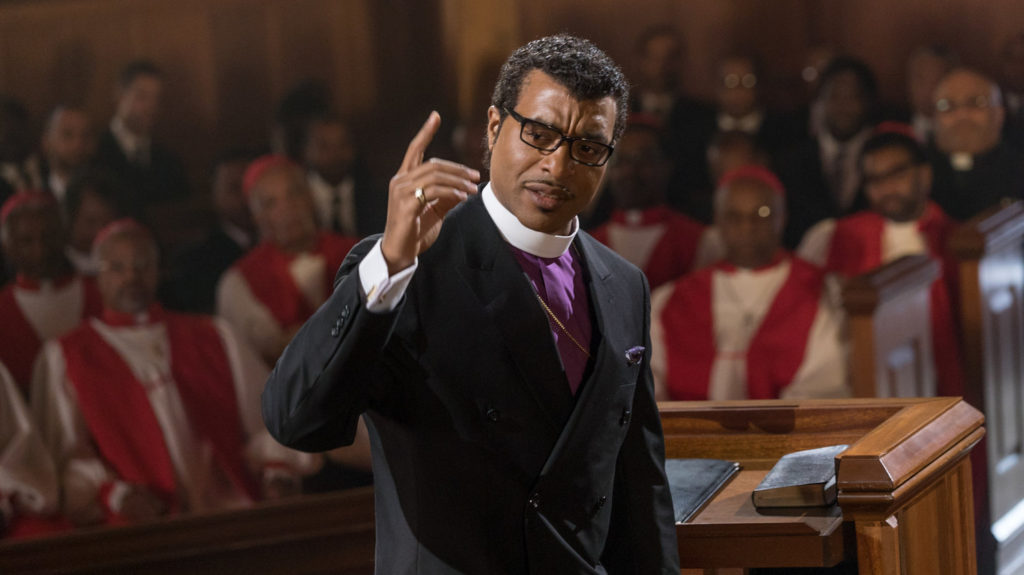 Come Sunday (20I8), opens with an inflight airplane scene which the Rev. Bishop Carlton Pearson engages a woman seatmate in conversation that leads to his apparently obsessive need to bring her to Jesus and her salvation. As I watch the scene and it reminded me of a similar encounter of my own on a flight in which I was traveling to Asia. I identified with the woman in Come Sunday, a lawyer who appeared to be under a little bit of stress, a somewhat obvious and predictable vulnerability that might be seized upon by a highly evangelistic cleric. The establishment scene really doesn’t go anywhere beyond the reverend’s ability to get to the let’s pray together phase of evangelism––the point where I injected myself mentally into her role to where I could satisfy myself with the dialogue: “Why don’t you just mind your business and go fuck yourself, you pious, arrogant prick.” Rev. Pearson was an African American Protestant Bishop, played convincingly by Chewetal Ejiofor; my seatmate on my flight had been a large Korean Christian evangelist minister who never attempted a midair salvation. Good thing; I detest evangelists.*

Beyond the metaphysical travails of Rev. Pearson that show just how stupid and brain dead evangelistic churches are, I enjoyed the simple narrative driver (apparently derived from an actual experience) that the very successful reverend actually had a critical thought.This occurs when the Rev., watching the Television news feed of tribal slaughter in Africa, he is given to wonder why his scriptural teaching is that these unsaved souls we’ll receive the additional mistreatment of eternity in Hell. Wow! This dim bulb actually made it all the way into adulthood without wondering how a putatively” all-loving and all-just God” could render eternal punishment upon people who never had the good fortune to be sitting next to him on an airplane.

That’s evangelistic Christians for you: you got to be saved, you got to accept Jesus into your heart, or you are going to hell.

That is, if there is a hell. Rev. Pearson actually has a revelation, and it’s that there could not possibly be hell under such contradictory circumstances and so he preaches that everyone will go to heaven.

What he finds out is that there is a hell, right here on earth, and it is his church, and it is full of metaphysical zombies of his own creation that are going to make his life hell. How dare he step away from chapter and verse. They turn on him like a bunch of bloodthirsty inquisitors and his church empties faster than the bleachers when the Philadelphia Eagles are down by 25 points in the first quarter. The few white members of his congregation are the first ones out the door. The Rev. might be ready to let everyone into heaven, but he gradually empties his own congregation to the point where it is no longer economically sustainable. Along the way he loses his friends, and is even ostracized by his former mentor, the Rev. Oral Roberts, and it is ejected by a conclave of hilariously-garbed Black Baptist bishops. Only his patient and long-suffering wife, the only likable person in the story Beyond the tormented gay keyboardist in his church band, stand by him.

Once again I was drawn to wondering what the hell Black people were doing adopting—often with greater fervor—the White religion that was actually used to justify their persecution and enslavement and, subsequently, their oppression under Jim Crow, and no doubt, a fair amount of the prejudice and discrimination the undergo today. WTF! Is my usual reaction when I encounter this at what I call “street level.” By street level I mean, at an empirical level that contrasts, and sometimes confounds, the manner in which I was “trained” to be an objective social scientist–to seek out bodies of data and analysis, secondary studies, and historical information—to get past the subjective and narrow WTF response to what seems outrageously contrary to human nature.

As it happened, I did have a “street level” datum, an acquaintance have a local café, a mid-40s African American veteran I will call “Cab.”  Cab falls within a category of mid 40s young men I have met at the café who, excepting for his race, fulfills the characteristics of being non-college educated, unmarried and not in stable relationships, drifting between variety of dead end jobs like waiter, bouncer, and security guard. For all of that, cab is relatively upbeat and hopeful for which I give account to his credulous nature and his attachment to the preachings of not only Black church evangelistic Baptists, but the New Agey ”if you wish it, it will happen” nonsense of the likes of Tony Robbins.  Cab claims to have a personal relationship with Jesus, who is looking out for him, and a high confidence in the “if you wish it” cosmology that obviates necessity of wasting a lot of time on things like education. In other words, there is not much for him to do other than wish and wait. He has a revelations/Rapture review of his own future.  I failed to convince him that he should take advantage of his G.I. Bill entitlements to attend college, but he seemed to have fallen prey to the blandishments of Trump (and some of his anti-immigration prejudices as well) that the magic of MAGA will produce the ignition that his Jesus/Robbins deliverance has been waiting for. That he has positive feelings for such an evident racist as Donald Trump simply added to the WTF I had about his religion.

How could this be? There was clearly no chance that I could convert Cab to something more logical, sensible, and practical, something that would give him a chance against his simply sitting there, wishing and waiting, a decade from now, his prospects even worse. He was happy and totally convinced that it all would come to pass as he believed. Part of me wanted to burst his bubble, part of me did not. I elected the second part, and really did not think much about Cab until I saw Come Sunday.

I can claim no authority on early American history or African American history, but I was strongly affected buy Eugene Genovese’s lengthy and important study of “the world the slaves made,” Roll Jordan Roll, in which the slaves on American plantations might well have made of use their adoption of the white man’s religion as both a means of accommodation, a demonstration of a certain purity and obedience, and even control.

The Black Evangelical Christian church was the establishment of African-Americans whose daily existence was the meeting out the overwhelming and brutalizing reality of white power,” Theologian James Cone, wrote in his Black Theology and Black Power:  “For the slaves, it was the sole source of personal identity and the sense of community. Though slaves had no social, economic or political ties to people, they had one humiliating factor in common–serfdom.”

The Black Christian church was an extension of slavery—a form of Stockholm Syndrome–whereby slave owners and overseers liked to dangle the idea of Christianity to slaves, indoctrinating them that a combination of accepting White Jesus, hard work and obedience would prohibit them from being slaves in heaven.  Christianity had also a lot of other good stuff like wives being obedient to their husbands and, of course a form of power and community that filled a vacuum in relations amongst blacks. Worse, it deflected many blacks from religious–ideological postures, e.g. Islam, or simply Marxist secularism, that might have made them less compliant and victimized as they seem to have become in the post-Reagan era.

Rev. Pearson does not recant his heretical-eschatological position on hell and gradually cobbles together a small congregation that will allow him to continue to spew the rest of his Evangelical bullshit.  At the end of the movie he is back in business leading his predominantly Black flock in some rousing gospel tune and accepting White Jesus into their souls—once again, but now willing spiritual slaves of the White master.

I can remember a born again kid in college cornering me and starting up. As a Jewish boy i was the proverbial mother lode for this kid…but when I asked him if my dog and house plants had souls and could get to heaven he sputtered to a stop and I made my exit.

Yes, Bob, in my book, The Babo Gospels, pets are addressed in my re4view of the book by Kurz, Gary, Cold Noses at the Pearly Gates (2016. Check it out on Amazon.com.