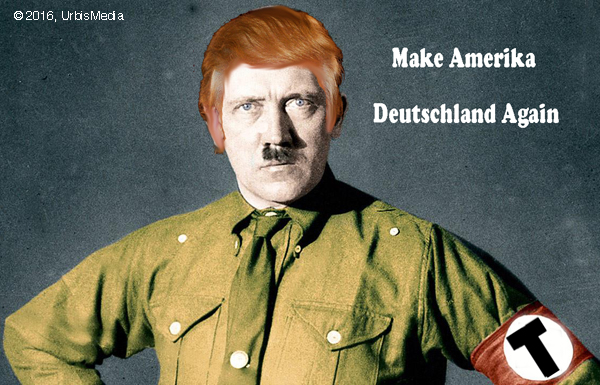 There’s that sneer, those stiff, jerky hand gestures, those self-satisfied rhetorical pauses that remind so much of those “make Deutschland great again” orations to those yoooge idolatrous assemblages in Nuremburg that deliver to my inner ear the strains of the Horst Wessel Lied.

And then there are those themes. Amerika humiliated by the Chinese, Al Qaeda, betrayed by the current leadership and its suspect birth certificate that it equivalent to the Treaty of Versailles, besieged not by Jews and communists, but Mexicans and Muslims. The need to take strong measures against those who are not true Amerikans, against those who would object to torture, family assassinations, whatever, and justifies our means and to the politically-correct speech that would obscure it expression. Amerika needs an iron-willed leader who will create a military that strikes fear in an opposing force.

Had enough? Okay, I will get to my lead before it smothers under the allusion.   We all know where things stand at this writing: there is the distinct probability that the Republican Party’s nominee for president of the United States will be Herr Donald. Pundit speculation, which is not been very reliable to this point, has it that he has such “negatives” that it is equally unlikely that he would be elected.

Hold on, I’m getting to Trumpallnacht. But first, we need to reflect upon how we got to this point. We got here because the first Amerikan Reich—the illegal “election—of George W. Bush and the virtual authoritarian that was fashioned on a foundation of lies and deceits that led to undeclared war, torture, illegal detentions (Gitmo remains) the Patriot Act and an inept Homeland Security surveillance that now wants to burrow into your iPhone. Amerika’s streets are made “safe” from unarmed Black men with militarized police forces that are immune to accountability. The Amerikan war profiteering Krupps and I.G. Farbens feed greedily on a military budget on steriods of a trillion bucks that no politician would dare gainsay (while, of course bemoaning public debt and the size of government).

So, could it happen? Pull up a bucket and think President Trump and a gold toilet seat in the john off the Oval Office. Remember, Amerika re-“elected” George W. Bush. Remember that Barack Obama didn’t have the balls to pull us out of the Middle East quagmire, and expanded surveillance and drone assassinations. Remember that our first reaction to any “attack” is to pray, usually on our way to buy a gun or more ammo.

Which gets me to Trumpallnacht (I realize that I’m not using this term in and exactly elusive manner).   What Trump needs to get elected is an attack, an event of the proportion of, say, the last Paris attacks, before election day in November. He needs a “game changer” that will wipe out all those “negatives, and that would be something with a 9-11 effect that will send Amerikans scurrying to buy flags, guns, pray and go shopping—and elect a “strong” stupid “leader” who will assuage their terror by carpet bombing any place with sand that isn’t a beach. Hey, WTF, let’s settle all scores (like the Corleone’s on Christening day), nuke Moscow to get that Snowden guy and show Putin who’s got the big ones, turn Beijing (after they give us back all our industries) and Pyongyang into parking lots, and flatten Mexico City like a tortilla for not paying for that wall. And camps, we’ll need more that Gitmo for all those media traitors who said bad things about the new Furher, and anybody who doesn’t buy a copy of Mein Kunst of the Deal.

Sure, Hillary is an “interventionist” and voted for Bush and Cheney’s war, but that socialist got her to walk that back. She “settled,” and Herr Donald never settles, it’s a sign of weakness, and a weak Amerika is not a great Amerika.

Well, maybe you think that overdoes it a bit. But there is precedent, just eight decades ago in Europe. We Amerikans liked to say “it can’t happen here,” believing in our exceptionality. But we never counted on how easily we have been terrorized. We never understood how little it would take for a demagogue to mobilize a mob of ignorant, frightened, angry bigots into political movement of proto-fascism as our media kept repeating “it can’t happen here.”

This from Ladbrokes… unless we get that attach, Ladbroke has a good record.

Opps attach=attack. Lucky i’m not in your seminar…

I kind of guessed at the typo. I do miss those seminars.