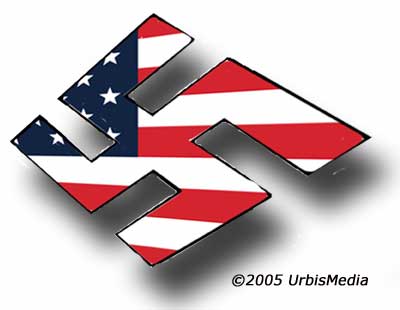 Almost the sure sign that our own democracy is in peril is the political drum beat that we must bring democracy to the rest of the world.   This political evangelism is our mission, which we must pursue with a religious fervor to convert those political heathens of the Middle East.

George Bush took his new mantra on the road, to Europe, presumably to mend the huge rift he caused between his administration and Europeans.   As never before, the people of Europe detest this American president and his policies – not America, mind you – but George Bush.   More can be said of that later, but for the moment, the mantra: Bush’s portrayal of himself as “Mr. Democracy,” not only because he helped bring about an Iraqi election that might result in another country under Islamic law, but because he thinks he can ram democracy down other country’s throats and they will then make common cause with the USA (you know, like those democracies of France and Germany).

But who is George Bush to posture as the high priest of democracy?   That might be called into reasonable question by the curiously un-democratic means by which he first gained his high office, and the tactics of purging voter roles and disqualifications of other voters that may well have made the difference in the recent election.   Shouldn’t Ukrainians be lecturing us about democracy?   And his was a campaign that might well have been “won” by scapegoating cohorts that only wanted their equal rights, women who want to control their own bodies and homosexuals who wish to have their unions legally-sanctioned.   Where is the democracy in that?

And where is the democracy in the use of some $97 million in government money being used to tout the administration’s policies?   Is it democratic to pay conservative columnist Armstrong Williams $240 thousand to promote “No Child Left Behind”?   Or $21thousand for columnist Maggie Gallager to pump Bush’s “Marriage Initiative.”   To use our money to produce fake “news” stories to be aired by fake “news anchors” that promote the administrations policies?   To credential “fake reporters” like “Jeff Gannon”(Guckert) to shill softball questions to Bush at the already highly-controlled press conferences?   What’s next, Nuremburg-like rallies of the faithful?

Not that there is a large chorus of voices calling such malfeasances into question.   This is perhaps because there are consequences for challenging Mr. Democracy.   Former Ambassador Joe Wilson and his CIA operative wife, Valerie Plame discovered that.   Bush continues to stonewall the investigation into her being “outed” by someone in the White House.   Reporters get shunted to the back of the room, rejected from Air Force One, or just plain ignored.   At an even more sinister level there is the disturbing statistic that of the 54 journalists killed in Iraq, 11 were killed by American troops.

So does this mean that we are sliding toward fascism?   Most of us don’t feel much of it unless we piss off some airport security person.   But then most “good Germans” didn’t feel much difference in the early years of their Reich.   If it is not too oxymoronic, it is a Friendly Fascism.

Of course, nothing brings on Friendly Fascism like that old standby, “the evil enemy” at the gates.   History has shown that all sorts of peoples are willing to surrender their democracies and much more if you really scare the beans out of them.   A tyrant who will save their butts is preferable to someone perceived as a duly-elected weakling.   And so America’s friendly fascism takes further form in the excesses of the Patriot Act II, detentions without charges, and a growing record of torture and other abuses of “suspects.”   All now administered by a political crony whose job has been to legitimize the official use of torture.

A Republican-dominated Congress has approved spending on the Iraq war of hundreds of billions of dollars, and will be asked for over $80 billion more that was conveniently left out of the budget.   They will likely comply, at the risk of “not supporting the troops.”   America’s equivalent of Krupp, Haliburton, has now been the recipient of over $96 billion of that.   Then there is the new budget and Social Security shell games, medical, and education policies, ravaged to reduce the speed of a downward-spiraling deficit.

And where is the outrage, the clamor to save our own democracy?   The legitimate press, what is left of it, is intimidated by the propaganda of being “liberal”.   The insidiousness of friendly fascism is that all it needs is the right combination of elements, fear, and a putative leader who knows how to exploit it.   When Bush recently met with Mr. Putin he deflected issues of difference by obliquely commenting that there was “more agreement than difference” between the two leaders.   Sometimes some of the truth slips out.