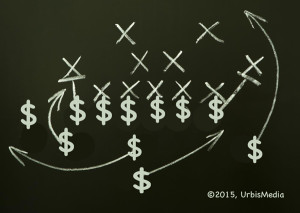 I don’t run my life according to too many rules, which might have something to do with my first rule, which is Don’t have too many rules (perhaps I do need a rule against redundancy). Actually, I have written about a couple of my rules. One is to Never ride an animal larger than myself.*  Another is a travel rule to Never pass up a clean restroom.

But here I want to talk about a rule I have obeyed since many years ago in London I lost £15 in a game of Three Card Monty. That was when I formed the rule to Never to bet on anything I can’t control. So, I might bet you that I can beat you in a basketball game of “horse,” where I know I will do my best to win; but I don ‘t bet on horse races, or on slot machines, or on any other rigged or fixed so-called “games of chance.” Those are for suckers.

What amazes me is that there are so many suckers out there. There has always been gambling, probably long ago some guy said “I bet I can start a fire rubbing two sticks together” (right after he figured it out). It used to be that you had to go somewhere to put a bet down, the bookie’s office, a casino, or perhaps the office football pool where are you filled out little slips of paper. But these days, with the Internet, the casino is everywhere, and the suckers are flocking to hugely-profitable on-line poker and the latest, “fantasy football” betting schemes. These started just a few years ago but now there are several of them and they are obviously in “league” with the National Football League, a sleazy organization that “owns” guys who spend Sundays getting brain damage for the amusement of crowds of screaming yahoos.

So, of what possible value could sports be if you couldn’t wager something on its outcome. Or outcomes, because you can get a bet down on just about anything in sports—not just the score, but who scored, or by run, or pass, how many fumbles, fumbles lost, field goals . . . or whether the third-string quarterback can start a fire by rubbing two sticks together—you get the idea. In fantasy football you put your money down and you get to pick your own fantasy team based on existing players and their performance; it gives you that fantasy feeling of being some asshole that owns his own football team. You can even fire those players next week by not choosing them if they don’t perform so that you win something back on your bet. The lure, of course, is the prospect of becoming quite rich, as the smiling shills in the television ads for these games within games announce that you “can’t win if you don’t play.” Already, it appears that the purveyors of these “games” are doubling down on their profits by placing their own bets, with the knowledge of inside information of course. If you think you’re competing against your friends, you’re kidding yourself.

In case you missed the great recession of 2008, you need to know that you might be impacted by gambling me even though you are not inclined to it.   Holding your job, keeping your home or your pension, are all subject to the “hedging,” “shorting” and other financial games concocted by bankers and Wall Street players.   And talk about being rigged—these guys never lose. But you can get to lose not just once, but twice; first when they ruin your life, and second when your wholly-owned government bails them out with your tax dollars. The “House” always wins in the end, whether the house is on Wall Street or K St.

But remember: you “you can’t win if you don’t play.” It’s always best if you can get “in” on the game. Even our venerable institutions of higher education seem to have figured that out. Take my erstwhile place of employment, San Diego State University, for example. Blurring the lines between education and public relations the questionably academic department of Tourism and Hospitality Management (endowed by a successful real estate investor who will receive an honorary doctorate this year for his beneficence) recently featured “research” conducted under the aegis of the Sycuan (Casino) Institute on Tribal Gaming (Gambling) that found that a “positive fiscal and social impact tribal gaming has had on Native American populations.” Really? And if that is the benefit what are the costs? One doubts that the Institute will pursue that question. Now all the university has to do is to create student stupid enough to believe that this sort of thing is actually objective academic research.

Gambling is fun, a form of recreation, the television commercials for casinos and for fantasy football and online poker tell us. They show us young, attractive couples in party-like settings, raking in the chips as they enjoy free food and drink in casinos or light beer and Doritos in their living rooms while brandishing their checks of winnings. No losers in those commercials, and one can maintain the fantasy that surrounds the whole apparatus of gambling there are no losers because that’s the business model. That’s what suckers are for. The long and well-known connections between gambling, organized crime, substance-abuse, and prostitution are, of course, cleansed from the cost side of the equation.

“You can’t lose if you don’t play.” You betcha, sucka.