Whew! I actually wrote that. Where was the bolt of lightening? Actually, the great avenging deity might have understood that I wasn’t calling down his omnipotent wrath upon my country, but meant something different (other than just a rhetorical device to grab a reader’s notice).

Well, if you felt a bit f discomfort with that, try this. There are a lot of people in this country who call themselves “Christians” who are some of the most despicable, disgusting, hypocritical, feculent motherfuckers that ever dragged their knuckles over Mother Earth. And I say that “with all due respect.”

What I meant is that we are a country cursed by religion. We are theopathic, to use my neologism, we are a “God sick”nation. And here’s what I mean. 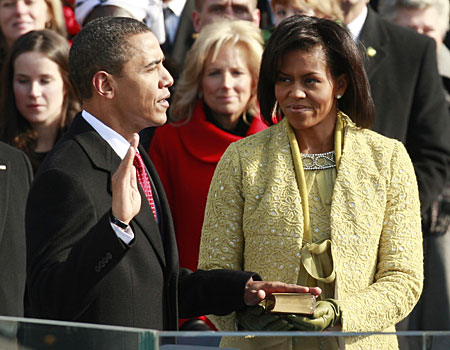 This is the President of the United States taking his oath of office to support and uphold the Constitution with his hand on a Bible. It is a scene in which it is easy to presume that the higher order document is not the Constitution, but the Bible. This is, by the way the same president who never ends a speech without the cliché “and God bless America.” This is the same president who regularly attends the Congressional “prayer breakfast,” which is also attended by several congressmen who still insist that he is a Muslim. When it comes to this sort of stuff, the reputed Kenyan-born socialist, is little more than an American “good old boy.” So . . . we have . . . this . . .the arrogant, repulsive, countenance of American religious bigotry.* 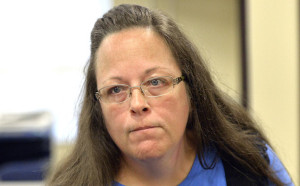 Kentucky county clerk, Kim Davis, looking as though she is about to go snuffling for truffles is some backwoods hollow, but actually wearing her best born-again religious bigot visage in refusing to issue a gay couple a marriage license. When asked, “on whose authority” she makes this refusal, her answer comes easily: “on God’s authority.” She is, of course, violating the very Constitution that she too has sworn to uphold, But where she a little more clever she might have said, “under the authority of the same Bible that the president of the United States swears he is oath of allegiance.”

Such is the chasm of ambiguity and hypocrisy that this nation is bestrides. Kim Davis Is not someone whom In alleging that she receives her instructions directly from God, could be regarded as someone suffering from a mental illness (as many other want to be martyrs of the past indeed were), bnut as someone who in the eyes of other religious zealots is regarded as heroic, someone who is willing to stand on the highest principal (or the prospect of instant fame and fortune).

Davis is, of course, one of those dimwits that alleges that the U.S. Supreme Court has now “redefined” marriage such that it will bring about the ruination “traditional marriage” between opposite sex couple. There’s a good joke for you. Traditional marriages were already failing by themselves at over fifty percent—and guess who owns a good chunk of that stat? Yup, thrice-divorced Kim Davis, the hypocrite who “on God’s authority” (the Bible) is an adulterer and should be stoned to death. (I’ll bet this phony, who is paid $80/year for essentially signing her name, had no problem signing her own divorce papers.)

Others were quick to jump up to the pulpit to make political capital on the hide of this latter day “Jean de Clerk.”

Predictably, fellow bigots jostled one another to get some camera time or chitlins from their porcine heroine, waving signs like “Kim Davis for President” and “We Ought to Obey God Rather Than Men.” outside the courthouse. Soon enough they were joined by the political zombies who feed off the empty brains of the religious cretins. Mike Huckabee got his fat ass down to Kentucky to bless the new martyr. “I thank God for Kim Davis, and I hope more Americans will stand with her.” The rest of the GOP bigots weren’t to be denied a chance to dredge America’s septic tank for votes. Bobby Jindal, Scott Walker (“You have the freedom to practice religious beliefs out there. It’s a fundamental right.”), Rand Paul and Ted Cruz, sucked up from a distance in. Cruz saying: “Today, for the first time ever, the government arrested a Christian woman for living according to her faith… I stand with Kim Davis. Unequivocally.”

The Kim Davis faux martyrdom is only the latest (not to be the last) manifestation of the perpetrator as “victim” trope of Christian jihadists who, in foisting their prayers into schoolrooms, creationism into texts, installing their ten commandments and Christmas crèches into our public buildings, and denying people their legal rights as well as any facts that do not conform to Biblical accounts of reality, consider their faith under threat by not getting their way. They scream that Muslims are intent upon terrorizing our “Christian nation” with sharia law, when it is nothing less that a Christian theocracy they would foist upon America they crave—administered by the likes of Kim Davis. In this regard they are little different in their rhetoric and tactics than other religions that are the numerical majorities in other countries; Hindus (over 80 percent in India) pull the same crap, as do Muslims in many Islamic countries, alleging that their faith is under assault from other faiths or from secularism. By posturing themselves falsely as “victims” they can therefore justify “defensive” measures that involve the forms of oppression they allege are being employed against them. In its most perverse form it is Kim Davis claiming that the law of the land would force her to disobey the law she claims to hear from her god.

Elsewhere I have speculated that religious belief is a form of mental illness—a delusion concocted out of fear of the unknown and of a descent into fantasy and fairytale. Nothing seems to confirm that more than Kim Davis claiming that he was acting “on God’s authority.” And nothing damns a nation than political authority that makes the same claim.

* A survey conducted in February found that most Republicans supported officially making the United States a Christian Nation. In 2013, a poll by the First Amendment Center found that 51% of Americans erroneously believe the US was founded as a Christian nation.