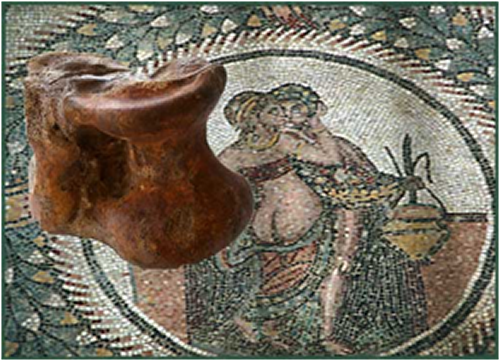 In Sicily, the Villa Romana del Casale rests in the commune of Piazza Armarina near Enna.  Like Pompeii or Herculaneum, the villa, famous for its magnificent and well-preserved mosaics, is tantalizing glimpse into prosperous Roman provincial life. While roaming about the recently excavated grounds in the vicinity of a line of Roman toilets that had attracted my attention, I chanced upon a reddish-brown item I took to be a fragment of decorative ceramic.  Smaller than my fist, it appeared to have been shaped in some vague organic form.  Piazza Armarina had been a very wealthy Roman’s villa, and contains perhaps the most spectacular mosaic-tiled baths in the Roman Empire.  My “find,” which I surreptitiously slipped into a lens case (I realize I am beginning to sound like a tomb raider here) met one of my favorite souvenir criteria—it was old, or seemed to be.

The Villa, that was the center of a huge latifundium, or agricultural estate, covering the surrounding area, was constructed on the remains of an older villa in the first quarter of the fourth century A.D. when the empire was about to split between Rome and Byzantium. Eventually, it was probably pillaged and damaged by vandals and Visigoths after the fall of Rome. Part of it was in use during the Byzantine and Arab periods but the site was abandoned in the 12th Century A.D. when it was covered by a landslide. The villa was almost entirely forgotten until the 19th Century, when pieces of mosaic and some columns were discovered. Principal archaeological excavations were begun in 1929 and various excavations have taken place as late as the 1970s.

I realize that removing archeological features from historical sites is a “no-no” this item was not immediately identifiable as ancient, and might well, given that it was also in a pile of rubble and refuse along with water bottles and food wrappers, it was probably destined for a land-fill.

When I later washed of the dirt caked on my “find” in my hotel room I discovered that it was something different than I had first assumed.  Firstly, it was not ceramic.  I discerned a porous honeycombed substructure in a chipped facet.  It had to be bone, which was also evidenced by the lightness of the object, although this one would have been that of a monster chicken.  I nearly tossed it into the trash, thinking I had just picked up an animal bone of recent origin.  But it had that reddish patina that gave it an “ancient” look.  Instead, I tossed it in the bottom of my backpack.

A few days later I took some members of my group the National Museum in Naples to see a lot of the artifacts and bodies that were exhumed from Pompeii.  I still wonder what caused me to glance at a small display case.  There they were:  smaller, and a grayish color, but the same shape, definitely some joint bone from an animal.  I copied the description card, which was in Italian.  The first word seemed to be the name for a “heel bone”; the second word was “astrolaghi.”

The museum custodian, who might have spoken some English, dismissed my request for an interpretation with an Italic shrug.  The concierge at my hotel was a bit more helpful, speculating that it might have been a bone or bones that were used to do astrological forecasts or read the auspices back in Roman times, sort of like Queequeg did in Moby Dick.  Other Italians I asked could only speculate.  The word was “astrolaghi,” not astrologi, so it may have nothing to do with astrology, or it might be a typo.

It’s a mystery.  So my souvenir could be ancient.  Romans might have rolled it on those wonderful mosaic floors to urge the Fates to disclose their futures.  But when I pick it up and hold it in my hand it instantly triggers my memories of that ancient villa in Sicily and to wonder about those long gone Romans who asked it their destinies.

I am not given to supernaturalism and spirituality.  But my ancestors the Romans certainly were.  They had an entire pantheon of gods that they had borrowed from the Greeks, Egyptians and Persian and others, deployed household gods and personal votive deities (as we might recall are carried by Maximus in the movie, Gladiator). Romans also believed in auspices.  Their legions usually carried with them a priest that would “read” entrails or conduct other prophetic rites to divine good places to establish their casta, or camps.

A lot of these practices have been carried forward into the C.E. (Christian Era) by Italians.  Statues of saints adorn churches are worshipped and supplicated, as are statues and shrines in homes.  I always enjoyed the story an Italian friend told me about his uncle who had immigrated from “the old country.”  It was actually the uncle’s wife who had a little shrine to her favorite saint in their hallway near their front door. The uncle, a man who liked to play the horses and was also a little superstitious, apparently was offering some prayers to the statue before visiting his bookie.  Whether a string of successes with this practice subsequently encouraged the uncle’s placement of a large bet with the expected benefaction of the deity can only be guessed.  But that his prayers were not answered could be deduced from the ceramic shards of the statue scattered in the street when his horse did not come in.

I can only imagine what fortunes, fates, and futures (chariot races? gladiatorial contests? Who will be the next Caesar?) were being propitiated with my astrolaghi, or even how it was deployed to do so.  Was it rolled or tossed to land this way, or that, to be “read” for its “answers”?  What fortunes did this one foretell?  And I wonder, when I look at it in my little “museum” of souvenirs from my travels, if it has retained its powers over the centuries, like some “genie” in a bottle washed up on a beach, just waiting for me to ask it some question of great moment.  Even though my metaphysics, such as they are, has no place for the arts of superstition, I have thought at times that it would not be inappropriate to give my astrolaghi a little roll on the floor and asking it when I will return to my ancestral land, my favorite country, my Italia.