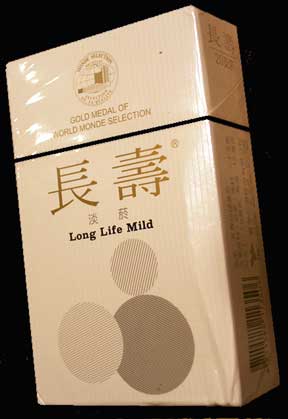 Reputedly chain-smoked by Deng Xiaoping, who died at age 93 The character on the right is “Longevity” ©2005 UrbisMedia

Why did I do it!?   After many abstemious years and I light-up like country singer who just lost his truck and his girl.   Why!?   I knew if I had just one, just one, Joe Camel’s hump would be back on my back.   Damn . . . damn   . . . damn fool! I scolded myself as I crumpled the pack, knowing I’d just go out and buy another one. DAMN!!!

What I had crumpled turned out to be a paperback on my nightstand.   I was relieved; it was just another cig-regrette nightmare.

That dream was a haunting reminder of years of failed attempts to kick the vexing habit of pleasure and peril. It was also a reminder that deep in the subconscious there lurks the memories of satisfying deep drags off the little white “friends” who celebrated with me why I was up, consoled me when I was down, and were there even when nobody else was.

It was my subconscious reminding me that something was missing from conversation over cappuccino, the interlude between dinner courses, and, how could one forget, apréslovemaking. It was my subconscious telling me I was having cig-regrettes. It was my subconscious offering me a fantasy in which the Surgeon General announces: “Oops, we made a mistake.   New research says ciggies pose no threat to your health.”   I dreamed that cig-regrette a few nights ago, and awoke ready to rush out an buy a carton even if the sin taxes on it are more than my house payment.

Other cig-regrettes are almost paradoxical.   Gone with my habit is the little game of provoking the fates, something that is quite easier to do when one is young and “immortal.”   If the thrill of betting momentary pleasure against eternal regrets seems a bit overblown consider that such games are not played only by smokers.    That piece of cheesecake, or hunk of pate; that last drink before driving home; doubling-down on your whole rent check; that one-night “un-protected” stand; they can all do you in as quickly or cruelly as the Marlboro Man or Virginia Slim.   Smokers just need a special section to play in.

At a more conscious level is the social adjustment to being and “ex-smoker.”   I’m still trying to sort out whether I associated more with smokers because they were more interesting, adventurous, or because hazy atmosphere made them seem so.   I don’t want to lose my interesting, smoking friends because each time they offer me a cigarette my refusal will remind them of their addiction.   Or they might begin to shun me for fear of “second-handing” (shouldn’t that be “second-lunging”) me.   That qualifies as a collateral damage cig-regrette.

If these adjustments to being “clean” weren’t enough, I fear becoming one of those whining health bigots, coughing and   kvetching if anybody lights up in their zip code, or refusing to sleep in a hotel room that was once smoked in.   Who wants to live longer if everybody you know shuns you like an insurance agent with flatulence?   What’s the use of good physical health if your social life is sick?   If it turns out that prolonged abstention from smoking causes self-righteousness and hypocrisy in laboratory rats that’s a big cig-regrette.

Finally, there is that mnemonic association of my smoking days with a time of innocence, a lost time before so many pleasurable things became unhealthful, when all smoking might do is “stunt your growth.”   This is the cig-regrette of wistful ignorance. And so memory holds on to, even embellishes pleasant association with cigarettes: puffing along with Bogie and Becall on a summer night at the drive in; sitting around a table half the night with French friends, drinking wine, arguing politics, and filling ashtrays to the brim; sitting back and lighting up after finishing a great book; and other occasions on which an infusion of nicotine seemed to elevate the pleasure of the moment. I suppose much of this can be re-lived smoklessly, but it doesn’t seem quite the same.

In the dreams where I am still a smoker one such memory haunts me for reasons I have yet to fathom.   Nearly sixteen years ago my wife and teen-age daughters and I were traveling in Ireland.   Arriving late on the ferry from Britain we were taking a train from Dublin in the wee hours.   We shared our compartment with a plain Irish woman in her early thirties.   She was plainly dressed in clothes that were showing signs of extended wear.   She had no wedding band on hands that showed signs of hard work, maybe “service,” maybe factory work.   She was as tired as we were, smiled a friendly smile, but quietly stared into the middle distance of what was perhaps a private dream.

I dozed for a few minutes and awoke to find her gone.   As I made my way to the rest room there she was, rocking in the space between the cars.   In fact, I was going there to sneak a cigarette, since Patty and the girls were on a crusade to get me to quit.   As I passed the young woman she was extracting a cigarette from her purse.   I quickly pulled out my hidden pack of a far superior brand from my jacket and said, “Would you like one of mine?”   She smiled faintly and accepted one.   I lit hers and then mine, and our eyes met briefly in that flash of flame and swirl of smoke of a hundred film noir scenes.

She inhaled deeply, arching her head back.   Maybe because of her gaunt features the expression on her face reminded me of Bernini’s “St. Theresa in Ecstasy” as she relaxed into a slightly-drugged   state that seemed to ease more weariness than just that day’s.   I followed suit, enjoying the unexpressed and slightly illict bond with this stranger.

“One o’ th’ leetle playshures,” she lilted in a slightly cigarette-rasped brogue.   It seemed a reference to a brief moment of narcosis in an otherwise hard and unfulfilled life. We shared perfunctory pleasantries and cigarettes and she disembarked at the next station.

It still puzzles me that my subconscious seems compelled to drag out that particular snippit of experience for me to review every so often.   Maybe it wants me to wonder how that Irish woman is these days, or there is some other, recondite, purpose I’ve yet to figure out.   But I think my subconscious has bigger cig-regrettes than I do, and it’s using its dreamworks to dredge up some old memories as a pretext to sneak a smoke.

The cig-regrette dream returns with less frequency as the sober years pass, but I think that my subconscious will always be a smoker.   Still, of all the kinds of regrets one can have in life, cig-regrettes are among the less painful, even in my dreams.