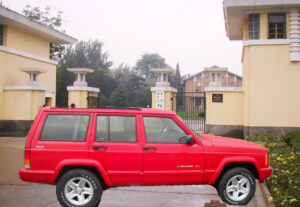 Or, how I (accidentally) prevented the People’s Republic of China from ripping off my “intellectual property”.

We all know that among the complaints that the US likes to lodge against the People’s Republic of China is of their “unfair” practice of requiring a surrender of intellectual property as part of their joint-venture agreements with US corporations. By the time I was approached by an administrator of the California state university system who was representing some auspices is in the People’s Republic of China I had invested myself of all the fortune 500 companies I owned. Show I was just a lonely university professor when I was asked 2001 if I would be willing to give a series of lectures ask for high ranking educational institutions in Beijing. I have been living in China after finishing a year as a Fulbright scholar in Hong Kong, so what sounded like a fun thing to do.

However, China was looking for somebody to deliver lectures on American public administration (Mêiguórén Gönggòngxíngzheng), which is not my academic field, although closely related to my specialties in urbanism and city planning. But I figured that I knew enough about American PA, and the Chinese probably knew nothing, that I could get away with it. I accepted the gig and decided that I would take a narrative approach to the lectures. I had found in teaching foreign students in other countries that and betting teaching points in stories both kept their attention and help them to remember them.

My dilemma was that I did not believe there was much in American public administration, which is based on American constitutional and legal principles, that was relevant to China, which is based on a single party autocratic political system. Of course, I did not intend to state that openly and clearly to my audiences. Rather, I would formulate my narratives in such a manner that, taken together, any intelligent person would ultimately arrive at that conclusion.  My audiences would be composed of China’s top-tier students from Beijing’s Tsinghua University, its top engineering university, North China Electric Power University, the Graduate School of the Chinese Academy of Sciences, and the venerable Beida, or Peking University.

I will not repeat those lectures here excepted give the reader an idea of my approach in the first story with which I began my lecture at each university. I would tell them how I was picked up at the residence where I was staying by my handler and the driver of a new, red, Jeep Cherokee. I remarked that the Jeep was it identical to one that could be found in the United States, right down to the warning lights in English. I remarked that I learned this jeep was produced in a Chinese factory outside of Beijing and that the production plans for the vehicle must’ve been provided from America and that the Chinese had duplicated it right down to its finest detail. I then posited that, if China could duplicate so masterfully an American automobile, could it possibly do the same with the American public administration. I then said that I would tell them four case studies or anecdotes that I felt demonstrated issues, problems, and complexities of American governance, and they could make up their own minds.

That was my approach. I had no handouts, slideshows or videos, but spoke only from a few pages of notes I made in a Chinese version of the American examination blue book. I basically repeated the same lecture at each university by way of sequential translation from expert student translators, and got many interesting questions. The lecture halls were packed, and I was besieged afterword by students handing me their calling cards and requesting assistance getting into graduate programs in America.

I titled my four stories as follows, with their teaching points:

“Streets of gold”: the Chinese love gold, so that will get their attention. But the story– –in which are used an internal story of my grandfather arriving in New York City—was really about America being a nation of immigrants, in contrast with China, and what its governing implications were, such is the emergence of the political boss system.

“John Jacob Astor”: I used Astor as an example not only of the ownership of private property, something uncommon in China but also as an example of how it intersected with government in America, as it did in many cases to produce billionaires.

“Burn the flag”: this one always got them because I would tell him how I myself had once burnt an American flag in protest, and that flag-burning was not illegal. I would then ask them if they could burn the People’s Republic of China flag. This story was all about the first amendment and its implications. Then, if their presuppositions were not fully scrambled, I would add the story of “the cross on the mountain,” using the example of San Diego and raising the issue of the separation of church and state. Then, for good measure, I would throw in the example of “the sex club” and land-use zoning, from a study that I had personally done, as a further first amendment conundrum (nude dancing is a form of “free speech).

“My first job” was a story of my first job interview after receiving my masters in city planning. It was a story about how I was supposed to be competing on the basis of an objective exam on my qualifications, but it turned out that my getting the job was really based on my willingness to join the political party in power. This was a way of comparing and contrasting the roles of political parties (or party) in the US and People’s Republic of China.

Judging by the questions I received from students I felt that the lectures had gone over quite well and that my points have been made, if in an indirect manner.

A couple of months later when I was back at my campus and the Chinese professor—I will call her “Professor Chan”—who was the liaison between the CSU system and the auspices in the People’s Republic of China, contacted me to come by her office and debrief her on my experience. I felt pretty good about the experience because my lectures seemed to have gone over well, had evoked some interesting questions and, beyond the usual courtesies, elicited positive comments and applause.  I had the thought that perhaps I would be approached about an encore performance at some other universities.

So, I was surprised when, after I had expressed my assessment, that Professor Chan indicated to me that the PRC“educational authorities” were “disappointed.” I had not knowingly met any educational authorities, although some might have been present at my lectures.  The thought occurred to me that perhaps that public official I conversed with at the luncheon, Mr. Xu, might have been sounding me out for my political correctness. But when I asked for specifics that she was very vague, saying only that they had expected “more substantial results.” I felt like telling her that I have been a Visiting Professor at the University of Paris and was invited back a decade later.

“Substantial results”? What the hell did that mean? Was China supposed to adopt the U.S. Constitution?  What could possibly be the substantial results they were expecting from something like lectures on American PA to a few hundred students? I was perfunctorily thanked, handed my check, and sent on my way wondering about “inscrutable” Chinese. I realized as I left that I had inadvertently done the ultimate Chinese harm to Prof. Chan; I had caused her to lose face. She had chosen me, and I had made her look bad.

It was not until a few weeks later when I was approached by a colleague in my department, a professor of public administration, who questioned me about my experience because he had been approached by Professor Chan to “give some lectures on American public administration at some universities in Shanghai,” that I think I got an answer to my question.   When he informed me that Professor Chan had instructed him to prepare “full outlines and transcripts of his lectures,” and a “complete bibliography of essential references,” that I recalled the several times that Mr. Wen had asked me if I had outlines for transcripts of my lectures.  Each time I would show him my thin little student’s exam booklet in which I had written a few pages of spare notes on the topics of my lectures. “I never read material to my students, and I expect them to make outlines of my lectures from listening to them,” I told Mr. Wen.  I said he could photocopy the pages from my notebook if he wished, but he looked at the scribbles and declined since they were all but meaningless to anyone but me.

But now I understood. I was supposed to be the “Jeep Cherokee” of American PA. The “results” they were expecting from my lecture tour was a complete course in American Public Administration with outlines, transcripts, syllabi and bibliographies. Presumably, once the Chinese had these—my intellectual property—in hand, there would be no further need for us, they could build their own course in American PA from our blueprints. Just like a jeep. But not only had I not provided them with the blueprints, but, in my view, I had given them lectures that demonstrated that American public administration is definitely not a jeep. American Public Administration in China would be like a jeep with three wheels, no breaks, and a horn that turned on the windshield wipers. Now those are “substantial results.”*

*I feel obliged to append a note that a few years later I was invited to give a series of lectures on American city planning to professors at Beijing City University, that was a quite different experience—pleasant, and non-exploitative.

Great article Dr. Jim! I have a good friend who has lived and worked in China and has a wife from Shanghai. What you write is very consistent with his experiences and observations. It is also refreshing to actually read something today that doesn’t mention president Mushroom Head?

Follow-up to my previous comment: I sent my friend the article, which he was in total agreement with. He showed it to his Chinese wife, who, “Doesn’t believe a word of it.” Maybe the Asian version of a Dump voter, but without the Mushroom part? – but, then again, when you’ve been “Ordained by God to be the president…” what else is there left to say. Bigly greetings to all?

I don’t blame her. Chinese women aren’t interested in your intellectual property; however . . .