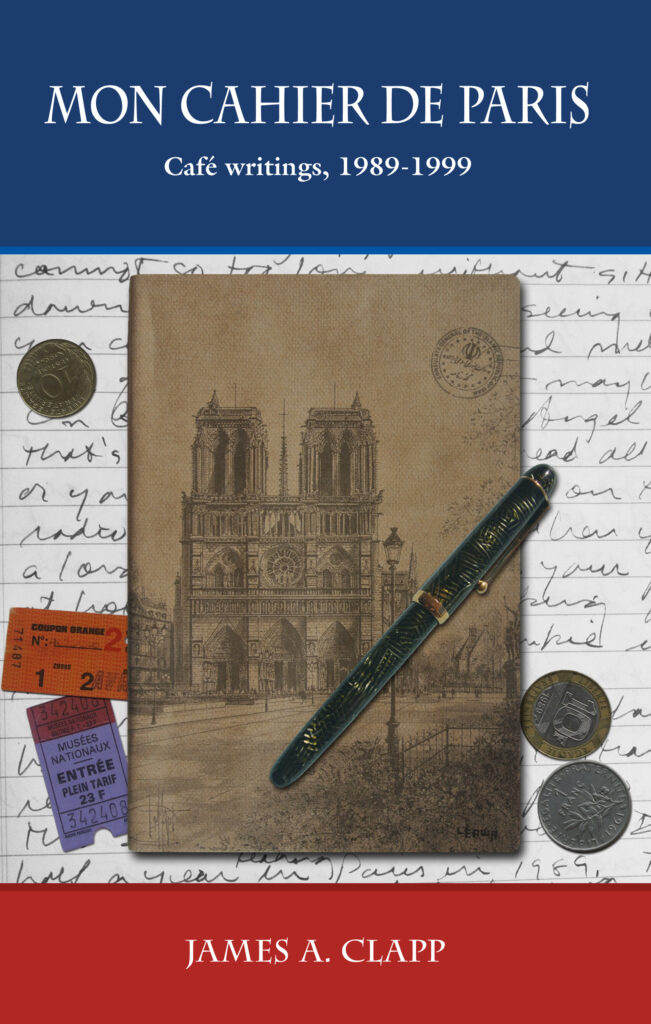 There have been several Quasimodos, even a cute Disney animated version. The best known were played by Lon Chaney Charles Laughton, Anthony Quinn, and Anthony Hopkins. The movie lore is that Chaney messed up his body contorting it with straps.  But my favorite is Laughton’s 1939 version, who I always thought looked a bit like the hunchback of Notre Dame without much assistance from the make-up department. I also liked the way he spoke his garbled dialogue to Esmeralda (Maureen O’Hara) through his distorted mouth.

As Patty took a photo of me beside a stone gargoyle and one of the bell towers on a gray and misty Summer morning in the middle of the 1970s I did my best impression of Laughton’s hunchback, reaching out to the gargoyle.  Patty ignored my movie impressions and admonished me for my somewhat blasphemous behavior. For all of its fame and glory, its connections with saints and sinners and historical events over the ages, Notre Dame was for me for mostly the setting for Victor Hugo’s novel, and a Hollywood movie set (constructed in Encino, California).

It was a few years later that Notre Dame figured it again in our relationship.  I wrote about it in a chapter in Paris memoir, Mon Cahier de Paris.

Patty and I had traveled together for several years, sometimes on questionable modes of conveyance.  Before another trip in 1980 we decided that, having two daughters, it would be a good idea to prepare a will.  We secured the services of an attorney.  When we got to the end of the rather grim process of deciding who gets what, etc., the lawyer inquired about any wishes we might have pertaining to, in his words, the “disposition” or our “remains.”  Other euphemisms such as “pre-decease” brought to mind Waugh’s satirical The Loved One.

We smiled at each other nervously, and while I had no doubt that I would “pre-decease” my wife, I was taken aback when she ‘pre-responded’ me by looking me directly in the eye and announcing: “I want you to take my ashes to Paris and release them into the wind from one of the towers of Notre Dame.”

Patty loved Paris passionately, so I had to consider that she wasn’t joking.  She said it with such conviction.

“Why not?” she said calmly.

“Because you’re Catholic, that’s why.”

The lawyer, a rather formal sort, looked a little puzzled at this exchange.

“I mean. . . the ashes . . . cremation, you know, the Church doesn’t allow it, does it?”  I insisted, realizing that this was coming out of a mouth that hadn’t had a eucharistic wafer in it for nearly twenty years, and a mind that had ignored any changes in Roman Catholic liturgy and dogma.

She was right; neither of us had taken the Church’s views on much of anything into account for years.  Why now?  Moreover, I was now beginning to believe that she had thought about the matter before this, and it was her “remains” that were being “disposed.”

The lawyer interjected: “there might be an ordinance prohibiting releasing ashes from a public building, and . . .”

Patty shifted her gaze from me to him under her signature slow blink.  The lawyer just let the last of his legalistic thought drift away.

“There, it’s settled then?  The lawyer asked, reaching for the papers.  He was getting a flat rate for the will, not “billable hours.”

It didn’t feel all that settled to me, but in a few minutes we were off, very much alive with the anticipation of travel, to pick up our air tickets.  We kidded about it getting on the elevator:  “Please, you pre-elevate first.  “No, you may pre-descend me.”  That grim stuff was all way in the future.

My memory of that exchange brought tears to my eyes on another misty Paris morning as I was being driven past Notre Dame four years after Patty has been interred in a cemetery beneath the landing approach to San Diego airport.  I was arriving to teach as a visiting professor at the University of Paris, and her forgetful Quasimodo had failed to fulfill her request to release her ashes to flutter out over the Ile de la Cité, the Seine and the city she loved.

So, I have my own bittersweet memory of Notre Dame that I attempted to atone for. Despite my irreligiosity, in many subsequent visits I never failed to light a candle to my lady of Paris.

In that year of teaching at the University of Paris, and again in 1999, I took to spending afternoons reading and writing on a bench on the Square Jean XXIII. It is a little park at the west end of the Ile de la Cité in Paris behind the apse of Notre Dame between the Cathedral and the bridge leading over from the left bank called Quai De L’Arch. It is a lovely spot to bring a sandwich a book, something I did often when I was living in Paris. I also would bring my notebook and would smile at the notion, sitting on a bench beside Notre Dame, that I was making notes ex cathedra, a curious thought for someone who considered the beautiful and inspirational edifice before me was constructed on a foundation of fairytales. But very few fairytales, it must be admitted, are commemorated as one of the world’s greatest works of art.

“The lawyer interjected: “there might be an ordinance prohibiting releasing ashes from a public building, and . . .”

Patty shifted her gaze from me to him under her signature slow blink. The lawyer just let the last of his legalistic thought drift away.”

Jim,
Thanks for sharing that story. Love hearing about my friend Patty.

So glad you did. I received communications from many others who loved her.