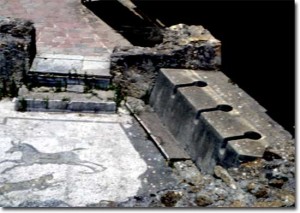 I can still hear Sal’s hoarse voice as we stood side by side at urinals at a rest stop on the Italian Autostrada: “Makeh pisshata, makeh pisshata,” he commanded.  For a moment I thought that, in his colloquialized Italian, he might be ordering me to get on with peeing.

I glanced out of the side of my eye at his greasy comb-over and through the corner of his over-tinted, thick-lensed glasses nearly a foot below me.  But Sal was looking at his twelve-year-old son on the other side of him, the object of his parental imperiousness.  “Makeh pisshata!” he demanded again, “I gonna have to pay two hundred lire so we could pee in dissa place.”  He was referring to the lady custodian who guarded the men’s room door and exacted paltry tribute from the boated bladders and dribble-pissers who filed off of tour coaches at autostrada rest stops.

Nobody cared much for Sal, not me, nor anyone in my group, not Sal’s children, and probably not Lena, Sal’s long-suffering wife. Sal was an imperious, little, pain in the ass.  He reminded me very much of the bullying pater familias in Fellini’s autobiographical Amarcord who, to the audience’s delight is interrogated by the Fascists and made to drink a whole bottle of cod liver oil that gives him uncontrollable diarrhea.  Sal had that same pencil thin mustache and Mussolini jutting chin.  Sal was pitifully unlikable.

But it was Sal’s son, Tony, who, I was certain, must have really hated Sal’s guts.  The kid took endless abuse from his father, being slapped up the back of his head for some infraction or another, called stupid, or fat, told what and what not to eat, and when to piss.

Tony was somewhat pudgy, and, at twelve, obviously on his way to being his mother’s, rather than Sal’s, size.  Lena was two inches taller, and probably twice the weight of Sal, and we all hypothesized that she could kick Sal’s ass but good anytime she desired.  So naturally, we figured that it was only a matter of time that Tony was big enough to turn his old man inside out.  That Sal couldn’t seem to project this possibility himself attested to what a jerk he was.  The rest of us enjoyed sitting around on the bus or in a café and speculating what Tony was going to do to Sal.  We were traveling through MAFIA country, and that provoked a lot of mobster-like means of dispatch in our imaginations.  We imagined Tony rigging his old man’s car with explosives, or Sal finding a horse’s head in his bed, but we were convinced Sal would “sleep with the fishes.”

Lena assuaged the harassed Tony in the typical Italian mother’s fashion—with food.  Tony ate almost without interruption and we figured that he might be large enough by the end of the trip to avenge his father’s mistreatment.

Sal and Lena also had a daughter, Philomena. “Phil” was seventeen, tall, blonde and strikingly beautiful.  She was the centerpiece that Sal and Lena were bringing back to the old country to show off to the part of the family that didn’t emigrate.  Phil was also bored to death at being dragged around Italy when she could be with her boyfriend in Newark.  She despised Sal for that, but was left alone because she could raise a foul-mouthed rage and knew that embarrassed her parents.  Phil insulated herself as best she could with Walkman earphones and her head buried in fashion magazines.

Sal also had the annoying habit of yelling directions to his kids to stand in front of monuments while he fumbled with his oversized video camera.  Her was not above telling other people on the tour to move out of frame, or to add themselves as “extras” where he felt that was appropriate.  People hoped he might fall off the back of one of the magnificent Roman amphitheaters, or that a temple column might topple in his direction.

So everybody wanted top smack Sal up the back of his head.  But, in truth, Sal proved a corollary to an axiom of travel: it is sometimes the things that go wrong that provide our best, or at least most durable, travel memories.  The Salvatore Corollary is that it is the weirdest, or even unpleasant, travel mates that we remember in greatest detail and with a “fondness” assisted by time and distance.

So I have to be grateful to Sal for providing me with a little travel memoir.  I also owe a part of that thanks to the surly custodial lady who kept the autostrada restroom reasonably clean and sat by the door to collect the pocket change of her patrons.  She must have been observing Sal berating Tony at the urinal.  When Sal dropped his two-hundred lire coin in her little dish she fished it out an threw it back at him.

I only understood the last word of her scathing putdown of Sal—“stronzo.”  It was an apt reference for Sal, a slang expletive for a part of the anatomy that is used in another facility of her restroom.