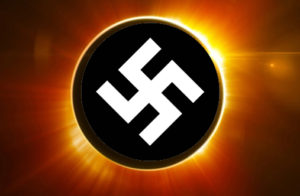 The eclipse is now history, but the thoughts it occasioned are still relevant. So here they are.

Eclipse is a facile metaphor; something gets in the way, blocks something out, obscures what’s behind. It has applications from astronomy to psychopathology. I even used to think, as a child, that the Roman Catholic Church dogma of “original sin” was like an eclipse on my little soul, blocking out its pristine whiteness until cleansed by baptismal waters. I believed, too, that a child that perished during his “soular” eclipse went to a place called “limbo” where it languished in soiled diapers for eternity. What a Church; but that’s another story.

In Charlottesville we had the temporal confluence of and the solar eclipse of the sun as it “crosses” the waist of the continental states. It is not the per se solar eclipse that is my theme today, but what strikes me as the eclipse of America’s great denial of our national original sin, our sentence to our seemingly eternal moral “limbo”—racism. Somehow the screeching divisiveness of Charlottesville that crossed over the national consciousness fully exposed the darkness that haunts—indeed, has always blotted the “soul”—of the American spirit. Racism is the original sin that the blood of hundreds of thousands of Americans in civil was would not wash away.

The election of a Black president proved too much for the racism that lurked like a toxic mold in the hearts of many. America’s racists could not abide a man of color in their White House, especially at a time when White men, feeling victimized and impotent sensed a demographic sea change from the world that was made for them, as much as it was a world made by them. And it needed a voice, a voice that would give release and validation to those withheld racial epithets and slurs constrained by “political correctness.” They got their voice.

Sure, the racist turnout in Charlottesville was relatively small, maybe around 500 or so Nazi wannabes and assorted bigoted white supremacists (compared to the 50K KKK that marched down Pennsylvania Ave in 1926). Nine percent in a new ABC News/Washington Post poll call it acceptable to hold neo-Nazi or white supremacist views, equivalent to about 22 million Americans. But remember this: Trump was elected by 63 million of these types and their sympathizers. They used to lynch Blacks for alleged rapes of White women; today White cops pull them over for “broken tail-lights” and shoot them dead, with the same impunity. To these people Black lives never mattered and never will.

The grainy black and white newsreels of those Birmingham and Selma days half a century ago were never quite eclipsed by the tentativeness of Brown vs The Board of Education and the Voting and Housing acts of the mid 60s. The ugliness of white supremacy that came over with Columbus and formed the validation for native extermination and imported slavery are still alive and virulent in the hearts and minds of many Americans.

Many of the most strident and vociferous are the of the White male non-college educated cohort that Trump courts with his racist dog whistle. Now outnumbered among university students by females, seeing their jobs taken by them (women are proving they can do a lot of what was called “men’s work” and, in some respects, better suited to some forms of “urban work”), and outlived by them as well, their formerly exclusive occupational domains assaulted by affirmative action, and their political clout contaminated by immigration and anti-miscegenation legislation, the American White Male has become a besieged demographic lump that both justly and unjustly has been called to account for a lot of what’s wrong with American political, economic and social life. “White male bashing” it has been called and they won’t get much sympathy from women or males of color over whom they have lorded it for centuries.

White males are certainly not extinct yet—they’re still in the driver’s seat in most areas of American life—but for Mr. Average White Guy their profile appears to be shrinking. At least if we take the cues of reality television. So white males have retreated to where no woman (of any color) would dare to tread, at least without permission. Where is that you might ask? The swamp, the treacherous seas of the crab fishery, the ice roads and remote frozen reaches of Alaska, the dangerous forests where men with axes fell giant trees, anywhere where there are gators, sharks, bears, poisonous snakes, anywhere where (often a toothless, cognitively compromised, superannuated) Man can demonstrate with that lethal combination of arrogance and stupidity that He still has the testosterone to lord it over something, anything that is usually part of Mother Nature. For each of these anachronistic, sometimes primitive male-dominated activities there is a reality-cable television program in which guys can be guys, smoking, swearing, spitting, acting fearless, stupid and, of course, competitive in Mountain Men, Axe Men, Life Below Zero, Most Dangerous Catch, Gator Boys, Swamp People, Ice Road Truckers. There are also a host of related shows such as God, Guns and Cars, Top Shot, River Monsters, and others, as long as there are guns, boats, trucks, planes, and dangerous animals and perilous circumstances where white guys can show that they have balls. Toss in several shows that are concerned with “prepping” for apocalyptic scenarios or governmental takeovers in which Men again get to reassert their role as family protector and guardian of the “American way of life” and you get a picture of identity/racial desperation gone viral.

But the atavistic road to resurgent white manhood is not enough. There are scores to settle from historical injuries, “enemies” to be excoriated, scapegoats to be persecuted. Supremacy has is privileges. To overshadow our racism has come an elaborate and false narrative constructed on a pedestal of American exceptionality—the great nation, ordained by the White Christian God to be history’s great exemplar (and enforcer) of equality and democracy. We are presumably not that nation that surreptitiously, but effectively committed genocide on its native peoples, and imported enslaved human beings that it forced into servitude and maintained like barnyard animals, and that its fractured conscience forced into a civil war of over 600,000 deaths merely to achieve emancipation—not to eradicate racism. No, racism remained firmly entrenched in the bigoted breasts of many Americans. A CBS poll found that an alarming 67 percent of Republicans approved of Trump equating white supremacists with those who showed up to resist them.

Charlottesville gave me to realize and finally admit that I am disgusted by my country. It was never “great”; quite the opposite, with a few redemptive moments.   The whole idea that it has lost its “greatness” and must now retrieve it by returning to male-centered white supremacists oppressing minorities and women, to reversing the halting, inadequate steps towards the notion that “all men are created equal” only adds to the embarrassment I feel whenever I have to present my US Passport abroad and fuels my contempt for our bullying foreign policy.

Eclipse. Now I am given to wonder whether that remarkable night in Chicago’s Grant Park, when the Obamas took the stage in victory, and it seemed that we had breached that long divide, that Barack would be the Black Pontifex between the races, whether this was just another eclipse that obscured the seething residual racism that lay just beneath that tenuous surface. Some of us believed our long wish had been fulfilled. Unfortunately, Obama himself, a man apparently obsessed with being accepted and liked, should have known better from the start and was treated more like a “Whitehouseboy” than a President. The racists just said “no” to everything and, other than the endangered health program that bears his name, there is little left of his unremarkable “legacy.” Obama was a weak leader and his insufficient attention to his own legislators while trying to make nice with the racists who stifled and even insulted him, left his Party weak as well. Obama was an eclipse.

What Obama did accomplish, if only by his presence in the White House, was to stir up the somewhat dormant racism that has always been present in our nation. The attacks (Trump’s birtherism, for example, the Keynian-Muslim meme) awakened us from the false dream that America had finally conquered its racist past with his election. The dream turned to nightmare with Trump, the personality through which all the ugly, hateful, white supremacy underbelly of the “great” nation coalesced and found expression. Finally, America has a true face to show the world, and it is White (well, sort of orange-white).

One more eclipse—the eclipse of truth. Just how the media became entrapped in the crucible of false equivocation may now be lost in the fog of false equivalency. Despite the ludicrous insistence by Trump’s dim-witted spokesperson Kellyanne Conway on national television that there can be more than one version of “the facts,” media, from commercial television to NPR, timidly feel compelled to lend credence to such nonsense by allotting equal exposure to stupid theories and outright lies. Mostly, this is an accommodation to the political right. That stuff about the watchdog “fourth estate” function of the media now seems laughably anachronistic such that erstwhile paragons of media like The New York Times are an insult to wrap fish guts in—to the fish guts. Perhaps there is no greater indication of the level of self-destruction that corporate media has sunk to than to watch Trump at one of his rallies (slavishly covered by the media) in which he denigrates and insults the very media without which he would still be a sleazy New York real estate developer between bankruptcies. Instead, her media have been complicit in the Trump ascendency to the White House, from which he now provides them their daily script for what has become a national reality show by way of his Twitter account.

See also, in these pages, on the subject of (white) God’s little joke of making people of different pigmentation, 27.4: Swarthy Guy in a Polychrome World, and 52.8: On Being White (about Asian women’s obsession with “bleachieness.”)

One of your best comments. If only understanding could make it better. We live in an era when knowing means nothing. The others are in charge. Depressing.