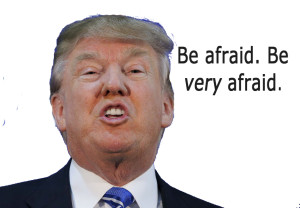 There is a perverse logic that afflicts our land of cowards. That’s right, I just called America, self-anointed universal Messiah of democracy, and self-described “home of the brave, a “land of cowards.” Blasphemy. You just don’t say shit like that in the good ole US of A. Oh, sure, I remember that we helped save the world from having to speak German and eating sushi. It took some brave Americans to do that. But it seems that since then we have become “lily-livered” and spineless. (Maybe it has something to do with not having won a war since WWII.)

In have a few other hypotheses on what got us to this point, but first an outright example: the cop that killed Lacquan McDonald in a Chicago street, the cop that alleges that he—and this has become the boilerplate defense in numerous similar instances of police shootings—“feared for his life” and therefore was justified in pumping sixteen bullets into a sixteen year old Black kid carrying only a knife, who never got within sixteen feet of the cop and was moving away! It’s all there on video if you can’t take my word for it. One of our brave men in blue was terrified by a kid. Elsewhere another cop felt threatened by a man with a pen in his hand and unloaded his weapon into him to prove the sword can be mightier than the pen. Officer Krupke now only feels safe confronting the public if he arrives in force, is outfitted like he is going to war in Iraq, and arrives in a tank. Cops are even afraid of those pesky citizens brandishing cell phone cameras, lest they “interfere” with their ability to “protect and serve.”* What are they afraid of?

I could go on but it would take days, and at the rate these incidents of cowardice occur I would still end up behind. The question is: why are our (ahem) “protectors” are scared shitless by the people they are supposed to be protecting? Well, for one, they seem to be so spooked by any swarthy or alien appearing person, which has made our police forces come to regard our communities as places threatened by some sort of cultural and racial DNA insurgency that threatens (White) America. The cowardly thing to do when threatened by a knife, pen or camera is to shoot first and let the legal system exonerate them and the media hype the mantra that “cops have a difficult and dangerous job.” It’s just a “few bad apples” the media also likes to add, but the issue isn’t really that, but is systemic when a dozen other cops can stand around and do nothing while a “bad apple” does his thing and the law enforcement associations reflexively defend their “band of brothers.”

Then again, the cops do have plenty to fear from the people they are supposed to protect—because the people are so frightened they feel they have to protect themselves such that only being armed and ready to kill their neighbors or themselves will give them any peace. The only antidote to a bad man with a gun, they like to say, is a good man with a gun; except the “good men” never seem to be around with their guns when the bad guys are slaughtering people. The irony is that Americans rush out to purchase more guns with every mass shooting in order to make themselves safer, when the effect is the opposite. Over 30 thousand gun deaths each year seems to have no discernable effect on their capacity to reason. Fire a round off in a Texas shopping mall and one might set off a chaotic chain reaction among the concealed and open gun carriers that could become the slaughter of the innocents. Maybe the NRA slogan that “guns don’t kill people” is right. Cowardly Americans with guns kill people, a lot of people.**

Maybe the problem also is that Americans seem to make distinctions between the “bad guys.” A nice white American shooting up a theater or a kindergarten, or a Planned Parenthood clinic, or brandishing weapons to protect Cliven Bundy*** from paying his taxes, does not count as “threatening” as one of Donald Trump’s alleged “Mexican rapists” or Muslim jihadis.

And here we come to the most recent addition to the paradox of Armed and dangerous cowardly Americans—Post 9-11 Terror Syndrome, cravenly exploited by right wing politicians. Fear can be a great political motivator as well as a boon to the market for firearms. Who cold have known—perhaps Osama did, and now ISIS knows as well—what a bunch of weenies Americans would turn out t be if they were actually attacked where they live. It was relatively easy for them to send their troops abroad to put their boots down on somebody else’s ground, but it’s quite another matter when their “homeland” is attacked.

Firstly, American’s regard being attacked as being totally justified, if not inexplicable. It is as if the peoples of Iraq, Afghanistan and Pakistan, among other countries would not be pissed off enough to want to get even. Not that the deaths of swarthy believers in another religion count as much as American live. So, while a whole branch of our politics supports continuing to kill more of them—Trump supports increased bombing and killing families; Cruz advocates “carpet bombing” which, when reminded that would kill innocent people, he was unfazed—our national arrogance can find no justification for attacks against Americans.

So the political rhetoric of the Right is built almost entirely on stoking fear of attacks, a la the Paris and San Bernardino attacks. Indeed, since those events “security” has jumped ahead of job creation as the primary concern of the American electorate (Oh, how easily they are swayed), no doubt much to the glee of Republican candidates. Never mind that an American is less likely to be killed by a terrorist than being hit by an asteroid; one is far more likely to be killed by a fellow American, and certainly by a family member. Of course, if you are a young Black male, you have a very high probability of being gunned down by your own police. And never mind that recent research at Princeton has discovered that the mortality rate for unemployed white American males with less than a college education—probably the predominant cohort that supports the likes of Trump and Cruz—is on the increase.   Apparently, buying a gun, or looking the other way when cops gun down minorities, is no better for them than tax breaks for the rich and austerity economics. Border walls and carpetbombing Iraq and Syrian towns won’t help either. But when you combine stupidity with cowardice you don’t make good choices. ****

Who was it that said “we have nothing to fear but fear itself”?

*Patrick Lynch, president of the NYC union representing police officers, complained that citizens sometimes abuse their rights, using them to torment or harass officers. Turnabout is not fair play on the streets of New York. “It escalates the tension and makes it more dangerous for everyone involved,” Lynch said. “The act of recording police starts from the belief that every officer is doing something wrong and that’s insulting to all police officers.” Gee, “doing something wrong” would never happen. Just ask Eric Garner—or check the video.

***As I write this Bundy’s son and a bunch of armed, white, right-wing “militia” are occupying public property in Oregon. If they were Black, Hispanic, or Allah-forbid, Muslims, they would probably already be dead. But these are white guys, emboldened by the wimpy response of our government to Cliven Bundy’s refusal to pay his gazing fees in Nevada.

****And those police will not be called to account. As I write this the news is broadcasting that the Cleveland grand jury returned a no indictment on the cop who killed 12-year-old Tamir Rice for brandishing a BB gun because the cop had reason to for his safety. Yup.