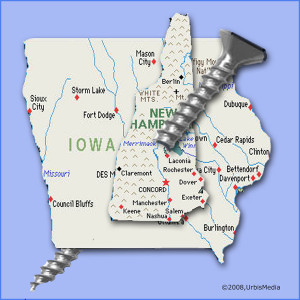 OK, that’s pretty strong language and maybe offensive to some people (who prefer to use nails). But, frankly, I am sick of Iowa and New Hampshire and their honky-white, coverall, golly-gee, American-Gothic, supposed, center of America, values. I am sick of the fact that they play this exalted position of primacy in American presidential politics. I care a little less that candidates have to go to woo 120K “Hawkeyes” and 250K Granite-head Republicans that pollsters take their surveys from, eat their middle-American food, like fried pork on a stick, and hang out at their “around the cracker barrel” stores, and kiss their fat farmer butts, so that they will hold their caucuses and give them their political blessing before they head off to South Carolina to repeat this stupid process. Everybody has to get down and folksy, so as not to offend these “kingmakers” of American politics.

Who the hell are these “Americans,” anyway? According to a Pew Research Center study:

Nine out of ten are white. Six out of ten are men. Most are over age fifty and are not college grads. Most are Protestant, and half attend religious services weekly or more. A third to half of them think humans have existed in their present form since the beginning of time. Nine out of ten think it’s more important to protect than to control gun ownership, and half of their households include gun owners. Nine out of 10 think that government is already doing too much to solve problems; that government aid to the poor does more harm than good; that blacks who can’t get ahead are responsible for their own condition; that it’s not government’s responsibility to make sure everyone has healthcare coverage. Nine out of ten never use public transit. Three out of four would vote against any official who voted to raise taxes. Three out of four think the country has gone too far to protect the environment, and they believe there’s no solid evidence that the Earth is getting warmer. Two-thirds think expanding oil and gas production should be the focus of energy policy. If this is any profile of contemporary American it best represented by your cognitively-challenged angry aged uncle sitting in a dark corner. Maybe the pollsters have not “logged” onto the reality of contemporary America, a place that is not mono and rustic, and middle, but multi-(racial, ethnic, and cultural), urban, and coastal.

Iowa and New Hampshire harken back to an America that is no more— family-farm and small town, America. These are the places where America’s “regionalist” roots are buried deep. Less that a century ago, when America’s future was being written in the grid-iron streets of its major cities, there were those who decried the onset of its metropolitan and cosmopolitan character. America was the place of the yeoman farmer and the small town burger (with Fourth of July parade and band gazebo), and there were painters and writers who celebrated these folksy characteristics even as they lay on our historical deathbed.

Soon enough the equivalent of negative campaigning kicked in as city-born-and-bred writers began to chip away at the pedestals of these erstwhile gods with snide references to the “small-minded-ness of small towns” and the rube-like characteristics of farmers. The small town has been lauded with equal hyperbole for virtues ranging from church-going habits to their being the dwelling place of the “real” America; but, as in other aspects of human affairs, vices and failings appear to be more fertile ground for humor. Thus, Elbert Hubbard could quip: “There isn’t much to be seen in a little town, but what you hear makes up for it.” Robert Quillen considered a “hick” town as “…where there is no place to go where you shouldn’t be.” (Also attributed to Alexander Woolcott.) Comedian Joey Adams picks up the theme of small town boredom: “A place where there’s nothing doing every minute,” or, “Where they buy a newspaper to verify what they heard earlier on the telephone.” Even the reputed church-going habits of small towners come in for sarcasm, according to Adams: “Where people go to church to see who didn’t.”

But the small town and rural community are no longer the relatively isolated places they were just a few decades ago. First it was the movies, that city-spawned medium, that brought visions of cities and foreign ways to the small movie houses (that, in turn, spawned films like The Last Picture Show and The Majestic), then the radio, with its music for young people (reputedly sometimes with reverse Satanic lyrics), followed by television with its niche programming. These were city technologies, and not always welcome, especially by the small town and rural gazette, and by the small town religious leaders, for whom there were an insidious and mighty competition for the hearts and minds of non-metropolitan America. Most recently has been the appearance of the most insidious of all the media of communication from the “outside world”—the Internet. No vastness of space, no wall, no porn-blocker, no barrier short of the Chinese software for shutting down websites, can forestall this most un-controlled and un-abashed niche medium.

How much of a difference have these media made is still a matter that is unsettled. Political pundits site the “givens” about the pasty-complexioned, WASP-ish valued Iowans and New Hamsters(?). But how much is to be made of the success of Barack Obama, a (half) “African-American” from Chicago with a middle name of Hussein? Is the non-isolated countryside of America becoming metropolitanized by the media to the extent that streaks of blue are seeping into their crimson past?

But then there is also the success of evangelists like Mike Huckabee, or cretins like Ben Carson in Iowa; these bible-thumpers believe that Darwin was wrong and the world was created 6000 years ago and God would never allow global warming.

It seems that frontloading the presidential political process with dominance from rural and small town states like Iowa, New Hampshire and South Carolina candidates are forced to skew their political messages to a demographic that is not representative of the country at large. Why should the folksy types and Teabaggers be at an advantage in such circumstances? Why shouldn’t candidates get to eat blintzes, drink espressos, try out their Spanish or Polish, kiss cute Asian babies, and talk about mass transit and low-income housing, in the early part of the primary process? If the early primaries are as influential as they are often made to be it may be because of the fact that they are early. If that it so, that role should go to a more representative cohort of the electorate, and a more representative presentation of the candidates, than Hawkeyes and Hamsters. They like to insist that it is part of the tradition of American politics (an inherently conservative notion). Iowa and New Hampshire might not want to give up their vaunted position. But like I said . . . ..

Damn funny while being profound.
I just came back from two week vacation in mountains of Georgia.
They are exactly the same as Iowa and NH.
I find it so funny but scary.