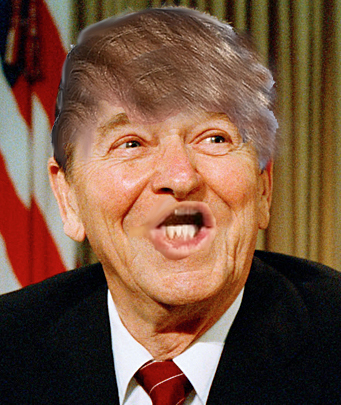 Three and half decades ago a huckster with heavily-processed hair rose up and declared he would lead the nation into a new “morning in America.” Posing himself as a Washington “outsider,” the former B-movie actor who had seen the light of conservatism declared that government wasn’t the solution to the country’s ills; it was the problem. The Ronald was dubbed “the Great Communicator.” Actually he was a sly bastard who didn’t mind criminally violating the Constitution by making arms deals with enemy states to win an election at the front end of our fucked-up Middle East adventure and the downward slide of the American middle class.

Today the mantra, from another huckster, is to “Make America great again,” another return to that nostalgic mythical “morning” (that’s twice now that I mistakenly? typed mourning) in America. Some of the conditions are similar: American was pulling out of a couple recessions in the 1970s when the Ronald was promising a retro re-set to some imagined halcyon days bracketed by V-J Day and the Kennedy inauguration; America is still in its Middle East quagmire and still not sure whose side they are supposed to be on. A lot has happened in between the Ronald and the Donald. But the line I want to take here is that a lot of the political temperament of the time of the Donald was set in motion by the Ronald.

Reagan’s “morning” was founded on a post-WWII myth that we were somehow “great” because we were victorious over those Germans and Japs (of which the Ronald played no active part). There were some great deeds and much to be proud of, but of course, we came out of it still racist, misogynistic, homophobic, and xenophobic, among some other lingering social failings. If we were going to be great we had a way (and still do) to go. It was hardly the best of times for a lot of Americans, and even Reagan could overlook the top tax rate of 91 percent and strong support of unions under Republican President Dwight Eisenhower, circumstances he set immediately to undoing.

So it wasn’t “morning in America,” but sometime in the afternoon. Morning was filled with a lot of that shameful history that involved near genocide of Native-Americans, slavery and Jim Crow, Nativism that only relaxed when the country needed cheap labor, imperialistic wars in the Caribbean and Pacific, and wildcat economics that favored the rich. By the post-WWII period things had improved, but it was hardly—except through the Hollywood-misted eyes of the Ronald—an ideal historical period to return to. But America loves its myths.

Now comes the Donald, trumpeting that America needs to regain is presumed former “greatness” buy expelling undocumented workers in the millions, building frontier walls, and bullying foreign states economically or militarily, and “registering” Muslims with his proto-fascist style and agenda. If Reagan’s signature foreign policy line was “Mr. Gorbechev, tear down that wall,” Trump’s message is “We are going to build a wall” both literally and figuratively around America. Reagan’s local bête noir was the “Caddy-driving” welfare mom; Trump’s is that Mexican with the leaf-blower. In between we have evolved the American dilemma of the poor that they are vilified if they are unemployed for taking public “handouts,” or vilified for “taking” jobs away from American workers.

What has changed in between the Ronald and the Donald is that the Ronald’s economic policies, then “voodoo” trickle-down of “Reaganomics” and other policies have been in force or influence for the past three and a half decades. The effect has been the destruction of the American middle class, the crushing of unions and workers’ rights, the deregulation of Wall Street, and corporations in the quest of unfettered capitalism. It has been a three-decade transference of wealth to the top 1 percent, aided and abetted by the corporate practice of outsourcing American employment. Toss in the George W. Bush near depression of 2008, and the flaccid response and recovery under Obama and we have the set up for the rise of the Trump.

But it is easier to blame demographics than economics; easier to see the browning of America in its neighborhoods and schools, the immigration, the different accents, clothing, and faiths, than to unravel the complexities of economic policies and legislation—easier to see the complexion of the man in the Oval Office. Out of (and assisted by) the Ronald’s administration has resurged the inveterate American ugliness of racism. Indeed, just below the surface of “making America great again” is a rightwing struggle to maintain the domination of White Americans.

Trumpism emerges in the context in which it is White Americans who feel they are now the demographic that is being discriminated against. This is total bullshit, of course, part of the new twisted reverse victimology that claims there is a “war on Christmas,” and equate abortion with Holocaust., among other rightwing nonsense. Let’s just take some recent stats about incarceration rates, for example:

Iowa has the country’s highest ratio of Black-to-white incarceration. Illinois, from available statistics, has the greatest disparity between Black people in the general population (15 percent) and Black people in the state prison population (58 percent). In fact, according to Sentencing Project calculations, all of the key Midwestern states – Illinois, Indiana, Minnesota, Michigan, Missouri, Ohio, and Wisconsin – show a higher ratio of Black-to-white incarceration than Alabama, Florida, Georgia, Louisiana or Mississippi. Across the region, Black people are incarcerated up to 13 times the rate of white people and three to five times the rate of those identified as Hispanic.

But Whites apparently are feeling put upon. One survey of nearly 3,000 adults found that “43 percent of Americans overall believe racial bigotry against whites has become a problem on par with discrimination against black people and other people of color.” Slightly over half feel that things were better in the 1950s and that things are getting worse today. Many young people feel that they will have a lower standard of living than their parents.

Then, along comes the results of the study by to Princeton economists, one of them this year’s Nobel laureate, that middle-aged, working-class White Americans are getting ill and dying at an unprecedented rate, most often by their own hands, especially those who have less than a college education. Apparently, although their circumstances are still far better than for their non-white counterparts, these white men believe and feel that they are now at the bottom of the social pecking order, they don’t like it, and the conservatives among them are ready to blame minorities, immigrants and refugees. That is the essence of the Trump appeal—disaffected, disillusioned, depressed, ignorant, White males.

The Donald’s world, and the reasons for the success he has had in the White Republican racist, xenophobic, corner of the polity to which he appeals, is a world that was begun for him by the Ronald. What goes around, comes around, sometimes even worse.

Great job on the graphic. Combines the worst features of both clowns.
I think the “demise” started with Vietnam. When I got out of the AF in 1970 and came back from 3 years in Germany, things had changed already. At least in the job market. Then inflation, then S&L scandal, then more war,war, war. I believe this last “Recession” was so severe because the average working person had little or no savings (and still doesn’t). Multiplied by millions of people and families, this could and should have represented billions of dollars, which could have maintained demand.
Ike’s nightmare is here, in spades.

I agree. The 2 recessions in the ’70s ruined things for the Carter admin, which led of course, to Ronnie and the subsequent disasters domestic and international that I sketch in my essay. You are right to invoke Ike’s caution, because now we are so tied to the economics of war, by which I mean also that we are the world’s biggest arms dealer, that it will likely be perpetual. Amazingly, the GOP candidates only want to fight fire with gasoline. If you rummage around my archives in DCJ you’ll find I have been ranting about our moral and social demise for years. jim