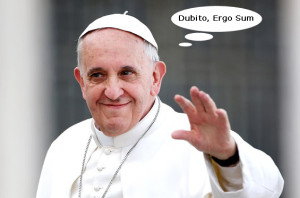 By the time he had gotten to Philadelphia and presided over the smarmy testimonials and declarations by the likes of Mark Wahlberg and a variety of anonymous Catholic couples, I had had just about enough of the visit to America of Pope Francis. I watched him sitting there with the sort of sad, pained expression on his face and wondered whether he has had enough of it, too. He still had another big outdoor mass to do “celebrate,” the same tired, tedious “magic show” built around the bloody crucifixion of Jesus Christ that the early church fathers found some bizarre way to turn into a “death victory.” “Celebrate,” typical Church double-speak.

I realize that I spent far too much time, like the media in general, being sucked in by this huge public relations event. (how many, in the huge crowds I wonder are drawn by the prospect of an assassination attempt?) I know that my reasons are different, and quite personal. First, Pope Francis looks very much like my late father in his last years; same open, and gentle, jowly face, and semi-sad eyes. My father would have loved this pope; he loved Mother Teresa, too. I know that it hurt my father when I went apostate. Secondly, this pope is a Jesuit. I am perhaps a little perversely fascinated by the Jebbies. They are a conundrum and I am both fascinated and repulsed by them. They had a lot to do with my education, and several of my most favorite teachers were Jesuits. But a good part of that education gave me the critical faculties that eventually convinced me to leave their church.

As I watched Pope Francis sitting there I begin channeling his thoughts. Jesus, I can’t wait to get on that fucking plane and get back to my little flat in Vatican City. Right now I’d give anything to be able to move my bowels, and eject that Philly cheesesteak sandwich that I wolfed down in the brief private moments when I get to have a bite to eat and take a leak. Don’t they understand what being aged celibate does to your prostate? And who is this asshole, Mark Wahlberg, out there at the microphone going on about the family in America and how it is under assault and needs to be protected? Where does America get these dimwits? Christ, I hope he doesn’t slip up and say something about how the children of American Catholic families need to be protected from my pedophile priests.

Francis looks like he’s going to keel over while some couple is at the mic going on about how their relationship is threatened by the way marriage is being re-defined, but they will rely upon Jesus to keep them joined together. I feel like I’m gonna puke; they sound like Kim Davis. It’s embarrassing, and I am glad to have been long out of this religion that is stuck in some sort of bubble filled with old guys dressed up in silly costumes. I channel back to Francis. I must’ve kissed a hundred kids today; I hope all my vaccinations are still good. They have even taken to bringing kids over to the Pope Mobile for me to kiss. I think some of these people are expecting miracles. If one of these kids were suddenly cured nobody would be more surprised than me. These people don’t realize (as I didn’t, I suppose) what a burden it can be being the Pope. All these masses, in and out of my Fiat and the Pope Mobile, taking millions of selfies, and it takes me ten minutes to get my dick out of this contraption I have to wear so I can take a leak. Then, I am supposed to be infallible—except when I say something some Catholic politician like that stronzo Jeb Bush takes exception to—then I’ve stepped over the line of “faith and morals.” Well, if you’re going to accept it when the Church says God made the world in six days, then you can accept when the Pope says humans can fuck it up in a couple hundred years. He’s dumber than his brother and as slimy as Ratzinger.

Since he brought up the matter of “infallibility,” I have to wonder whether Francis really gets how much he screwed up with the canonization of Serra. You really have to have a Jesuitical mind to parse this one out. Despite all of Francis’s concerns about poverty in the dignity of the underprivileged let’s face it, he is heir to the ugly doings of Europeans—particularly the Spanish and Portuguese—in their conquest and colonization of the America’s. And Junipero Serra was a son-of-a-bitch who was part of the Roman Catholic Church that exploited, tortured and murdered the indigenous peoples, body and soul, in the name of king and Christ, and treasure. Hasn’t Francis seen The Mission?   He’s a smart guy, he’s a Jesuit, he knows this history. So why did he stick his foot in it with this Junipero Serra canonization? Does he think the fact that these Hispanic Catholics who are descendants of those who were force-marched into the Roman Catholic Church, shouting laudamus te to their White, European “Holy Father” somehow makes that history go away? Papal infallibility, my ass.

So what have I accomplished with all of this? Already some skeptics are referring to it as a giant, expensive public relations campaign. Others have called it “theater.” If I keep plunging into crowds of the faithful and kissing babies it masks subjects like the corruption in the Curia, bishops who have escaped criminal indictment with cushy jobs in the Vatican, all the unsavory history of the Inquisition, the Crusades, the religious wars, the Church’s complicity in imperialism. Every problem I spoke of the American congress and to the U.N. the Church has shared in the culpability, but I put in the key words the faithful want to hear about abortion, gay marriage, and for the liberals, the fate of the planet. It would be easier to be a parish priest with pastoral responsibilities than running this billion member corporation with all these satin-clad sycophants and freeloaders

I was asked whether I would be able to forgive our predatory priests. Of course, I said yes I would be able to. But I have to wonder; If Christianity is a faith where everything and anything can be forgiven, then what of Justice. Is there no wrong that cannot be righted? Like that clerk woman in Kentucky who refuses marriage licenses for homosexuals, and says that she is not a hypocrite for her several marriages and adulterous affairs because she has been “washed clean” when she accepted Jesus Christ. I have already said the priests can forgive those who have had abortions, so how can I deny them forgiveness for their sins. I asked those who have been abused to forgive the church for their pain and suffering, but I keep all of this safely within the confines of the Church. so why do I have this feeling that this is not dignum et justum? If here are no metaphysical consequences then how can there be genuine moral behavior?

Chances are I’m not going to change much of this institution, it’s dogma or doctrine. I’m seventy-eight; they might kill me if I get too radical—after all none of the first thirty-three popes died a natural death—before God does me in. And all doubts will finally be answered, even those of popes; that’s what this whole religion thing is about anyway. These are dangerous thoughts and doubts. Rather Jesuitical. But before I am out of here I’d like to try another Philly cheese-steak. They’re pretty damn good; so what if I meet up with the Big Boss a couple days earlier. . . .Oh, shit, that Wahlberg asshole is up at the mic again.

Now that the theater is over we can get back to the clown show of Republican presidential politics.