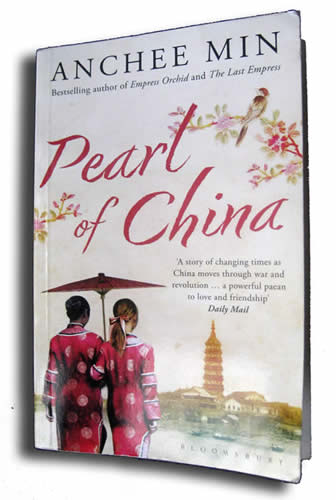 When Pearl Buck wrote The Good Earth in 1931 China was still such terra incognita to virtually all Occidentals that when casting was done for the movie version in 1936 the lead “Chinese” characters were played by a Hungarian Jew and an German actress who delivered breathy lines more like Marlena Deitrich than a peasant woman from Anhui.* Like other Western actors who portrayed Asians in those days they taped their eyes and were convincing enough to audiences who thought Charlie Chan (played by Scandinavian actor Warner Olman) was Chinese.

Buck was born in West Virginia in 1892, but almost immediately brought to China with her parents on their Presbyterian mission. She learned her fluent Mandarin Chinese and local dialects as a child. She didn’t return to the U.S. until 1911 to attend college. One wonders if James Michener based his character in Hawaii, missionary Abner Hale, on Buck’s father Abselom Sydenstricker, a lanky, rigid Christian fundamentalist who didn’t seem to mind an ascetic existence (or subjecting his family to it) if there was the faintest chance of snatching a Chinese soul for Jesus. He apparently wasn’t much of a father to Pearl and her younger sister. Pearl was closest to her mother and her amah. Despite the deprivations of a childhood in a village backwater in Ahui, Pearl grew up loving all things Chinese.

Min tells Buck’s story with the intercession of a made up Chinese childhood friend, Willow, and her father, who is an unsteady Abselom convert more interested in where his next meal is coming from than where his soul is headed. There have been several biographies of Buck and Min has apparently gleaned details that give the relationship a realism and an apt device to bring forth incidents such as when the two girls trick a highly superstitious war lord into believing if he executes Willow’s father he will incur some terrible wrath of the gods, or that Willow and Pearl especially enjoy the offerings of an itinerant peddler called the “popcorn man.”

These were turbulent times in China. The Manchu Dynasty, which had provided some central stability since the mid-17th C was on its way out with the abdication of the last emperor, Pu Yi.  The republic that followed was short-lived when founder Sun Yat-sen died and China collapsedn into a period of warring warlords.

If we can call Buck a “China hand,” a term that is usually applied to Westerners who came to know the culture, language and turbulent politics of China at a time when most of the world knew China through Charlie Chan and Fu Manchu she seemed to suffer a double discrimination. Before she became America’s first female Nobel laureate for literature few seemed to know or care about the condition of the Chinese peasant. China hands like Harold Issacs, Agnes Smedley, Edgar Snow, Theodore White, write and reported about the turbulent years from the republic to the Communist accession (See DCJ Archives 19.2 China Hands, a book review), were the only real experts on that period, yet were ignored and shunned by the U.S. government when they returned because they were “tainted” by their contact with the communists.

By some accounts Pearl Buck was should not have been a problem for the communists. While her father was a missionary she was not. The man she had married, Lossing Buck was an agronomist who worked in helping farmers increase their yields, both she a her husband had taught at Nanking University. But the new order had no use for western intellectuals whose presence might make China still appear “backward.” China shut down and became somewhat of a black hole behind which Mao proceeded to be one of the biggest fuck-ups and murderers of his own people in the history of autocracy.

Buck suffered from the same discrimination problem as the China hands, but in reverse. She, too, had to leave China when the communists were purging the country of westerners but, at least according to Min’s account, she hankered to return. That chance might have come in the early 1970’s when Buck was a world wide celebrated author and humanitarian. When Nixon went to China in 1972 Buck was supposed to go along, but a jealous Madame Mao had made the author an enemy and squelched it. She was saddened by the snub, but in retrospect, her presence would have give some luster to a meeting between a butcher like Mao and a war criminal like Henry Kissinger.

Author Min also has a history that includes Madame Mao. The first of her books I read was the autobiographical Red Azelea (1995) when Shanghainese Min, who was ensnared in the Cultural Revolution was tapped from being a farm worker to play in a propaganda movie being produced by none other than Madame Mao. But that’s another story, as compelling in its own way as Pearl Buck’s.

Pearl Buck is obviously a heroine for Anchee Min. As a Chinese and a writer she could hardly find a better one. These days there are many good Chinese writers who are producing fiction based on the common people. They are all in the debt of Pearl Buck who was the first to consider the lives of the peasants of China, long seen as unworthy of literary attention, as interesting and meaningful.

*The role was given to Louise Rainer over Chinese-American actress Anna May Wong [see DCJArchives 32. 3: ANNA MAY WONG , by Graham Russell Gao Hodges [BR] 5.11.200).  The male lead went to Paul Muni.