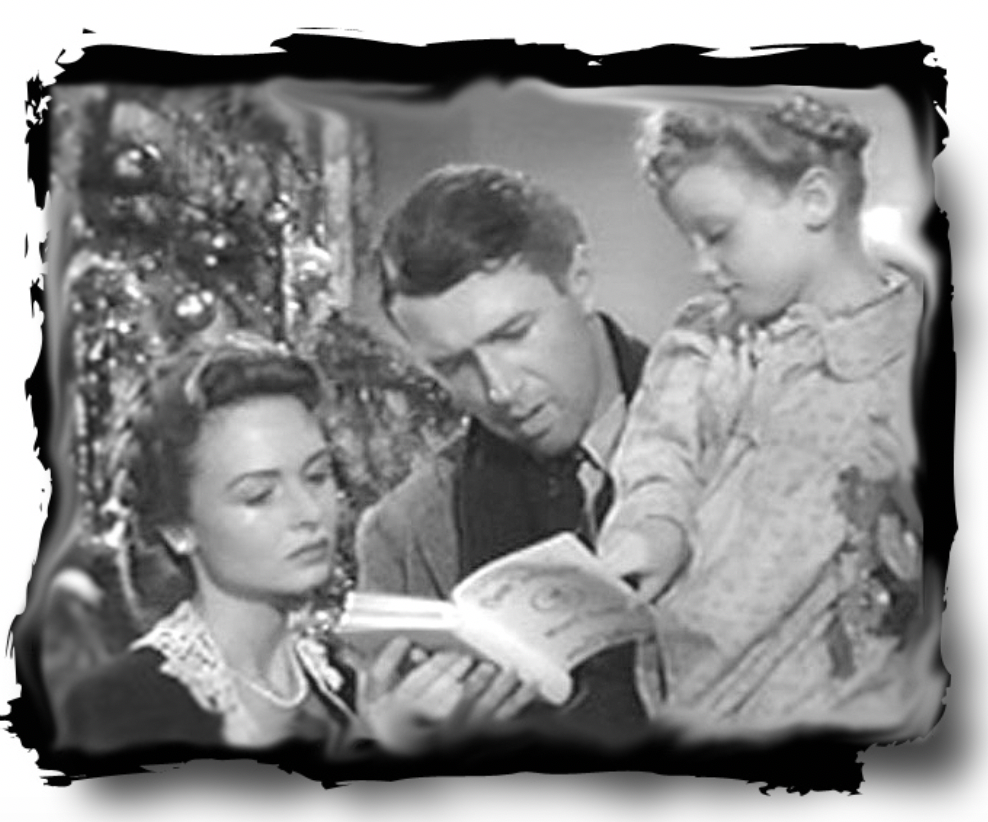 It’s that time of the year again; time for Zu-Zu’s petals.

But first, a few words on a related “seasonal” film; one that I haven’t seen three dozen times, and will not likely see.  I was waiting for Mel Gibson’s film about the birth of Jesus—The Placenta of the Christ—but it looks like I will have to hold off until Mel sobers up.1  No, I’m, referring to the timely release of a film called, just in case those dimmed kids who have gone to “intelligent design” school in Kansas can’t get it, The Nativity Story.

You have to be some kid in a madrassa in the hills of Afghanistan not to have heard the nativity story.  But Christian fundamentalists are of a mind these days that Biblical realism is the way to go in persuading themselves that the well worked-over fairytales of the good book are the literal truth.  Cecil B. DeMille used to scour the Bible for good sex that carried the imprimatur that it was ”from the Bible.”  It was a way of getting around the prudish Production Code.  But he stayed away from un-protected sex.2    My point is, why bother with this story that’s on nearly every Christmas card and church créche.   Why? Because there’s a lot better stuff out there, including my favorite, from 1946. . . bell-tinkle, bell-tinkle, bell-tinkle . . . It’s a Wonderful Life.  Right, the movie that is probably as well-known now about Christmas as the nativity story.3

OK, call me a sappy, Frank Capra sentimentalist; I can take it.4  I usually have to eat popcorn to keep from lip-synching every line of dialog from this film.  Yet, each time I see it I pick up some nuance I hadn’t previously noticed, something that makes it a little richer.  But the reason I like this movie is not that it’s just a whacking good “every-time-a-bell-rings-an angel-gets-his-wings” Christmas story; it’s a good deal more than that.

It’s a Wonderful Life appeared just after WWII, at a time when the small town was waning fast in the American experience and many of the changes discussed above were beginning to take effect.  In some sense it is the last of the truly positive small town films, and even at that, it has elements that recognize that the small town—and America–would never be quite the same.  The 1960s were not far away.

It’s a Wonderful Life is in many respects about the “common man” that Capra, an Italian immigrant, so admired in the American character. George Bailey (James Stewart) is characterized as just such a person:  honest, hardworking, unselfish, uncomplicated.  Except that George has dreams that exceed the limitations of his small town, Bedford Falls.  He yearns for travel, adventure, and to change the world for the better with noble projects.  Because of family circumstances, and surrendering his heart to Mary—yup, another Mary—the girl he marries (played by Donna Reed), George never gets to leave Bedford Falls and he accounts most of his life as a failure because he has not lived out his dreams.  George did not even get a chance to leave courtesy of the local daft board which classified him “4-F” because of the hearing loss in the ear he injured while saving his younger brother from drowning.

It is in George’s lowest moment, on Christmas Eve, when besieged by debt not of his own making, that he decides to end his life.  That decision is the premise for the film: a guardian angel shows him how many lives he has touched in a positive way, and, in the process, the small-town values of Bedford Falls would have been transmogrified by the greedy schemes of Mr. Potter (Lionel Barrymore), the insatiable and corrupt banker who harkens to the pre-converted Mr. Scrooge.5

Still, in some sense, it was the Mr. Potters of the world who would evolve into the conglomerates and multi-national corporations that, today, not only have no allegiance to small towns but also not to our national borders as well.  Eventually, Potter’s bank would swallow up smaller savings and loan associations, much as, in time, many smaller businesses of all kinds have been devoured or at least compromised by the Wal Marts and McDonald’s.

It’s a Wonderful Life mixes the small town ideal with Capra’s own version of social pluralism, especially in the sensitive way George Bailey treats immigrant families through his savings and loan bank.6  In the end, the values of good neighbors, friendship,7 and honesty win out, with divine approval into the bargain.

But the facts of the subsequent history of small-town America say differently.  The film’s fictional Bedford Falls was based on a small town in upstate New York, although it was filmed in La Crescenta, California.  In the decades immediately after World War II many such small towns in Upstate New York and elsewhere, towns whose economies were founded on products that were no longer competitive (e.g. Gloversville, which made gloves), or whose labor forces were not sufficiently diversified) were passed by when the new interstate highway system was constructed.8

It is also noteworthy that every one of the characters in this film who do, for one reason or another, leave Bedford Falls becomes at least financially successful, particularly Georges’s brother and the character Sam Wainwright (Frank Albertson).  Yet the only decadence in the small town is portrayed by its biggest and most financially successful businessman, Mr. Potter. Indeed, had Potter had his way with Bedford Falls, it would have become, as portrayed in the sequence in which George never existed, a “honky-tonk” place of bars, dance halls, casinos, and other sleazy establishments.  In “Pottersville,” Violet (Gloria Grahame), who is a pretty blonde with a slightly erotic flair, becomes a cheap dancehall girl who is being shoved into a police paddy-wagon.9

More ambivalent is the depiction of drinking in Capra’s Bedford Falls. There is a certain amount of tolerance for Uncle Billy’s dipsomania and even Mr. Gower’s “medicinal” drinking to dull the pain of the loss of his son in the war, but the Pottersville sequence shows drinking in a more socially-destructive light:  Mr. Gower is a besotted beggar, and Uncle Billy died in a mental institution from the prolonged alcoholism.

There is, then, an ambivalence that afflicts It’s A Wonderful Life: it’s “wonderful” if one submits to the blandishments of the small town ideal, but every time one of its emigrants returns or phones in there is a reminder that there is that big, wonderful, sometimes scary world beyond the borders of Bedford Falls announcing that there might be other ways and places for wonderful life.  If this movie was an encomium to the small town it was also to a rather mythic America that Capra, an immigrant who didn’t just love America because he made good there, but because he loved and believed in Americans as a people.

In this movie, we can look at some of our myths and see them for what they were.  Yet, we can also enjoy them for what they were, the representation of the ideals we set for ourselves.  Most people view this movie each Christmas season as a nostalgic diversion to a time in America that probably never was.  Movies require our “willing suspension of disbelief,” but good movies always contain the reminder that reality is just on the other side of the exit sign.  When George Bailey discovers Zu Zu’s rose petals in his pocket he knows he’s back in his reality, and we know that he’s back in our myth.

Now to see how The Nativity Story handles its mythology.

1. Sorry, Mel.  I have seen Apocalypto (which might be about the end of your career), which was visually interesting, if well within your sanguinary boundaries.  BTW, Mel, I am not Jewish, because if I were I would be looking for you to kick your ass.

2. The whole business about how Mary got knocked up is one of those ways in which the R.C. Church has stepped in dog doo. Joseph, of course, is not allowed to be the farther of the  Messiah; so who is it?  Was it that angel Gabriel who appeared to her at the Annunciation (Assignation?);  was it the Holy Ghost (who used to come regularly to clean their pool); or was it god the Father, the father Father?  Or, was this the origin of that story that she got “something off a toilet seat”?  See, what I mean?  It’s better sometimes to keep the 9thcommandment.  Since this is Keisha Castle Hughes first big role since Whale Rider, it might even be the leviathan.

3. Actually, the movie didn’t do that well atv the box office in the 1940s, but the re-run revenues since have more than made up for i

4.Although I’d rather be called this year’s winner of the Pulitzer Prize.

5.  From one of my runner-up favorite Christmas storie.

6. The character Martini, clearly an Italian immigrant in the film, bears some resemblance in stature and facial features to Frank Capra,

7. George Bailey’s friends, Ernie (Frank Faylen) the cabdriver and Bert (Ward Bond) the cop, were later used as models for the Sesame Street children’s program characters of the same names.

8. In an earlier incarnation, this writer was a planning consultant to several of these small towns.

9. Sexual behavior in the small town movie was not at the time always portrayed with the innocence of George and Mary Bailey. In Preston Sturgess’s The Miracle of Morgan’s Creek (1944) the film’s heroine, Gertrude Kockenbocker (Betty Hutton) is the uncontrollable daughter of a local policeman, who contrives to meet, marry and become pregnant by a soldier, and when she manages to achieve the third goal, cannot even remember his name.  A local boy with a crush on her then contrives to step into the role of the soldier, and thus begins the whacky antics of a vintage Preston Sturgess comedy.

“1. Sorry Mel. I will see Apocalypto(which might be about the end of your career), which sounds interesting, if well within your sanguinary boundaries. BTW, Mel, I am not Jewish, because if I were I would be looking for you to kick your ass.”

Dr.Clapp, I am willing to make you a honorary member of the tribe…as Mel does need a good ass kicking.

BTW seasons greetings, health and peace to you and your family.

Sign me up — and not just for the free bagles.

Yesterday I watched a lot of “Christmas Catholics” go to Mass at a church in the next block. I used to be one of them and before that, a confirmed Catholic.

Today I wonder how I fell for all of the Christmas story especially the virgin birth. That’s why I found your comments so appealing.

Today I wonder how so many people can believe this hogwash. The church has done a remarkable job of indoctrinating millions of people over the centuries, and all for what, money and power (and sex). Reminds me of our current president and his dogged followers so I don’t know why I should be surprised by it.

Religion is a safety net for those who aren’t able to imagine an afterlife without a god to save them (or not). Just goes to show you what a little indoctrination, beginning in the nursery can do.

All that, and it’sgood for business, too.