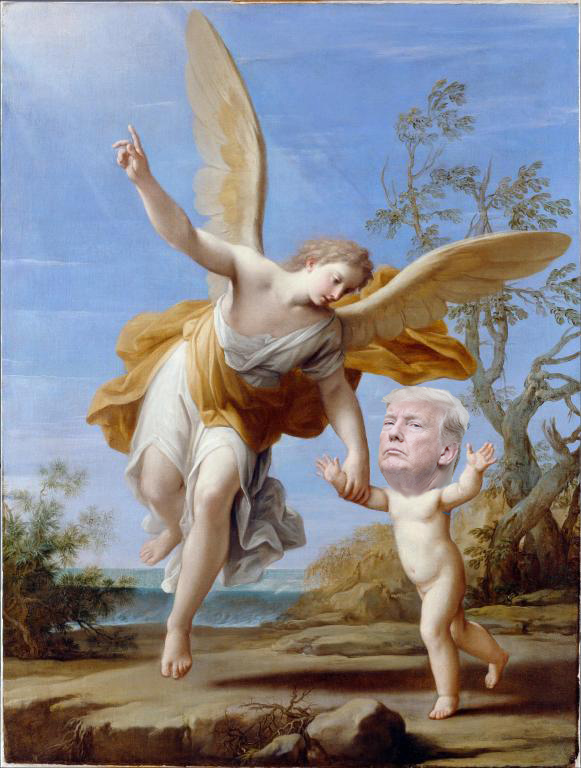 We hold these truths to be self-evident, that all men are created equal, that they are endowed by their Creator with certain unalienable Rights, that among these are Life, Liberty and the pursuit of Happiness.

Nice words. Especially since they were composed by white men who for the most part either owned other human beings or condoned the practice.  One of them, Thomas Jefferson, a so-called enlightenment man who is regarded as one of our greatest statesmen, owned a share, and, if you read his Notes on the State of Virginia, we’ll discover that he felt that blacks“are inferior to the whites in the endowments both of body and mind.” Moreover, while he thought that at some point slavery should be abolished, he also thought that African Americans should be sent back to Africa. Presumably, he would’ve done this after he jigged Sally Hemmings a few more times.

America was not founded on some notion that its first settlers, or it’s putative “founding fathers,” were some special form of human driftwood that had floated off of a Europe that had been unable to get it shit together since the default of the Roman Empire (which was no laudable human rights episode either). Columbus and those who followed him was prepared to wipe out anybody who might be in the way of their gold collecting project. The New World enterprise was also in support of the missionary minions of the Roman Catholic Church and its conversion/slavery methodology.

Today, that is all blurred and Bowdlerized American history. But one must wonder what it must be for a frustrated immigrant for refugee at our southern border. Even a cursory look at their faces should be sufficient proof that they are descendants of the indigenous peoples that occupy the areas of the American bordering states from as far back as perhaps 15,000 years ago. These lands were taken from them by force by the Spanish and the Americans along with their native religions and languages.  Their women were raped and their children were enslaved. In a number of respects things then we’re not too different than they are today. But today, they need documents in order to be able to visit their ancestral lands. If not, they will be regarded as criminals and separated from their own children. Upon this glorious foundation of political manifest destiny and Christian hypocrisy America was established.

The subsequent pilgrims to the north were no better, ready to execute any woman as a witch who might be seen as a challenge to the incipient patriarchy of religions that were, laughably, attempting to escape persecution when they were only looking for new ground on which they can practice their own torture. I have said plenty in these pages about the hypocrisy of America’s record with slavery, Jim Crow, and incarceration of blacks and minorities that continues to the point that we have a growing collection of videos of police executions in our streets. And now these disgusting events must share media space with the repression and abuse of women in every segment of our society, including the military.

I will leave aside our hypocritical foreign-policy for another time.

The lead I have taken too long to get to is my response to those who tend to regard the easily documented points I make in my first paragraph as some sort of unfortunate, but correctable, and of course, exculpable episodes in the great drama of becoming “the greatest nation in the history of the earth.” [Puke here]Genocide, slavery, oppression, injustice and the rest are represented like––“I drank beer, we all drank beer, sometimes I drank too much. Anyway, I don’t remember assaulting women’s bodies (Kavanaugh); but we all did it, so what the fuck”.  Brett Cavanaugh, like Donald Trump, is the true face-hole of America. Their attitudes, their self-serving rage, and their representation of the rage of those like them, is the true temperament of at least enough of America to become the dominant temperament of America.  We are a nation in denial of the ugliness of our history, the ugliness that is part of our national DNA. We are not all heir to it, but it is a constant of our historical narrative forged in mutually supporting forces of racism and evangelical moral superiority.

There are those who like to resurrect the idea of what Abraham Lincoln called the “better angels of our nature”.  Well, I hate to take issue with the Great Emancipator on this one, or historians like Jon Meacham, who also seems to think Americans may have “better angels” to appeal to for our redemption. But I don’t believe in angels, or in angelic temperament. What I do believe is that we have a nation with a significant and powerful cohort of deplorable, angry, bigoted motherfuckers, and we are not going to achieve their repentance by trying to be angelic. They are what they are because they wish to be as they are, and we need a righteous level of anger to meet theirs and to vanquish them as the sectors of the agenda of our political process and it’s moral and ideological foundations.

Politics is never been about nice; it’s about winning. And, if you win, if you are in power, you don’t have to be nice. You don’t have to be the better angels in any absolute sense, only in an eristic sense.  The “best man” that wins is not necessarily the best man. Barack Obama might have been our so-called “Best man,” but he was anything but the best man for the job that needed to be done. He was the best black man to be president because he was the only black man ever to be president.  As soon as the racists understood his almost pathological need for acceptance and approval, his compromising nature, which his enemies saw as his fundamental weakness, he was played for the eunuch he turned out to be. Obama hoped. He hoped racists would like him, and hope does not get that job done, any more than “better angels.” Obama sought their better angels, they played to him for Jefferson’s black man, and his accomplishments ended up being that he played a lot of golf with John Boehner.  .” Remember the crazy lady who called Obama an Arab and had to be corrected by McCain? Well, she’s baaaaack, sitting right behind Trump at one of his rallies.  In a perverse way, Trump is Obama’s creation. The very successful audacity of a black man who thought he should be president was sufficient to rip off the ugly scab of American racism and give it an appropriately ugly face and voice.

This does not mean, for example, there are better angels needed to convert those angry white Trumpian men and women, those white supremacist politicians, the bigoted and stupid. I say “screw them.” They certainly want to screw those they despise. They don’t need to be converted, they need to be politically vanquished. They will never be converted. A half-million deaths in a Civil War proved that.  We have had more than 200 years to appeal to our so-called better angels, and the racists of America are not interested. They cannot be allowed to play their white supremacy, their biblically-based moral certainties, their tax cuts, and entitlements, and most of all their angry vents and mass murder at the rest of us when they do not get their way.

If stupid evangelistic Christians want to homeschool their unvaccinated kids or teach them nonsensical bullshit in their own schools, let them; if stupid coal miners want to continue to get black lung in their dead-end jobs, let them. If they wish to extinguish themselves with any of the life-threatening prospects of their climate change denial, we obviously cannot let them. Let us not let them divert all our resources, and pervert all our rights so that they can do that. They can benefit from clean air and water that the rest of us to make available, but let them not take away our healthcare, let them not run amuck with their guns in our schools and streets, give more of our wealth to the wealthy, and bully the rest of the world with our military might.

What I’m saying here is that the model, or the metaphor if you like, is not some fanciful contest between good angels and bad angels in our nature. There are those of us who are morally and ideologically better than them, and they are not just misguided versions of us. Trump and Kavanaugh and their like are assholes, and vicious dangerous ones, pure and simple. We must believe that we are better than them if we are to beat them. The metaphor is war, and our anger has to be better than theirs, not our angels.

Well said. The anti immigration sentiment from whites are because they don’t want to be out numbered and have the American culture change to a more Latin one. There is hate in all the races and only love will conquer hate. But only and if the white man economy circumstances is good. If he’s struggling and blacks and Hispanics are doing good they will be blamed because white males think they are the only one entitled to a good life. Lascelles

I concur. But I would add with that our racial antipathy is not confined solely to comparative economic circumstances. Unfortunately, American Evangelical to Christianity as long been a substantial part of this problem, with its justification for slavery and white supremacy. Don’t just blame the the DOW, the FED, and the GDP, but also the Father, the Son, and the Holy Ghost. Amen.

Are you saying that America was founded on “pure greed”, and that there were neither new ideas nor new inspirations, bur someone who wanted land and gold, who would even obey to the Roman Catholic Church if they had needed to?

Yeah, that’s not a bad interpretation of what I was saying as far as the greed is concerned. Remember, America was colonized greedy European empires. But when we ourselves took over it was basically laissez-faire capitalism, something that makes greedy people very happy. Basically, I am saying that America was fundamentally hypocritical and corrupt, and that it has been in denial about it from the beginning and now it has it’s true face and Voice in the form of Donald J Trump.

Does it have any good people? Of course; I’m here.

You have always been my favorite cousin!
Luv ya

What about the Roman Catholic Church part? The church has influenced Europe through out the Middle Age. Do you think its influence was the same for the young American? What about about the origin of Thanksgiving? Was that out of greed too? Or, should we change it to St. Sebastian Day–to remember “A few good men”?

Haha, you ARE the St. Sebastian.

Ah, that explains those annoying arrows.