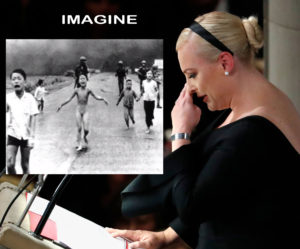 In a strange way today’s funeral orations delivered by the likes of Barack Obama, George W. Bush, Miss Lindsey Graham, and even, can you believe it, by unindicted war criminal Henry Kissinger, not to mention McCain’s daughter, Meghan, came off as much a hoped for funeral oration for the presidency of the conspicuously absent Donald J Trump.

None of it did much to alter my opinion of John McCain as rather a phony and a fuck-up of low or minor accomplishments, and perhaps whose greatest accomplishment was acting as the impresario of his own departure. It may be that his greatest accomplishment for the political party whose descent into depravity and absurdity he helped urge along with even more than his willingness to accept an idiot as is presidential running mate, might be that he allowed his funeral to be used as an opportunity for his wimpy, craven, hypocritical, ass-kissing, fellow Republicans to hold him up against the image a big piece of human crud like Donald Trump.

As we have come to know, politics of this age is all about image. Meghan McCain’s only claim to notoriety is that she is the daughter of a man whose principal claim to notoriety was that he was shot down over Hanoi, held as a POW, and turned it into a lengthy career as a political windsock. Her principal talent seems to be as a pudgy punching bag for women who are far more intelligent than her on a chat show call The View. Hers was the only eulogy I listened to, an overlong emotional roller coaster, the primary takeaway for me being that she kept asking her audience to imagine things about her father.

So, I imagined. Some of my imagination I took from my own flight into Hanoi several years after her father’s.  I try to imagine what it would have been like to be a young North Vietnamese child back in those days waiting for those A-4’s with their missiles and bombs to come over my city and surrounding countryside to blow me and my family to bits even though we had never committed an aggressive act towards McCain and his fellow Americans.  I try to imagine what it would be like to have a couple of million of my fellow citizens murdered in the same undeclared war against us.

Did Megan McCain allow her imagination to go into that territory, the territory of those millions of funerals that her father probably celebrated, that are the funerals of which soi-dissantheroes are made?  I doubt it. The job her father gave her at the end was to get up and contrast his much-bowdlerized legacy with that of the scumbag that his and her political party have nurtured into power.

“Hero,” “Great American,” and other encomiums resounded about the nave of our national cathedral today to the point of inducing vomit. Want to imagine the nation that seems to have fully lost its way from the national ideals it was never able to fully deliver upon? Then watch a funeral oration based on faked-up heroism of one Republican who summoned the guts to speak up against Donald Trump.

Frankly, if I imagine myself as one of those North Vietnamese who had to endure the slaughter that came in from those carriers in the Gulf of Tonkin and I found Lieut. Cmdr. McCain floating in my lake, I would’ve held his head under water for as long as it took. It might have saved some Vietnamese lives. t might have saved countless lives from the other American military adventures McCain enthusiasticly supported.  It certainly would’ve saved these past several days of American delusional, haighiogrcaphical bullshit. You see, Meghan, if you are really going to imagine, you have to put yourself in the shoes of the other.