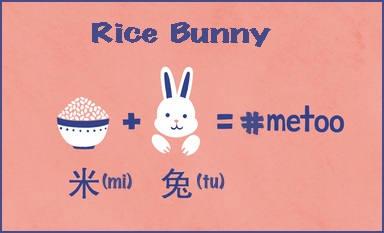 Chinese tonal rendering of “me, too”

I recently completed a book on the subject of religion. (It will be available soon, so be patient.) I did not, however, begin that book the way another older, and I presume what will turn out to be competitive book, began.  But here I will begin in the manner of that competitive book to introduce the current theme. It goes something like this:

Of course, one can see that this construction from Genesis raises some issues. By creating woman first, it does solve that most famous conundrum of creation–– Which came first the chicken or the egg?  With woman arriving first you can solve it from either direction, since she is both chicken, and the generator of eggs.  The hen precedes the rooster.\

Less easy to solve, however, is Why did the chicken cross the road? The answer to that one might lie in God’s second creation, Mr. Douchebag. BTW:  since God is almost always rendered as a male, I guess that makes him a douchebag as well.  But his masculinity also helps validate my syllogism. If God exists first amongst all of existence, and God is a male, he is presumably in possession of a penis, which would be a superfluous appendage without the existence of a female ( I don’t have to detail this out any further for you,  doI?). Genesis itself provides a logical motive for the primacy of Eve. You go, girl! So why did Ms Chicken cross the road? (You can see that I am not frightened off by these deep philosophical questions that gave the likes of Descartes and Kierkegaard the shivers.) Probably to get away from Mr. Douchebag and his gropey hands, clucking “me, too,” as she approached her clutch of sisters on the other side.

So, did Harvey Weinstein trigger #ME TOO movement by prancing about naked in front of women who likely found his nether parts indistinguishable from his ugly mug. Or, is this just some sideshow in the drama of human genders that probably began on some east African savannas several hundred thousand years ago?

Now, by this point there must be some readers for wondering why and what has caused me to seemingly rat out my own gender. I could say that I have grown weary of the whining and protestations of a couple of fortysomething guys I know at the café whose lack of success and satisfaction with women, according to their own accounts, has inclined them toward an abiding and vocal misogyny. They appeared to have arrived at a place much closer to Trump’s “pussy grabbing” than Philippine President Rodrigo Duterte’s instruction to his police to shoot female communists in the bisong (Tagalog for vagina).  Nevertheless, within these parameters appears to lie a good deal of the history of nasty male attitudes toward females. Yes, and I should I hasten here to add: “Oui, Madam Deneuve,” some women will overreact in the atmosphere of #MeToo; but, over such a long history of transgressions against their sex, they have a lot of catching up to do,  and might be forgiven some excessive fervor.  Such is the human condition that neither gender or is without his faulty inclinations.

There are a number of directions from which I might trace my arrival at the conclusion that the female gender is– –and here I must invoke its consistency with my norms– –superior to the male. I would begin with anthropology. Somewhere deep in our hominid past, when we came down from the trees and onto the savannas, males might have begun to evolve their physical superiority, and what sets them on the path to behavioral inferiority. Perhaps it was around this time as well that females evolved to where day were not in almost constant estrus. Perhaps, too,  it was that the savannah grasses, for safety sake, required males to remain upright during coitus, that gave them a superior position. Who knows for certain; it could’ve been several variables. I am inclined to the estrus hypothesis, since, whatever its cause, it would have rendered, at a time in which human beings were as much prey as predator, females to become restricted to the less risky gathering side of the hunter-gatherer equation.

For me, at least, this fits my overall hypothesis of the superiority of females in other ways. Moreover, I am inclined to the view that this biologically enforced sedentariness amongst females also cast them into the role of the creators of home, hearth, garden, and storehouse—importantly, all of the proto-elements for the foundation of urban settlements, without which we would not have seen the eventual decline of paternalistic and male-dominated pastoral nomadic societies.

Women, I would maintain found themselves in a different, perhaps more collaborative, social context, in their early Neolithic settlements, then males did in their hunting context. The men needed to develop more effective weaponry and the skills to apply them, but the hunting context, although certainly requiring some degree of cooperation, could also easily turn competitive. In contrast, it is just as easy to imagine females (often rendered even more sedentary by pregnancy) discovering the beginnings of agriculture (the garden) from dropped and germinated seeds, engaging in the beginnings of an animal domestication from orphaned canines and felines, and importantly, involved in the development of storage systems of pottery and basketry to keep grains and other foodstuffs free of vermin and to maintain a surplus against times of want and for eventual trade.

These were essential proto-urban elements that fundamentally changed the trajectory of human development too numerous to repeat here.  And, it was probably accomplished mostly by women. Permanent settlements required cooperation, consideration of the spatial needs, or rights of others, in some forms of planning and regulation, however simple and modest. There is no ineluctable reason that the most civilizing prospects of urbanization should necessitate nonviolent and democratic forms of government; but it does seem reasonable to assume that city might live longer and prosper where the more male inclinations towards economic domination and warfare do not prevail.

So what happened? How did it come to pass that it was men who ended up running the world, and fucking it up?  Stay tuned for part two.   Meanwhile, go Rice Bunnies.  [Stay tuned for Part 2]