Vol.103.6: THOUGHTS AND PRAYERS FOR BABYLON 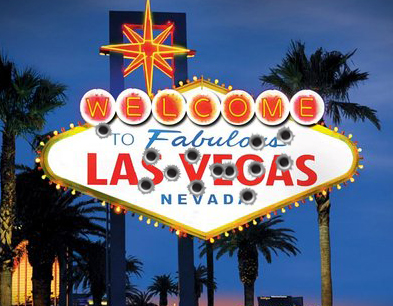 Las Vegas is a fake city, a national casino, whorehouse, and gun show venue founded by organized crime in the desert and dressed up in the icons of real cities. Having no historical renown or other raison d’etre, it offers in its imitative structures a faux New York, Eiffel Tower, Venetian canals, Egyptian ancient Rome in lieu of any urban originality.

I am already on record as having little more than contempt for Las Vegas, but that opinion is only enhanced by the mass murder at the recent country music concert that took place within effective ballistic distance from the Mandalay Hotel perpetrated by one of the city’s frequent high-rolling patrons (and collector of assault weapons).

Not being a Muslim, immigrant or person of color the perpetrator almost gets a free pass. Totally baffled by an undiscoverable lack of motive, Stephen Paddock seems almost to be regarded by authorities as just some white guy with a vague grievance and an arena to give it vent. Media give the Mandalay, a hotel that totally failed in its “security” by allowing over twenty firearms to be checked into one of its suites. Of course, Paddock just might have been returning from a shopping expedition at one of the fifty or so gun shows that Las Vegas hosts every year. Let’s add hypocrisy to the list of excesses of this social septic task.

There is now almost a numbing standard routine to America’s mass murder events.

The Responders are usually the first (as they should be), and they are always portrayed as “heroes”. Heroes are very essential to the “exceptional” American character. This is not to take anything away from people doing the job they signed up for, but everybody cannot be a hero, or the term is even more meaningless than it has come to be. In any event, the police chief or some local pol will get up before the mics and not miss the PR opportunity of a mass murder. There are other “heroes,” but we will leave it to the smarmy, wimpy media to extol them.

Quick to grab the microphone and the PR opportunity are the Preachers and comforters. Nothing triggers my regurgitive reflex more than the self-important pomposity of preachers blubbering and beseeching their Great Sky Fairy for interceding in an event that they never ask why this was part of “God’s plan.” Why they never seem to pray for better gun regulations, or that perpetrators be divinely denied their opportunity does not seem to fit into these orgasms of supplication. The sheer absurdity of where God figures into these dramas seems smothered in the melodramatic piety of these phonies. God has blood on his hands. Close behind are the legion of counselors and psychobabblers whose time might be better spent trying to figure out why our country has this self-abusive love affair with firearms.

The Pols are always ready with their spins and denials. The one they have used time and again—“this is not time to bring politics into the discussion” (while we are busy doing that “thoughts and prayers” thing and figuring out how to keep those NRA donations flowing). Of course, we know most of them to be sleazy, opportunistic hypocrites, and so they will speak of how these tragedies anneal us Americans into a stronger, more unified (now there’s a laugh) nation. They can’t get themselves to call this one “terrorism,” so the bullshit piles higher when you don’t have a Muslim or person of color to go off on. So, off to see Wayne Newton or Celine Dion or some other crappy glitz show.

The Victims. The media love to tease out those human interest stories from the carnage and chaos of the newsworthy moment. Finding the right “hero” or victim can make a journalistic career (unless you are a complete fuck up like Wolf Blitzer). I listened to more of these than I should have on NPR (which has succumbed to the bullshit false equivalency journalism of the rest of the media). But one remains significant. Steve Inskeep of NPR interviewed the father of a girl who had been badly shot, but fortunately survived. The father, a parole officer or something like that, had come up from Texas to be with his daughter. After discussing the girl’s condition Inskeep asked the father how he felt about gun control. The father said he fully supports the Second Amendment, carries a firearm himself and sees no need for regulation. In fact, he does not blame the shooter, and certainly not any of the guns he used (“guns do not kill people . . .”). So Inskeep, follows with a question as to who is responsible for his daughter getting shot. No, is wasn’t the daughter, or country music, or even Las Vegas; it’s because, the father answered without missing a beat, “we have became a godless nation.” Inskeep did not ask how God picks out the sinners (Jesus, this is freakin’ Las Vegas! It oughta be easy) when his instrument is a guy firing into a packed crowd of twenty thousand.

The Media are, of course, our conduit into these events, probing with their cameras, interviews, and authorities and experts. They love this stuff; if it bleeds, it leads, and there is a lot of blood in these events. The can milk them for days and weeks. These days there is much less trust and confidence in the traditional media than there used to be, no avuncular Cronkites and now cable and the Internet full of phonies and outlets with agendas that have sundered journalistic credulity with outright lies and “fake news,” propagated by the same interests to whom creating distrust of the media serves their ends. The exemplar of this methodology is the President himself, a mendacious creep who is in many respects a literal product of the media, and able to castigate and denigrate it with impunity. They slavishly follow him for his audacious newsworthiness in the perfect masochistic-sadistic relationship.

Soon the thoughts and prayers will dissipate and Las Vegas will return to its essential sinful purposes and the nation will await its next mass suicidal event. In this case “What happened in Las Vegas will definitely not stay in Las Vegas.”

Oh God of Sin City, where , we implore thee to have a care for the souls, and bodies, of those who worship at the altar of country and western music and so cruelly and untimely brought to grief by thy hand that guides the aim of they servant murderer. If thou must have blood, let just one time thy hand smite the firearms profiteers and their enabling political hypocrites.

And, Lord of Chance, while you are at it, if I double down on a pair eights at the Black Jack table, could you . . .

Is it time to move to southern Italy? I was thinking of southeast Sweden but saw the news about the Nordic Resistance Movement marches during the Jewish holidays.

My brother you are so right about how because the guy is white the mass shooting wasn’t labeled terrorism. I guess it’s a word reserve for muslims and people of color. The killer sure did get a free pass. The media didn’t even want to show his face. Many of my veteran buddies tell me after traveling the world that America is the most racist country of them all.

Brother Sim, I, too, have traveled the world. Racism is almost everywhere, but America practices it with hypocrisy, and has right from the beginning. Check this out: