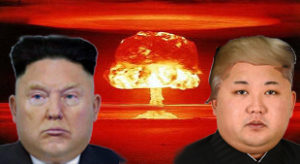 The last nuclear war was a one-sided affair. It was the only nuclear war, the one the USA unleashed on Japan in 1945 to bring the Pacific War to an end. Although they might have killed more than two-hundred thousand Japanese the bombs dropped on Hiroshima and Nagasaki were firecrackers compared to the nuclear warheads that have been developed in many countries since, and that are now deliverable by missiles that make the Enola Gay seem like a toy. I have stood at ground zero of both Nagasaki and Hiroshima and they are places that have recovered; the sites of the next nuclear war will likely be radioactive deserts for centuries.

The technology has changed, but the people who wield it still include some of the same old assholes, most of them fueled by religious-ethnic hatreds (India, Pakistan, Iran, Israel), but also by certified tyrannical-maniacal jerks like Putin, Kim, and Trump.

The US is the only country ever to use nuclear weapons and it now has nearly 800 military bases round the world and a fleet of nuclear powered and armed submarines to handle any interstitial areas. It’s more than enough to make us the biggest, baddest international bully that operate from everybody’s neighborhood with impudence and impunity.

A major behavior of US international bullying is to act as the self-appointed decider of who is, and who is not, allowed to develop and possess nuclear weapons. The US likes to present itself as a noble defender of human rights and democracy—two of its finest hypocricies—and hence above question or reproach as regards its use of its immense arsenal to intimidate states it deems as unworthy of the same self-defense (and offense) it arrogates to itself and its allies. In Trump the US has a personality that that perfectly reflects the arrogance, self-aggrandizement and bellicosity it has exhibited internationally, especially since the end of the Cold War.

It is likely that the US will initiate or provoke the next nuclear war. We are a country that legalizes stupid and insane people carrying guns and can’t understand why we have some many gun deaths. And we began the nuclear arming of the world with the same stupid notion that only good guys would haves guns—our local equivalent of the notion that only good ole US of A (and select allies) would or should have nuclear weapons. And now we are in the proverbial bar fight with two of humankind’s most extreme assholes ready to blow up the whole bar by setting off a political chain reaction.

America has decided that N. Korea is undeserving of nuclear arms. Even their testing of missiles fired untargeted into the open ocean are regarded—as dingbat American UN ambassador Nikki Haley stupidly asserted, was an act of “aggression” against the US. The only act of aggression was Haley’s falsehood against the truth.

But that still leaves the question of why Kim wants nuclear toys like the big boys.

The N. Koreans saw what happens to the guy who gives up his guns when Ghadaffi did, or what happened to Saddam when it turned out he really didn’t have those WMD. America doesn’t look for a fair fight, but only one they are assured of winning (even the fights they lose). Like Trump. Kim knows that the only way to fend off a bully is to let him know you are ready to make him pay, even if it costs you everything. And he’s counting on Trump being the punk he has always been. He’s counting on America letting this one go if the price is Seoul, 30K American troops in S. Korea, Guam and Tokyo—and maybe a few American metropolises. He might be counting on this little bar fight being the wake up call to the stupid Americans that will get them to rid themselves of the maniac they gave the launch codes. He might be counting on the American military-industrial complex using this “act of aggression” to bloat their already bloated budget—but that Americans don’t really have the stomach for a bloody fight when they can barely handle a bunch of guys in sandals who are more willing to die for their beliefs than they are.

Nearly 65 million Americans (less than a third of whom cold find N. Korea on a map) voted for ego-maniacal jerk President of the USA. The population of N. Korea under the tyrannical rule of ego-maniacal jerk Kim Jong Un is 25 million. These dictators are joined by more than weird-ass hair-dos; they are essentially the same authoritarian monsters who demand total loyalty or will kill you or throw you under the bus. But Kim is not that stupid. He is more interested in defending himself and his dynasty than in picking a fight he is bound to lose. His defense is that he has to at least appear to be crazy enough to make that fight if he is pushed far enough.

The apparent default assumption of the American media is that it is N. Korea that is the dangerous element in this dispute, that it is building its nuclear capability to protect the tyrannical Kim dynasty. Of course: technically they are still at war with the South and its American ally that dropped more bombs on its territory and killed more of its people that it did on the entire war with Japan, AND included it in America’s “Axis of Evil” (one of which states was blasted into near oblivion and is now a wobbly US satrap).

SO, am I an unpatriotic, treasonous turncoat if I pull for Kim to make our arrogant chicken-hawk blowhard back down? Maybe even bring down his presidency (Oh, yeah, now we’re talkin’!) You bet. Yes, I admit I have always had a tendency to pull for the underdog, especially when the uber-dog is a braggart and a bully that considers itself fundamentally superior to everybody else—and if that isn’t Trump America what is? One might counter that I am therefore taking a position against the poor, tortured N. Korean people; but they will be hardly better off if they are all incinerated. Sad as their lot might be we are no worse off for it.

So, in the end, I see this bullshit about how dangerous a nuclear N. Korea is as little more that the same old bullshit that the military industrial complex serves up against communism or ISIS, or whatever serves their interest. Kim might not be the lesser of two assholes, but he is probably the lesser of two evils. The fact is that Kim Jong Un and N. Korea are far less likely to ever do as much harm to America, nor can they, could they, or even would they, than Donald J. Trump will do. Consequently, in the war of bellicose rhetoric I wish for the victory of Kim. That is what the world has come to.

So, the lesser of two evils.

So it seems to my analysis of the consequences of this contretemps between two psychopaths who don’t give a damn about the people the rule. But, to me, Trump is clearly the instigator in all this. He has the capacity to do much more damage–and will. Think about it: if you had to pick one of these two guys to be hit by a bus, who would you pick?