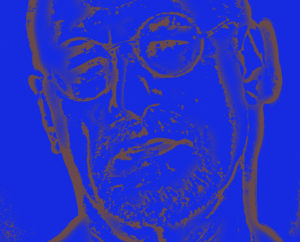 No, it’s not one of my typos.  You read it correctly—Homo Sepia Sapiens.  What the hell is that, you ask? I don’t blame you; a lot of the things I write provoke a WTF reaction in readers, but that is not my intent this time. I want to speak to you about melanin. WTF, you say. Yeah, melanin. Christ, it’s not a subject like “how are babies conceived,” that can make some people little uneasy (although, if you can say WTF, you are part way there).

I’ll start this way. I once had a girlfriend who is, as they say, “of the Asian persuasion.” We had been together a while before something in a conversation we were having prompted her to preface a remark with “you White people.” (This, by the way, while her arm that was at least three shades lighter than mine, rested beside mine.)  You could’ve knocked me over with a chow mein noodle. Nobody has ever called me “white guy” before and, I suppose, if I was from Mississippi and had a truck with a gun rack and a rebel flag, I would’ve been so flattered I would have put on my KKK robes and burned a cross on some Black family’s lawn.

Instead, I was slightly insulted. I don’t particularly want to be regarded as White. White has become a dirty word, paradoxically, the whiter the dirtier in my world. White supremacist, White racist, White Republican. Yuck!  Who wants to be associated with these lower human life form scum. But my contempt for the social appeal of a bleachy look makes me quite different from a lot of people, and people of color, like my former girlfriend.

Anyway, objectively, I’m not white.  In previous treatments of this subject, I have referred to myself as being “swarthy guy” who hailed from a land called Swarthia, but that just feels a little too colloquial these days, and people just can’t seem to find Swarthia on Google maps. So, I needed to come up with a new category that fits my complexion. Not only that, I wanted it to have a scientific ring to it as well as a deep paleoanthropological resonance. It could not be “Brown man” since that one seemed already taken. But it was somewhere in that chromatic range of melanin––chestnut, umber, taupe, russet, tan, beige, “off-white?”—that I belonged.  It just needs some scientific-sounding anchor, something like homo habilis, or homo Australopithecus.

So that’s me—Homo Sepia Sapiens. I kept that sapiens in there as a warning:  Don’t call me White!

Jim,
If I remember correctly you are a shade of “off white.” It is considered a designer color according to the paint charts. In fact there are multiple shades of white. Go to your nearest paint store and be color matched. I like the swarthy look but it can’t be classified as a color.

“Off white” has a not-quite-right connmotation about it, although it might be the quite right reference to me. And shade conveys a notion of “shadyness” does it not? I suppose could have gone with bianco in Italian (my mother’s maiden name was Bianchi), but White has just been ruined for me, designed or not. I’ll stick with Homo Sepia Sapiens for now (until too many stupid White guys think it means “Smart Gay Mexican”.

Jim, you’re a Munsang Boy–no question about it.
Happy Thanksgiving.

Same to you, Munsang Brother