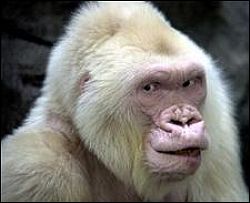 Since it has been all over the media everyone must have some awareness of the incident at he Cincinnati Zoo of the 4-yr-old boy who fell or jumped himself into the gorilla enclosure, where he was met by a huge, 450-lb, lowland male silverback (who incidentally was not there of his own volition) without any signs of aggression on the part of the simian. After some minutes, as video shows, in which the gorilla, named Harambe, seems rather protective of the chilled from the screaming crowd of human onlookers, zoo staff shot the animal to death.

Simians have not only been exploited by being incarcerated to be stared at in zoos, but have almost formed a genre in the cinema in King Kong, Mighty Joe Young and Planet of the Apes, Tarzan movies and the occasional serious treatment like Gorillas in the Mist. They have also been a subject of commentary in these pages. I have never met a gorilla, but I have met a lot of humans, who I find a lot less appealing. We homo sapiens(?) are supposed to be more cognitively-advanced than our close DNA cousins, but don’t count in those stupid parents that did not supervise their 4-yr-old son.

Gorillas are vegetarians, and the formidable males are usually only aggressive if their territory or troop are threatened. In similar incidents at other zoo people have not been harmed and gorillas have not be executed. Of course, this is America, and the animal is dark-skinned, which vastly increases the chances it will be shot and excuses (“the gorilla looked like he was reaching for a lethal banana”) and exoneration (“the court found that the gorilla did not respond to police demands he put down the yellow weapon”)

One can only wonder what the Harambe’s chances would have been had he not been so darkly-pigmented. That thought puts me in mind of The White Gorilla Joke, which goes like this:

There was this zoo director who was obsessed with having the rarest animal in the world for his zoo—a white gorilla. But there was only one hunter who knew how to find and capture a white gorilla. So the director went to Africa and looked him up and hired him.

So they went off together into the hills of Uganda. All the hunter had with him was a dog, a net, and a pistol, but he told the director that he might have to provide some assistance in the capture.

It wasn’t long before they spotted a white gorilla up in a tree. So the hunter went up to the tree, which was rather thin and shook the tree real hard. The gorilla fell out of the tree and landed on its back, slightly stunned. Immediately the dog rushed over and clomped his jaws on the gorilla’s balls. The gorilla froze and the hunter threw the net over it.

But it happened that the gorilla was rather small and the director said he was hoping for a larger one. The hunter said it would be no problem and he released the gorilla that scampered back up a tree.

Not long after they spotted another white gorilla, this one higher up in a tree, but one could see it was a big adult male. The hunter tried shaking the tree, but this time the trunk was too thick, so he handed the net and the gun to the director and said to follow his instructions quickly and precisely. And then the hunter proceeded to climb up the tree.

The hunter climbed high up into the tree and onto the same branch as the gorilla, which was very large and minding its own business. The director began shaking the branch. But the gorilla easily held on. The director shook harder, but to no effect. Then, the gorilla, with an angry look on its face, grabbed the branch in nits powerful hands and shook back. The branch shook violently and hunter tried to hold on, but lost his grip and fell from the branch, heading toward the ground below, and his Tarzan-like yell could be heard all through the jungle . . . Shoot . . . the . . . dog!”

There is nothing funny about either this incident of the loss of a rare and innocent animal or of the losses of innocent humans under similar circumstances that it brings to mind. Clearly, somewhere along the line of evolution we humans split off from these pacific simians into our own ultra-violent line of homo jerks.