President Obama became, today, the first American president to visit Hiroshima, Japan, where at the site near ground zero he made a speech that was unapologetic, but expressed “respect” for those who were the victims of the first “atomic” weapon. It seeded also an apt occasion to reprise a posting that followed my visit there almost three years before. 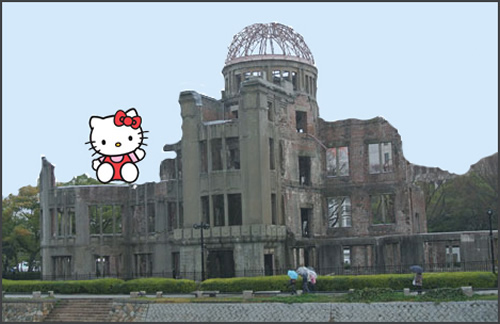 We straggle off the bus in a heavy downpour and, across the narrow river looms the domed building that has become iconic of the occasion of the first nuclear explosion in anger in the history of human aggression. I had seen it many times before in grainy photos of the devastated landscape of Hiroshima—August 6, 1945—now retained as centerpiece of the “peace park” despite having been nearly at ground zero.

Curiously, our guide Fujiko (not quite her real name), smiles at me in the gale cold blowning rain, asking me if I got a good photo of the “dome,” as if I were getting a snapshot of her kid wearing a Hello Kitty mask, or some such innocent visual of Japan. It’s like the denial with a smile is in perfect working order.

I suppose that being a guide for Westerners, and particularly Americans, to a site that fairly screams of ugly defeat, can’t be easy for the attractive lady with the ready Japanese welcoming smile. She speaks about the event that brings us all there with a dispassionate detachment—the blast, the firewind, the 130,000 killed—as though it was some other country’s ancient history, not just something in the lifetimes of most everybody on that bus. Maybe that’s the only way to do it. But I wonder.

Does it come with the Japanese DNA, the insular isolation, or the operant conditioning of a bowdlerized history in its transmission of denial from generation to generation: that ability to hold together a society that maintains a superficial Hello Kitty cuteness—what they call kawaaii—or the almost obsequious bowing and courteousness, with that subliminal mean streak we still remember,* but which they endeavor to deny away. Is it an aftereffect of the radiation?

This was not my first encounter with the thermonuclear conclusion to what the Japanese call (despite the verbal contradiction)“The Pacific War.” Some years before I had a similar experience in Nagasaki where, after wandering over the hill that was it’s ground zero I made my way to its “holocaust” museum where the curators appear to have intended that American visitors not miss their interpretation of the bombing; all captions and commentaries for the exhibits were translated into English.

One caught my eye in particular. It was a linear timeline titled “Events Leading Up To the Nagasaki Atomic Bombing” in text and photos that ran for several yards along a curved wall and lit with spotlights. The timeline was divided into yearly panels. The discomfort I had been feeling for much of the day gave way to astonishment when I read the English below the Japanese characters describing the “first” event: “May 5, 1943, The Japanese fleet at Truk Bay is proposed as an atomic bomb target at a meeting the Military Policy Committee.”

Somehow this didn’t seem to align with the history of events in the Pacific Theater that I was familiar with. To my knowledge there was no such decision-making organ as “The Military Policy Committee.” And why, except to add to the ambiguity of the statement, not specify “American,” or “Allied” policy committee. Owing to the curved wall I thought that perhaps the timeline started beyond the door, or around a corner. I looked there, and on the wall behind, but there was no sign there, or anywhere, of December 7, 1941. Excuse me folks, did you not see Tora! Tora! Tora!?

I did not come to Japan unaware of the deep strain of denial about the causes and events of the war that yet pervades their culture. The national paranoia of a long-cloistered island, the monarchism and militarism and, the sense of racial superiority that got them into trouble in the first place, have been modified and challenged by the war’s end and their nation’s impressive reconstruction and economic success. But the bomb did not obliterate those characteristics.

Most Americans of my generation have probably formed at least part of their impression of the Japanese city on one or two popular images. Mine were formed (and somewhat misinformed) on both such images.

The first image is of some guy in a silly-looking dinosaur suit climbing out of a soundstage pool and tromping through the center of a modular Japanese metropolis. The fire-spitting dragon, and related megamonsters, wreak wreckage and havoc in Japanese cities (and most recently, New York City) in a long-running series of cult sci-fi ‘B’ films.

The second image is more realistic, and more sinister: the vast panorama of flattened urban landscape and twisted towers and bridges, punctuated by the occasional shell of building of sterner construction, of Hiroshima, Nagasaki, or fire-bombed Tokyo.

In the first images Japanese and western movie actors overact in badly-synched dubbed dialogue, racing across the movie screen in search of the appropriate militaristic answer to vanquish the reptilian aggressor and save the city. In the second, newsreels and stills of shocked, scorched and irradiated victims of nuclear holocaust are grim testament that military might and technology can be a monster of more devastating proportions.

The two images are, of course, not unrelated. Godzilla and related monsters that are monstrosities of nuclear radiation seem an apt product of a form of cultural paranoia that may well have had its roots when Perry’s black ships pried open an unwelcoming Japan in the late 19th century. (True, a vanguard of Jesuits in their black robes had arrived three centuries earlier seeking souls and trade concessions, but that ‘God-zilla’ came ashore with less fanfare.) And not to be discounted are the gods of the seismic netherworld that have conspired to make this shaky archipelago perhaps the most perilous perch for human habitation on earth.

But how far does this go in explaining the exasperating inscrutability of the Japanese, perhaps humankind’s prime example of contradiction incarnate. Mind you, these are the folks that back in the 1930s arrogated to themselves the role as prime representatives of the Asian races against Western pollution and colonization while using borrowed Western technology to fist subjugate their “inferior” fellow Asians before taking their first disastrous step to getting their asses kicked by those “inferior” gaijin. Indeed, there are gut-churning examples of the most heinous racist behavior toward their fellow Asian Koreans and Chinese,** including the abduction of Korean girls as “comfort women” for their troops, the slaughter of some 300,000 Chinese in Nanking, and the merciless medical experiments on Chinese and POWs in Manchukuo.

Back on the bus somebody behind me asks Fujiko what Japanese school kids are taught about the “Pacific War”? I don’t look back to see if the questions comes from one of the Chinese among our group; Japanese bowdlerized textbooks have long been an irritant in Sino-Japanese relations. My mind swings back to that museum in Nagasaki and I recall the school teacher leading her grade school class through the exhibits —where they will not learn what happened on December 7, 1941. Fujiko lamely replies that they have a long national history to study and that they sometimes don’t get to cover the war. I feel like letting out a heckling meow, Hello Kitty-like.

*That mean streak shows up in the popular humiliation TV programming and in the practice of bullying in schools. See DCJ Archives 52.15

I may have commented on this before so if I have, too bad. It has always been a hot topic for me. I believe that deep in the Japanese psyche there still lives the spirit of Bushido. I truly believe that the Japanese have never admitted to themselves that they lost the war. This is merely a long strategic pause and at sometime in the future 大東亞共榮圏 Dai-tō-a Kyōeiken aka The Greater East Asia Co-Prosperity Sphere will emerge with the Son of Heaven and his millions of minions at the helm.

Trump has recommended they get nukes, which they might need if they ever decide to make war again since the Japanese (lack of) birth rate militates against “millions of minions.”