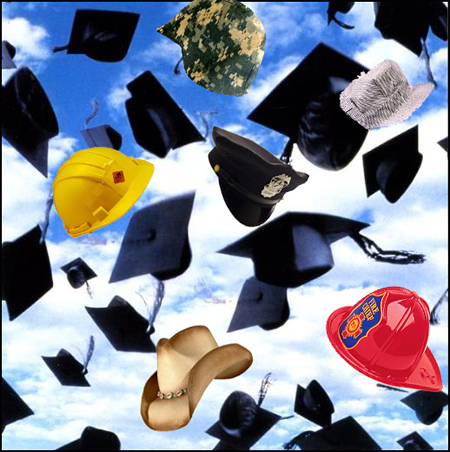 I’ll begin this essay with an anecdote (an almost sure indication of superannuation). Many years ago, when I was the director of the MCP program at SDSU, the president of the planners’ national professional organization, the American Planning Association was visiting San Diego and the local chapter hosted him. I went to the event, as did several of my students at the time. The president was finishing his tenure and returning to his post as director of planning for a central California county planning department. After his talk and Q & A he approached me and said that his department would be hiring some new staff. Then he asked, “do you have some good subdivision regulation people, and maybe a zoning specialist I can interview?

The question struck me as rather odd. I had this image of our graduates hanging on hooks in some inventory room, with little labels above their heads indicating their specialties. When an employer called for one of them we would take them down and ship them off, just the right fit for some bureaucratic cubicle and some routine job that would likely bore them to death after six months.

I replied that we didn’t have any of “them.” When he looked at me accusingly and asked “then what can they do?” I replied, “If they graduate this program, they can do whatever you need done up there. They understand the processes of urbanization and planning and government’s role in it; the rest they should learn on the job.” To my knowledge he never hired any of our grads.

I relate this little story because I think it is illustrative of a problem I have long had with the direction of higher education. Shortly after I was awarded my masters degree in urban planning I applied, as many young professionals do, to membership in the national planning association (then the American Institute of Planners, that later became the American Planning Association). It wasn’t just paying the money; I actually flew to Chicago and took an oral exam in front of a three-man panel. I flew back to New York a “made guy,” a “professional,” and the frameable certificate soon followed.

A few years later I had my Ph.D. and was directing the new Master of City Planning Program at SDSU, situated in the College of Professional Studies & Fine Arts. I specify this because it is the “professional” that never rested all that comfortably on my shoulders. Not that we don’t need professionals—indeed, in a age of expertise, we rely very much up all sorts of them. Competence, technical knowledge, some degree of ethical oversight, respectability, are not negative attributes associated with professions—but it is professionalism, what G.B. Shaw referred to as “a conspiracy against the laity,” that concerns me. Professions are also organizational structures that are subject to all the standard human failings of exclusivity, protectionism, and self-interest.

That universities have, in part, become handmaidens to the professions is a cause for even greater concern. SDSU, which has long had a Department of Recreation, a questionable university interest from my point of view, recently stretched the question with the addition of a School of Hospitality and Tourism Management. The “academic” emphases (from the departmental homepage) are: Hotel Operations & Management; Meeting & Events Operations Management; Restaurant Operations & Management; Tribal Gaming Operations & Management. In short, think “vocational school.” It should be noted here that there is financial interest for the university in providing hotel desk clerks and casino managers as tourism and gambling have grown in their share of the local economy. San Diego are Indian casinos have become a strong presence in several parts of the university, including the College of Extended Studies. But one wonders whether courses in aroma therapy, blackjack dealing and pole dancing might make it into the curriculum

.
This sort of professionalization of jobs that range from black jack dealers to computer repairmen, and a range of technical occupations that consist more of training than of education has been a boon for the variety of for-profit “universities” that have sprung up in recent years. Profiled in a recent Frontline documentary, these highly-profitable enterprises are able to take advantage of Federal higher education loan programs for their students as well as an economy in which a BA in the liberal arts and other curricula is no longer a guarantor of a middle class occupation. There may well be a need for trained technicians, but the ads of institutions like Phoenix University that show their graduate enjoying middle-class lifestyles belies the fact that many enrollees never graduate, or get jobs, or are able to pay off their student loans.

While perhaps most every university grad hopes to obtain a good job in, or related to, the field they have studied, the purpose of higher education more and more flies Icarus-like too close to professions. In the end all professions, from those for cardiologists to clergymen, will meddle in the curricula of universities to suit their interests and protection to the extent that they are able. Holding, as they do, the keys to exclusive membership, is the means by which they cultivate their influence. Professional societies, like the APA, exist for all professions and have become increasingly officious in their demands upon professional schools. Students are concerned that they are getting the knowledge and training that will eventually admit them to their professional societies and allow them to add a few extra letters after their names on their calling cards.

We are a long way from the days in which education related to specific jobs was the province of the guilds and our surnames—be they Sawyer, Cooper, Carter or Finstermacher—described our “professions” (I have yet to meet anyone named Programmer, Personaltrainer or Hedgefunder). And we are a long way from the days in which university faculty were all called “philosophers” (vestigially retained in the Ph.D.), and in which the curriculum consisted of the i or the quadrivium. Those were the days when there were few genuine professions and a lot of craftsmen and religions controlled university education. It was not until the 19th Century that the idea of a liberal education, one in which education was a form of liberation and involved critical and creative thought (and action), came into form. Since then it has been inexorably shunted aside in favor “professional education” that is increasingly an adjunct to societal corporate structure.

The downward creep of this perspective is evident in the educational policies of the Bush administration that appear to have been carried forward by the Obama administration. “No Child Left Behind” was a policy joke that favored privatization, religious-based schools, and thereductio ad absurdum that conflating learning and teaching abilities with test results.* This perverse synergy of corporatism and the increasing privatization of education that appears quite acceptable to the Obama administration under the direction of Secretary Arne Duncan.

I might appear inappropriate and indulgent to mourn the eclipse of liberal education (indeed the very use of the term in these times is likely to cause an onslaught of tea bags in some quarters), but it may just as well be argued that there is no more appropriate time for the sort of examination of values and critical thinking to be reasserted as central to the education enterprise. A focus upon the ethical features of life, and the underlying humanism of liberal education, is no guarantee against the sorts of abuses—the greed, disregard for the truth, the abuse of political power, and such—that are endemic in contemporary American society. Coming, myself, from a small Jesuit liberal arts college I will attest that too many of my fellow alums subscribe to social and political values (albeit, and ironically, morally wrapped in the deceptions of the Roman Catholic Church) that are contemptible.

But at least, liberal arts education approaches human knowledge as a work in progress, not as unquestionable received wisdom. To question, to doubt, to re-consider, is part of that process. Critical thinking, rigorous, scientific method, and logic are the parsimonious tools to the admission of truth.

Professional education differs in its greater concern for certitudes, for what can stand as a “corpus of knowledge” sufficient to bind and hold the allegiance of those who seek professional recognition and authority. In that sense, it must necessarily remain in tension with liberal education. But truth does not always trump professional respectability.

In a time when the practice of the Reason is assailed by the forces of Faith, our educational system must also remain aware that the insidious danger that lies beneath the cloak of professional respectability is a “conspiracy against the laity.”
____________________________________________________________
© 2010, James A. Clapp (UrbisMedia Ltd. Pub. 7.13.2010)
*Predictably, the filing of test grades is subject to the same cooking of the books as is financial accounting. The San Diego area private school that was caught re-handed inflating its students’ grades, is hardly an isolated case. When schools become privatized and “for profit” appearances can matter more than substance.