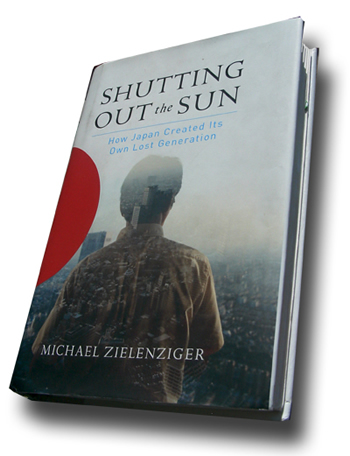 I have always had an odd fascination with the Japanese. The story goes in my family that when I was a baby I looked very “Asian.” My mother said that she was nervous about taking me out in the pram or stroller during WWII because people might think I was Japanese. There are photographs of me that support the story. But I don’t think that is why I am fascinated with Japan and the Japanese. I was fascinated by them even before I came to have three beautiful grandchildren who are a quarter Japanese.

Maybe it was the dubbed Godzilla and Mothra movies, with some guy in a monster suit tromping through a scaled-down city and spitting fire. Or, maybe it was those photos of Hiroshima, flattened with the new fire-spitting dragon of warfare that got my attention. The first images may well be a psychological product of he second.

All cultures have their weird stuff, but Japan, isolated and insular with minor intrusions until the mid-19th Century, is a place that developed a cultural exoticism of Galapagos extremes, yet with an astounding solidarity. I was once at an airline ticket counter in England checking in an American group I was leading. The counter beside me was a British Airlines and a group of about forty middle-aged to elderly couples were lined up to get their seat assignments. The couples were concerned that they might be assigned seats away from one another, but I overheard their English agent telling the Japanese guide to tell any concerned couples to say to the agent that they are a “honeymoon couple” and they will find seats for them together. I then watched, as astounded as the giggle-suppressing airline agent who served them, as one superannuated couple after another approached the counter and announced without the slightest expression of irony, “we are honeymoon cupper.”

It is a story that might fit someplace in Shutting Out the Sun. Conformity, to tradition, to social forms, to conformity itself, and the social response to conformity, is one of the defining features this book by Far-East journalist Zeilenziger. He appropriately begins with a discussion of the cases of several hikikomori, who are mostly young people who are unable to handle various aspects of Japanese society. They withdraw and hole up, usually in their rooms in their parents’ homes, often for years at a time, hardly communicating with the outside world at all. America may have its own hikikomori, in the form of the reclusive computer-game playing kids who can spend as much as eighteen hours each day with Grand Theft Auto IV, but hikikomori appear to have a more complex genesis than the western phenomenon.

Thousands of Japan’s young people are cloistering themselves from their society, ostensibly, according to professional opinion, because of its overbearing pressure to conform. Those who do not fit the norms—one of the reasons for hikikomori being that brutal bullying of “different” kids at school is a common and apparently not un-approved practice in Japanese grade schools—so better to drop out and stay home.

Were that some anomalous bizarre behavior, the emergence of hikikomori might be just an interesting article. But Zielenziger sees this phenomenon as almost a metaphor for the state of Japanese society today. In his view it is not only hikikomori who are “shutting out the sun,” it’s the entire society. That example of “honeymoon cuppers” is, for example, illustrative of the importance of “group harmony” to the Japanese. Obedience to harmony stifles independent action when everyone is always looking the approbation of the group before doing anything. Zielenziger, a journalist, provides the example of Japanese journalism, which, he writes, is dominated by “press clubs,” that essentially determine that Japanese newspapers carry “identical stories each day.” Japanese journalists also forge very tight relation ships with the politicians and other public officials they “cover.” The same group mentality results in a political system that is unchanging, the LDP being a single political party that has ruled since 1955.

The hikikomori also describes the features of the Japanese economy. Since WWII the Japanese have been locked in what some have called a “sensual embrace” of co-dependency with the American economy. Retaineing their sense of insularity Japan has employed merchantilist policies of minimizing imports and expanding their exports to accumulate huge dollar reserves. (Japanese have historically high personal savings rates as well, hoarding most of it in their postal system’s bank.) The rigidity of that economic system is partly responsible for the protracted economic recession of its economy through the 1990s.

The hikikomori mentality of the economy has also been problematic in several social dimensions. The Japanese “sarariman” or salaryman is somewhat legendary. Notorious for their allegiance to their companies (Zielenziger says his prime allegiance is to the firm, not his family), and for his group, he often works exceedingly long hours (hence spending little time with his family), and also engages in group activities such as heavy social drinking (see Morley, below). Descriptions of Japanese corporate behavior sometimes read like that of an immature American college fraternity.

The bonds and “lifetime job” guarantee of the sararimen were broken during the long recession, leaving many former workers with a habit for booze and rising psychological depression. Work stress, depression, and suicide are common features of the Japanese workplace; they even have a word for working themselves to death—karoshi. “In fiscal 2002, a record 317 cases of death from overwork were formally recognized by the national worker’s compensation system, in addition to a record forty-three karoshi-related suicides.” (P. 204).

Zielenziger uses the comparison of South Korea and Japan during the decade of the 1990s to illustrate what he regards as the inability if the Japanese to fit their economic practices to the global economy. The Koreans have comparatively done much better—in part the author argues due to their adoption of Christianity in greater numbers—because they are more willing to migrate and to accept foreigners and foreign workers and ideas. The grou0 and class traditions, lack of political debate and opposition, and single-party domination kept Japan closed and insular.

Perhaps the most publicized and controversial illustration of the refusal to change is the inability of the Japanese to accept full responsibility for the abuses of their colonial and military past and their racism. Japanese textbooks and museums still do not tell the truth about the origins o WWII and atrocities such as the Rape of Nanking in 1937-38. This keeps relationships tense with Korea, from which thousands of “comfort women” for the sexual use of Japanese soldiers during the war were kidnapped, and the Chinese, who were victims not only in Nanking, but in brutal medic al experimental facilities such as Unit 741 in Manchiria. Japanese schoolchildren grow up without the facts.

Other traditions contribute to the national hikikomori effect. The traditional Japanese family structure is built on the papering of boys and the commodification of girls. Boys are supposed o grow up to be wage earners and heads of new families; girls are supposed to follow their husbands to his home in which his parents may well reside, becoming a cook, maid, caretaker and breeder of the next male heir. However, that scenario has bee breaking down in recent years. More young women prefer to remain unmarried and pursue work careers of their own. In consequence, the birthrate has declined o the point where some villages and small cities consist mainly of old people, often with no family members to look after them. The work force has declined, which has not been helped by the Japanese resistance to admitting foreign workers into the country.

Zielenziger closes with an interesting observation. “Now, we in America run the risk of becoming over time as insular and isolated as modern Japan, as our two nations are apparently turning out to be enablers of one another’s social pathology. We have encouraged Japan to withdraw and retreat and to loyally follow our commands, while Japan has quietly bankrolled our own overstretched global ambitions. Like an overprotective mother of a hikikomori, we promise food and protection as long as the child agrees not to become too disruptive. This may be pushing he metaphor a bit too far; but then this book was published before American initiated the meltdown of the global economy.
____________________________________________________________
© 2008, James A. Clapp (UrbisMedia Ltd. Pub. 10.27.2008)

John David Morley, Pictures from the Water Trade, 1985.  See also, Alex Kerr, Dogs and Demons, The Fall of Modern Japan (2001), especially on the subject of environment and urban planning, and Nicholas Bornoff, Pink Samurai, Love, Marriage and Sex in Contemporary Japan (1991), if you like the kinky side of things.