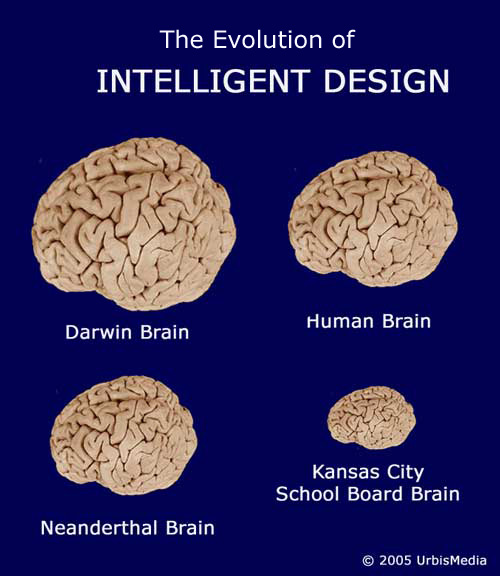 The genesis (oops, forgot to capitalize that word) of the debate over evolution lies is the ancient struggle between faith and reason, and its corollary battle between religious and secular authority, between what is written , and what will be written by minds that continue to inquire, not require.   In the end it’s about power ; threaten the truth of the Biblical literalists’ words and you threaten their power.   Pull one brick out of their foundation and you threaten their ability to build and maintain the wall of fear [1] around their flock.

The battle in America was fought back in 1925 at the infamous Scopes “Monkey” Trial in Dayton, Tennessee.   But that didn’t leave the matter settled; there’s too much power to raise money with the “written word.”    Courts and legislatures were back trying the matter again in the last quarter of the last century, when it was the “creationists” who were afraid of being called “a monkey’s uncle.”   They never went away [2] , and now they are back, in Kansas, where they are about to inject “Intelligent Design” into their school science curriculum.   Thanks to a fundamentalist-dominated school board, they can only go back to about 6006 BC[3] , since that’s what these creationists in scholarly drag believe is the age of the earth.   But that will be far enough to keep their kids’ understanding of science somewhere around the time of Noah. [4]

Right.   Not 4 billion years, which is about the time it would take any reasonably “intelligent mind” to “create” anything as complex as a single PBS nature show would indicate to you   – if you have a freakin’ brain in your un-homo sapiens sapiens head! Which obviously, some people in Kansas City do not have!

Ever wonder why Europeans wonder why Americans are such a bunch of nitwits.   Well, go to KC and sit in on the hearings they are holding, attended only by IE advocates, testifying that Charles Darwin, whose brain weighed more than the KC Chiefs football team, go it wrong.   These are folks who were selling roofing and siding not long ago, not taking a perilous voyage on the Beagle and years of subsequent study to compose The Origin of Species. [5]   These are the people who bristle at being “related” to “dumb” apes and chimps, when it is clear that it’s the apes and chimps that should be offended.   These are people who think that “natural selection” means that you always “super-size” your fries.

That’s the thing about these nitwit fundamentalist Christians, they think that people are really as stupid as they are, and that truth is really a matter of how many people your side can get elected to the school board.   They don’t care if their kids are equally as stupid as they are.   They are likely to care that if their kids are taught something that doesn’t square with the myth and poetry of the Bible, they will end up choosing the homosexual “lifestyle.”   But the rest of us should care, because school kids grow up to be doctors, airline pilots, and politicians, among other things, and you don’t want a doctor who believes the devil made you sick, or an airline pilot who doesn’t believe in gravity, or a politician who believes that funding “faith-based” organizations is more important than funding reason-based basic and applied scientific research.

Scientists have been clobbering creationists for years in any head-to-head confrontation.   The creation “scientists” (who never seem to do any science) are only good at exploiting one of the basic tenets of science, that theories are always subject to new test and evidence.   They take legitimate arguments that real scientists have with each other, which exists in all fields of real scientific inquiry, as “proof” that the theories are invalid.   They do not realize that scientists are not absolute Biblical literalists, but through rigorous tests, measurements, and the application of all appropriate branches of empirical science, seek truth, not mythical fiction.   And why should creationists do science?; they have neither a shred of evidence or anything that can be tested, that there was a “creator,” or that there is a “mind” out there somewhere that does “intelligent design.”

So, they must do their worst to tear down the record of science, to exploit its scientific introspections to their advantage.   They counter measurement and test with chapter and verse.   How such lazy-minded people will manage to reconcile their chapters and verses with the presence of a fossil record that radio-carbon dates to hundreds of millions of years (ask one of them to explain radioactive decay to you), or why the DNA of a chimp is so close to theirs they wouldn’t be able to see the difference, would take dropping a brachiosaurus femur on their head.

And, they may get away with this in their local school districts.   They may get it placed in their textbooks that evolution is “only a theory” [6] and that IE – which is really only dressed up faith – is an intellectually reasonable alternative.   But how are they going to explain to their kids when they get to, if they don’t in fact end up as Wal Mart stock boys and cashiers, why they are the laughing stock of their universities.   It is the children who will “inherit the wind.”

[1] I will have more to say on this aspect of religion in a forthcoming essay.

[2] Thanks much to Tim LaHaye, co-author of the “left-behind” books and founder of the oxymoronic Creation Science Institute in San Diego, California

[3] Awhile back some jerk added up the ages of all the prophets in the Bible, and came up with 6006.   Really scientific!   (Well, at least he could add) But did he use the Julian calendar year, which didn’t start until Julius Caesar?

[4] Never mind that had the world been entirely covered by water as the flood myth alleges the amount of carbon dioxide in the atmosphere would have been so great that no life would have been able to exist or regenerate itself.   But that’s only the beginning of the problem with the Noah story.

[5] And Darwin held off publishing because there were some dimwit creation science types around in England in his time.

[6] Which, of course it is.   All theories are sets of laws and propositions that purport to explain a phenomenon or a class of phenomena.   But they are backed up by a body of tested factual evidence.   What they are not, is faith.