It’s a symbol of filicide, when a god who remotely impregnated a virgin killed the issue of this coital conundrum to putatively atone for the sins of mankind. Weird. The story is only the kind of stuff that falls out of the back end of bulls that can come from First Century addled minds. Their symbol is the Cross, the symbol that is seemingly everywhere, at least in the United States. Some countries still laugh at a faith that would display the image of its executed “god” with pride rather than shame. And not much salvation is evident since the Cross became ubiquitous, but many have suffered and perished because of it. Because the cross is a symbol of power, not just faith, a therein lies this tale. 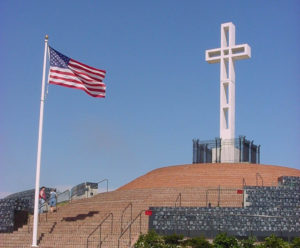 A very large Cross still stands on the summit of Mt. Soledad in San Diego. San Diego have been a largely politically-conservative city for many years and one that might be thought to be strict constitutionalist as well. But not when it comes to Christian symbols on mountain tops. The top of Mt. Soledad was public land and the presence of a Cross on it violated the separation of church and state. Several court decisions since the 1980s said it must be removed, but religions can be pretty sneaky, and so the “blancocruxians,” as I call them, wrapped a military memorial around the base of it to fend off the legal assault (and don’t forget the flag). Then they got congress to pass a law that pushes the City to sell the land to a private group (which paid $1.4 million), and bingo, the 9th Court of Appeals has ruled that those of other faiths or those who are offended by having crosses shoved in their face no longer have standing to appeal.

$1.4 million for a godamned cross that could have been spent to help find a cure for deadly diseases. What might Jesus have advised these double-crossing Christian hypocrites?

Can’t imagine Christ would like having his means of torture displayed anywhere.

To the likely regret of the late Mr. (Yeshua ben Yusef) Christ, once you are transmogrified into a religious-corporate icon you no longer have a say in the matter.

Guess I’ve had my head in the sand. I thought this issue was settled many years ago. Hard to believe that the damn cross is still standing. Sometimes I just hate this town– it’s like Trumpsville.

Seeing a cross every time one looks up in this town is enough reason to keep one’s head in the sand.

Hey Jim– I lost my head and said damn cross– forgetting your edit process. I will force myself to be more ladylike in the future (OMG, but that’s impossible– so I’ll restrain from commenting.) I’m sure you’ve noticed by now that women of a certain age have no filter– just the joyous freedom to say exactly anything– whatever comes out. So glad I’ve been around long enough to defy decorum. It’s the ultimate triumph and the best time of my life. Lory
Keep up the good work.

Hey Lory–Good grief! Please do not restrain yourself from commenting–with as earthy an un-filtered voice as my liberal interpretation of the First Amendment allows. You add panache, pizazz and perspicacity (an alliteration affliction). I would miss it.

Jim,
Great article. You said it all. I forwarded on to my sons .
Keep it up. Loved it.