Unless you have been badly hung over from St. Patrick’s Day you know that this weekend has been the 3rd anniversary of the beginning of Bush’s war on Iraq (a.k.a. erroneously known as the War on Terror). There have been many demonstrations against this war, but as usual, the nonsense about dissent being unpatriotic and giving “aid and comfort to the enemy” has been trotted out by the by the usual suspects who want to divert the criticism that is really directed at them to being against the troops.

I have been ruminating on a way in which we can show that dissent to be directly aimed at the idiot that started this whole thing. Hence I have conceived of an inexpensive way of registering that dissent so that you-know-who gets the message. As you will recall, that person once had a major problem ingesting a pretzel. So I have asked my Asian correspondent, Ba feng-gu, to lead off with a missive that any of us might emulate. I hope that you will be able to download and open his attachment below. 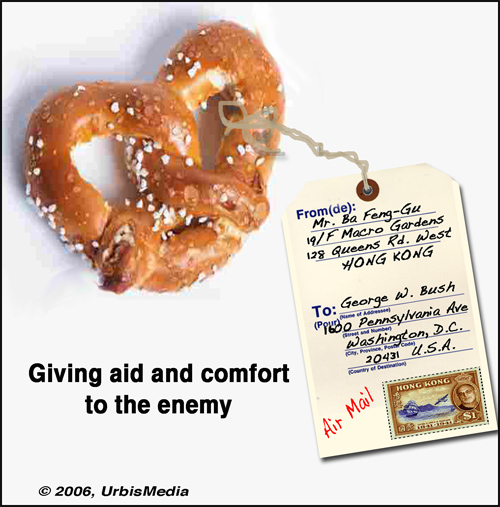 P.S. Do not send those good, big New York City soft pretzels. He doesn’t deserve them.